Sydney Swans' stuttering start to the season lurched to another low after falling 23 points short the Dogs on Friday night. A red-hot Franklin couldn't do enough to drag the Swans over the line, kicking 4 goals in a 15 minute burst.

The defeat leaves the Swans languishing in the bottom 4, playing catch-up with the rest of the competition. In both 2006 and 2014, the Swans made the grand final having dropped their first 2 games, so don't lose hope, it's still possible.

Dane Rampe was an early change for the Swans after breaking his arm during the week, and Foote was a late out for Aliir Allir, coming in for his first game of the season. Fox and Newman came in for Dan Robinson (shoulder) and Dean Towers (omitted). Sam Reid played his 100th game of the season.

The Swans started brightly kicking the first goal of the game just 45 seconds in. Reid rose highest and took a good contested mark and converted. It was the first of 6 goals, a career high for the maligned forward in his 100th game.

The Dogs were in the game, but couldn't capitalise on their early entries. The ball was getting into Cloke with ease, but with luck, he missed his chances. After absorbing some pressure, the Swans capitalised, kicking goals through Reid and Laidler.

While the Swans were leading by 17 points, it was the debutants that were leading the way, with Newman, Fox and Hayward all involved, and Florent up and about early. The Swans' early pressure continue to pay off and they Swans got their 4th of the quarter, Reids' 3rd, just over half way through. He was on fire early and taking big marks.

The Dogs fought back and goaled almost immediately through Cloke, after a big collision in the centre square with Jones and the resulting 50m penalty.

The Swans were held scoreless for the rest of the quarter as the Dogs were well on top. The Swans lead all categories early in the game, but the Dogs took control. The Swans had the first 10 clearances, but that quickly turned around.

The 2nd quarter kicked off where the first ended. They kicked the first 2 goals of the quarter to turn a 23 point deficit into a 2 point lead. The lead changed 3 more times for the quarter as the Swans and Dogs traded goals.

While the first quarter was blistering from both teams and fairly adjudicated, the 2nd quarter was where things started going wrong for the Swans. An Aliir mark wasn't paid when his arms were clearly chopped in a marking contest leading to a goal, as well as ridiculous holding the ball calls.

Florent kept the Swans in the game with an enormous chase down on the primadonna Johannisen. But the Swans couldn't keep the Dogs down and they goaled immediately through Cloke. The debutants were standing up, with Newman among the best and Fox always involved.

Hewett was the Swans' best midfielder, and was ably supported by Newman, Lloyd, Fox and Florent. Alarmingly, JPK, Kieren Jack, Dan Hannebery and Luke Parker were well down midway through the 2nd quarter and little changed at half time.

The 3rd quarter started off with the Dogs kicking the first goal in a minute, but the Swans answered back immediately through Reid. However, that's where the good will for the Swans ended for most of the quarter. While the free kick count at half-time was 16-10 to the Dogs, it was more than double the Swans count before the end of the quarter.

Watching the quarter was like being kicked in the guts all over again. Far too close to the disgraceful effort in the grand final by the umpires, the momentum clearly swung in favour of the Dogs.

But it wasn't all down to umpiring. The Dogs were on top in many categories because they ran harder, looked harder, and certainly were fitter. The Swans' leaders weren't having good games at all, and all 3 debutants were among the Swans top 6 possession winners.

While it all sounds like doom and gloom, the Swans halted the rampant Dogs with late goals to Reid, his 5th and Franklin, his first.

Then the fourth quarter happened. Franklin kicked 3 quick, ridiculously good goals, in the first 10 minutes of play. While he finished on 4 goals, they were all high quality and high impactful.

The Swans took the lead through Reids' 6th goal of the game, and the Swans were well on top, dominating across the ground. Kennedy, Parker and Hanners were involved and winning the ball, and Kieren Jack was doing something. Lloyd was on a rampage in the 2nd half and finished with 34 disposals.

But the umpires had to get involved yet again. Some absurd free kicks paid, especially the rushed behind against Mills from the goal square, killed the Swans momentum, gifting goals to the Dogs. The game was effectively over and the Dogs kicked 3 goals in 3 minutes. It didn't help that Cunningham refused to put his body on the line in one contest against Bontempelli and the Dogs started to get off the leash again.

After the Swans kicked 5 goals in a row, trailing by almost 30 points at one stage, the Dogs kicked the last 4 to win by 23.

Kurt Tippet left the ground early in the 1st quarter with a rolled left ankle. He came back on midway through the quarter and rolled it again, ruling himself out for the rest of the game. 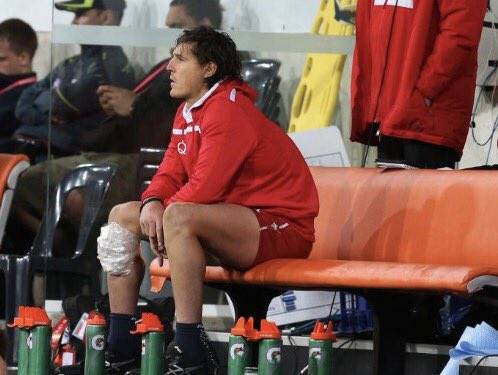 Swans will be looking to win their first game of the season against the traveling Pies at the SCG.

Player Ratings: vs Western Bulldogs Round 2, 2017

It's times like these, after years of being a passionate supporter, it's easy to be cheesed off and blame…

Callum Mills won't be joining the Blues Brothers in 2017