Morning all, welcome to another Monday, another week done and dusted. Unless you worked all weekend, had no access to TV or radio, don't have access to online print media, or lived in an area with no cell reception, I'm so sorry to remind you, its Monday. I hope those of you in the eastern states remembered to reset your clocks.

I hate Monday's and I've made no secret of it in the past. Sometimes, Monday's are great, when you can go to work and brag and bleat and annoy the Collingwood, Carlton and Essendon fans, and get stuck into the odd Hawks band-wagoner when they lose. But this isn't one of those weeks.

A sobering result against the reigning premiers on the weekend, was both wretched and enthralling. Many of the young and inexperienced players stood up, did their jobs for much of the match, but in the end, too much was left to the rookies. It's mind boggling that the rookies were clearly the best players in the first half, especially 2nd gamer Florent, 2nd year player Hewett and 1st gamer Nic Newman, amongst the best with Franklin and Reid.

It was truly exciting to see the 3 debutants step up and impact the game in different ways. Newman's penetrating kicks were a thing of beauty, reminiscent of Malceski, but more impressive were his hands and movement in tight. Here's a player that spent the entire season last year in the NEAFL, didn't get a look in the senior team, was hands down the best player in the league, and first game he gets, bang. He's in to stay.

Overall, the three debutants played inspired football at times, executing skills that belied their youth, and truly excited the crowd and supporters alike. It's a good sign of what may yet to come from those players, given the pressure of the game. It's fantastic to see players like Hewett and Jones step up in the midfield when Hannebery and Parker were down, throwing themselves about and doing what they could. When the Dogs were all over them in the 2nd quarter, those two in particular stood up and executed.

But it wasn't all sun and rainbows, hand holding singing Kumbaya. Some of the senior players, the leaders of the club, were either down right awful, or just unfit. Some of them haven't played well since the start of JLT, either limited game time, or playing unfamiliar roles. Kieren Jack looked woefully underdone in both his senior games, and you've got a Sydney team depending far too heavily on far too few again. Different season, same old problems. Throw in the obligatory Tippett injury and you can throw a blanked over the last 4 years. One has to wonder if giving the captaincy to Kennedy has changed the way that he plays, and if the VC for Parker is weighing heavily on his mind. For me though, I just look at the cold, hard facts. The midfield three are just unfit, and its blindingly obvious. All three had knee injuries during the finals series and it limited their pre-season.

The good news is that with the inexperienced players performing so well, and the experienced players so far off the boil its stunning, there's plenty of room for improvement. There's a number of players yet to come into the side that'll provide a lot of cut and thrust that's missing. Heeney plays a vital role in the midfield, in a similar way that Goodes used to, as well as goal sneak Papley and key defender Rampe. When looking over the two teams that played, both sides had a lot of players missing from the grand final. The Swans were missing 8 players from that team (Heeney, Richards, McGlynn, McVeigh, Mitchell, Papley, Rampe, Rohan), a lot of experience, but a lot of good, goal kicking forwards too.

Hayward is one to keep an eye on, signing a 1 year extension before he played his first senior game, having been recruited just last year. That's impressive from the young forward and no doubt down to his hard work. It paid off, debuting on Friday and putting in a pretty good first half shift. He's another one of those fast type half-forward flank players that can play short and small, but has the body to fit into AFL football straight away.

Florent was an excitement machine in the first half, getting stuck in everywhere in the forward half of the ground. Even with his slight frame, he was in and under, grappling among the best and winning his own ball. Better yet, he snagged his first goal for the club, with an epic chase down tackle on the Dogs' primadonna, contract rebel, undeserving Norm Smith Medalist, Johannisen.

The players got around him, celebrating the goal, and what a fantastic one it was too. 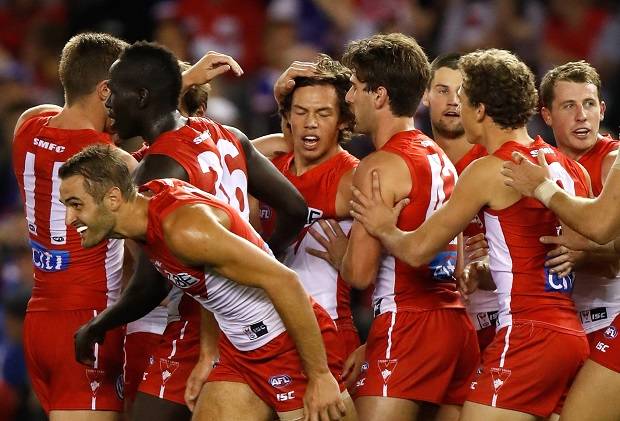 Nic Newman stepped up and slotted through his first goal in AFL football in the 2nd quarter, alongside Florent. It was a great moment for the young man and a deserved reward for an impressive first half performance.

Tippett looks to have escaped serious ankle damage. In this mornings press conference, Longmire said that he was unlikely to be available for this Friday nights game against Collingwood. That's fantastic news, since the guy is like Mr Glass from Unbreakable - he moves too fast, he breaks down. He falls down, does something huge. While he's been maligned during his time at the Swans, there's no doubting his important when he's fit and firing.

Captain Kennedy spoke to Sydney Swans on Saturday at Melbourne's fan day at Albert Park. He talked about the positives of the game, the fact that the Swans were in it to win it half-way through the last quarter and the performance of the young players. But he was disappointed with the performance of the senior players.

"We were in a position to win it, and they were too good in the end. We've got to get better, try to move forward and get a win next week", Kennedy said.

When asked about the Callum Mills deliberate rushed behind, he wasn't critical of the umpires decisions, diplomatically reflecting on the performance, critiquing the decisions of the players instead.

"I thought that if you were in 10, metres that was ok, but at the end of the day you can't do anything about it now.

"Best case scenario is if any decision like that didn't influence the result, we could have done a lot of things better to perhaps get the win.

"It's a hard one, it's a fine line, it's up to the umpires' interpretation. Sometimes they get it wrong, most of times they get it right, and generally over the course of the season it evens out.

"It's not something that we really worry about and we'll move on to next week and try to control the things that we can control."

He admitted that the Swans were off their best and that the core group of players, himself included, needed to lift.

"I think the core group of our players can go another level, me included," Kennedy said in Melbourne on Saturday.

"We'll look to do that and hopefully get back on the winning list."

Franklins' performance on Friday was a throw back to his absolute best. Barely kept chained in the first 3 quarters, he finally unleashed in a blistering 15 minute spell that almost blew the game wide open. He finished with 4 majors, 3 from outside 50m in the last quarter, arguably the Swans best player afield. There's no doubt that he loves the big stage and the final quarter was just another highlight in the impressive Buddy Franklin career, reeling off 3 massive bombs to put the Swans in front. He finished with 23 disposals, 11 marks and 4 goals, and almost won it single handedly for the Swans.

Longmire summed it up after the game.

"At the big times and big occasions he is a massive competitor," Longmire said of Franklin's performance.

"He had a real crack in that last quarter and I thought all of our boys lifted and responded.

"We needed to do that for 30 minutes and we couldn't do it for the last 10 minutes."

The AFL put it simply: "We don't deserve Franklin"

You just can't keep the man down.

Longmire: don't leave me hanging on the telephone

Reminiscent of Blondie's hit, Don't leave me hanging on the telephone, Longmire has picked up his phone, dialled AFL…

Finally, some good news from the weekend. Swans big man Kurt Tippett has avoided a serious ankle injury, having…