Update: Apologies for the confusion of timezones in the original article. It is 6.10pm AWST, 8.10pm AEST.

Both the Swans and the Eagles have announced their teams for the Thursday night clash, with both teams making two changes.

More importantly for the Swans, they'll have to do without important ruckman Sam Naismith, missing with a minor knee injury. While Tippett wasn't able to overcome his ankle injury in time, both players were given every chance to make themselves available, but ultimately remained in Sydney, and will miss the clash.

“Unfortunately, Kurt didn’t get up – we gave him every chance,” Longmire said.

“He did a little bit of training but being a Thursday game it made it a bit tough for him to get up.

“Unfortunately, Sam Naismith hurt his knee at training in the last training drill, we wanted to give him every chance too, but unfortunately he hasn’t come up either so those two boys will miss this week and we’ll see how they go next week.”

While young ruckman Darcy Cameron wasn't available for selection, having injured his shoulder in the last NEAFL game, Longmire said he's got confidence in Callum Sinclair to handle the workload.

“We got him for the reason to be able to come in and play really good, strong hard footy for four quarters and he’s got a big task ahead of him but he’s not the only one,” Longmire said.

“There’s plenty of others who have jobs ahead of them and I’m sure he’ll get a hand from a few of the boys.

“They’re looking forward to the challenge of taking on the Eagles here with a strong midfield.”

That's a pretty big rap and hopefully he can deliver.

Jordan Dawson was omitted after his first game senior AFL game. While he looked capable and had good moments throughout the game, he'll greatly benefit from the match and will no doubt vastly improve in the reserves.

The two players coming in for the Swans, are small forward Tom Papley, having recovered from knee surgery in the pre-season, and maligned midfielder Harry Cunningham. While Tom Papley has been sorely missed, Cunningham will be playing his 2nd game of the season.

Newly upgraded rookie list player Lewis Melican, will be joined by Jordan Dawson and Brandon Jack as the emergencies.

“It’s good to have him back in, he gives us great energy, he’s an important goal kicker for us,” Longmire told Centrum Team Selection.

“Tom’s ability to play as that small, crumbing forward in our front half has been really missed over the last few weeks so it’s good to have him back in and hopefully he’s really lively in our front half.”

The Eagles have once again omitted former Swan forward, Lewis Jetta. It's fair to say, that he hasn't been a hit since moving back home. Always in and out of the side, you have to wonder if this might be one too many times omitted.

He's joined by Mark Hutchings on the sidelines, while Duggan and Butler come in. 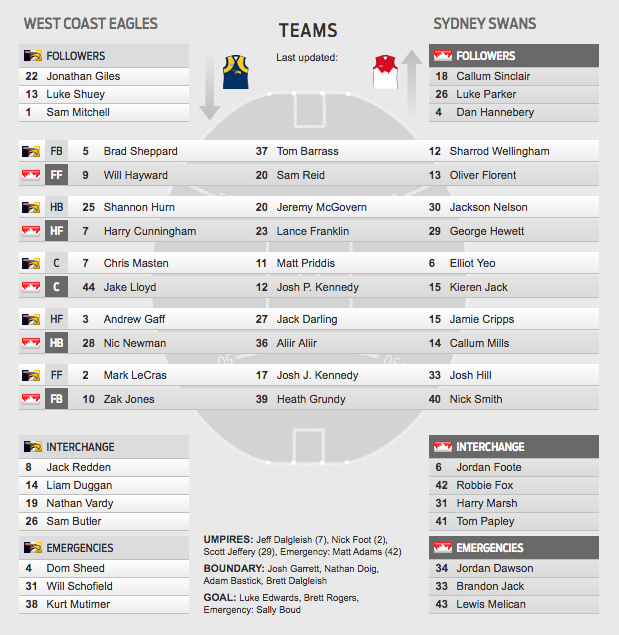 Morning all, it's game day as we take on the Eagles in Perth tonight. The game kicks of 6.…

Swans ruckman Callum Sinclair could be forced to ruck solo against the Eagles on Thursday night, after Tippett and…