The Swans will welcome back three of its biggest names, including milestone man Dane Rampe, set to play his 100th game, for their crucial clash against the Saints on Saturday afternoon at Etihad stadium.

Rampe, having fully trained the last two weeks with enough conditioning under his belt, Longmire had no hesitation recalling him to the senior side.

“He’s been able to do all the competitive work, he did a lot of it today and pulled up really well so he’s ready to go,” Longmire said with a hint of a smile in this week’s Centrum Team Selection.

“We’re really pleased to get him back in as he’s such an important player for us.”

Rampe, who is playing his 2nd game of the season and his 100th for the club, is among three inclusions. Sam Naismith (knee), Jarrad McVeigh (hamstring) and Harry Marsh (omit) make way for the returning players.

Both Naismith's and McVeigh's omissions were forced, with McVeigh battling through the match on Sunday with hamstring tightness and Naismith copping a knock at the end of the third quarter.

Despite his hand being forced, Longmire has the luxury of recalling Tippett who's coming off a strong performance in the NEAFL, kicking four goals and helping himself to 22 possessions and 6 marks in the reserves 121 point win.

Gary Rohan similarly feasted on Canberra, kicking 4 goals and collecting 19 disposals and was among the best on field.

“They played well in the reserves last weekend, we had a couple of others that played well…so that’s a good sign,” Longmire added.

“Gary and Kurt come back in. They’ll be important for us in the roles we want them to play.” 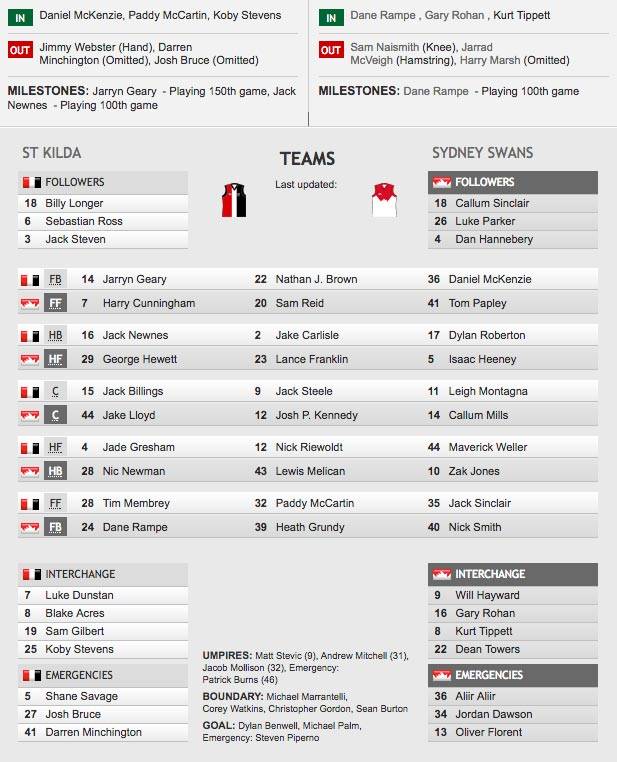 Just like the famous line from Frankenstein, The Swans Blog's very own "Frankenstein" is alive. https://twitter.com/theswansblog/…

Longmire fronts the press ahead of training