Through solid form in the NEAFL, Oliver Florent has earned himself a recall to the senior team head of Sydney's blockbuster Marn Grook clash against Hawthorn on Friday night.

The 18-year-old draftee has struggled to establish himself as a regular senior player, having debuted in the first game of the season and played five games in total.

Florent finds himself back into the senior side, after a solid hit out against Sydney University, collecting 30 disposals in a wet and soggy night at Henson Park.

He was a late omission for the North Melbourne game a fortnight ago, with the coaches preferring to manage to emerging talent's workload, and Oliver responded in the best way possible, forcing the Match Committee to take notice.

Speaking on Centrum Team Selection, coach John Longmire said that the more exposure Florent had to AFL football, especially against a class side like Hawthorn, the better off he would be.

“We think that he can keep on improving and get him working on his game…more exposure to senior level the better.

“He comes in after a really strong performance in the reserves.”

While Kieren Jack, a previous Marn Grook best afield winner, was certainly in the selection frame having recovered from his hip injury, Longmire decided to err on the side of caution and give his former captain a solid block of training before bringing him back into the side.

“He did a fair bit of training and has pulled up well but we just thought he’s maybe not quite right for a game just yet.

“We want to put more strength work into him over the next week or two before he’s right for the next game.

“He should be right for the game after the bye.” 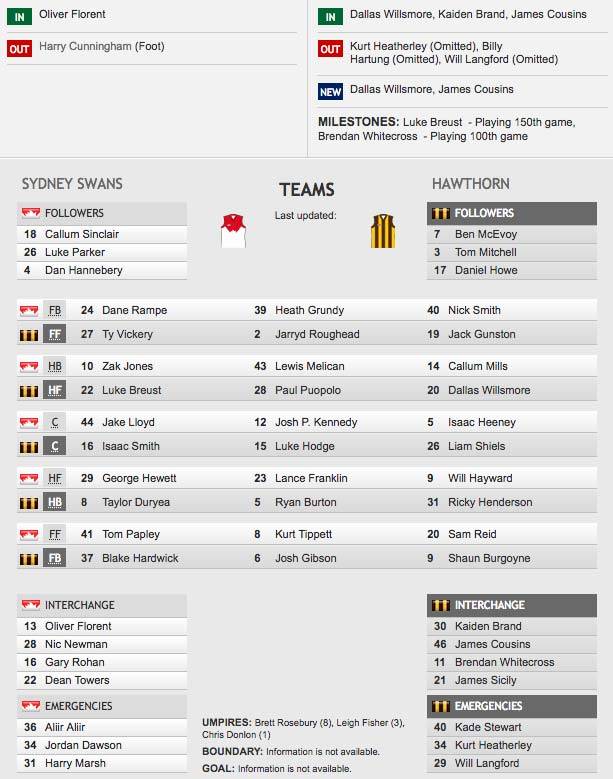 A beer a day keeps the naysayers at bay - Hannebery

Dan Hannebery's form over the last month has dramatically improved, with some in the media casually linking his improving…

Mills: We can't get complacent, on RSN