To the tune of ACDC's Back in Black, former captain Kieren Jack is back in the side to face reigning premiers, the Western Bulldogs, on Thursday night at the SCG.

Having successfully recovered from a persistent hip injury that restricted his pre-season, and ultimately disrupted the first half of the season, he's back in to play an integral part in the Swans tilt at the finals.

The 29-year-old played the first five games of the season and averaged just 15.8 disposals per game, with the 2010 Bob Skilton medalist derided by many in the media, and basically written off as a footballer.

After a solid block of training, he's back in the side to for the blockbuster clash, and with his 215 games experience in the AFL, only one of six Swans named in the side with more than 170 games experience, will no doubt be a crucial inclusion as the Swans look to turn their season around.

"We played him in the first month on the basis that we had a really young team," Longmire said of Jack on Centrum Team Selection.

"He had very little preparation (so) in hindsight we probably wouldn't have done it but at that particular point in time that's what we needed.

"He's had a much better preparation this time around so we're confident he'll be able to contribute to the team."

Where there's good news for one former captain, there's bad news for another, with veteran Swans Jarrad McVeigh struck down by another soft tissue injury, whose absence is to be extended by another two weeks.

Kurt Tippett, who makes way for Sam Naismith, will play his second game in the NEAFL reserves this season, with the 205cm, 102kg ruckman looking to discover some form.

Even though he booted four goals, had 34 hit outs and collected 23 disposals in his last NEAFL hit out, he has failed to fire since he return to the senior side.

Florent has been named as one of three emergencies alongside Aliir Aliir and Harry Marsh. 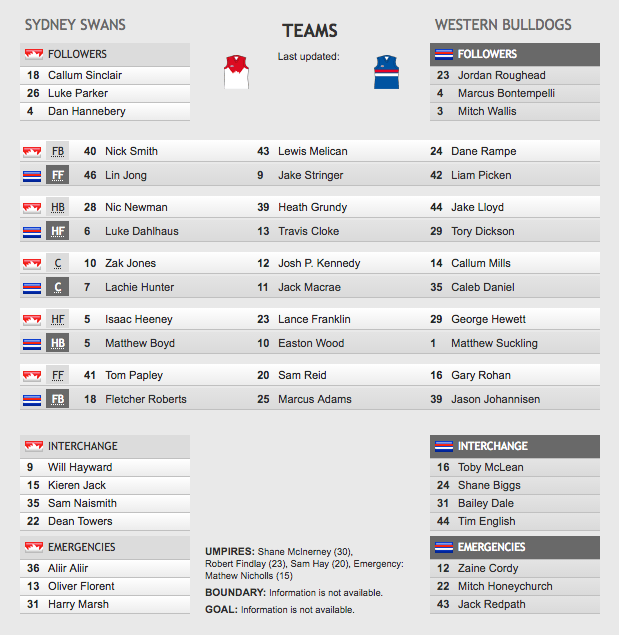 Sydney Swans Football Manager Tom Harley has all but ended speculation about Jones's future today, after announcing the the…