The Swans have announced two changes to the team that beat Richmond last Saturday afternoon, turning to youth instead of experience.

The Swans have called upon Lewis Melican and Oliver Florent in place of Harry Marsh (omitted) and Zak Jones (suspended), the latter rubbed out for a week for striking Butler on Saturday afternoon.

Melican's omission last week before the trip to Melbourne was down to match-ups with Richmond's mosquito forward line, but with Essendon playing tall and Aliir missing through injury, Melican has earned an immediate recall.

Longmire said that Melican was unlucky to miss out on the Richmond game, but should slot back into his position nicely.

"We looked at Essendon's team and they've got some genuine talls, 196cm-plus," Longmire said in Centrum Team Selection.

"We had a number of blokes we thought could have been selected in that defensive post that have been in good form but we felt with Lewis (going) out last week with match-ups, he can come back in with match-ups. We just think he's best suited."

As a reward for his improving NEAFL performances, Oliver Florent has been recalled to the senior team, set to play his 7th senior game on Friday night.

"He gives us some real speed, some consistent high-speed efforts throughout the game," Longmire added.

"He's really developing well. His performances at the next level down have been absolutely consistent and at a really high level.

"He played well again last week in that win and half-forward role."

Two notable absentees from the lineup are the recently fit again McVeigh and Aliir Aliir.

McVeigh will make his return to senior football through the NEAFL, starting Saturday making it his first game at that level for more than a decade, after Longmire believed the defender would be better off for the hit out.

Aliir, who suffered a minor knee injury in last Saturday's 102 point win against Aspley, hasn't recovered in time to be considered for selection. 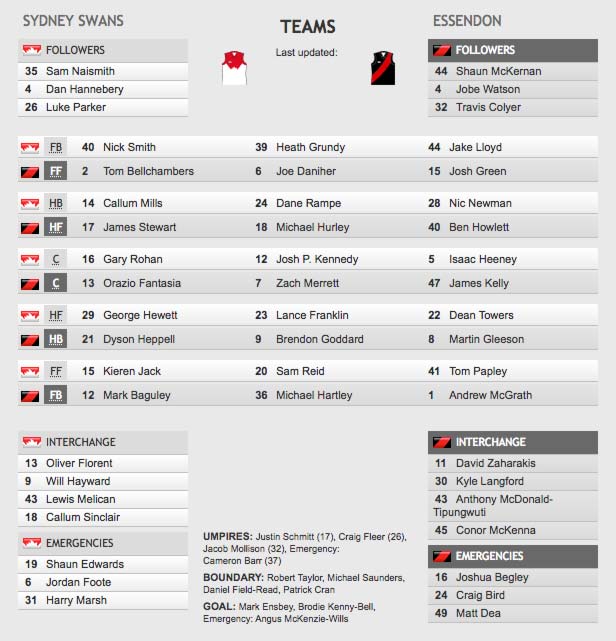 Match report: Rohan keeps the Swans in the hunt for September action

Three minutes left, I started writing this match report. I started with scathing criticism, but as the final seconds…

The Sydney Swans are set to welcome back veteran midfielder and former captain Jarrad McVeigh this week, after overcoming…