The Swans have rang the changes ahead of the Cats game on Friday, with captain Josh Kennedy missing through a thigh injury, but regaining big men Sam Reid and Kurt Tippett.

Kennedy, who was hampered by hamstring tightness last Friday night against the Hawks on the MCG, failed to recover in time to take his place against the Cats.

It's fantastic to see Kurt Tippett make his long awaited return to the senior team, his first game since the round 10 loss to the Hawks.

Coach John Longmire said while it was disappointing to lose Kennedy, he's confident the additions will fill the gap.

"It's good to have Sam (Reid) back in the team, he has got that versatility in his game ... and Kurt, obviously with Naismith going out of the team, means there's another marking target in our forward half," Longmire said.

"(Lloyd) is a very important player for us, he's had a consistent year this season, he's been really good since the opening round and has held his form throughout that whole time, so it was important to get him back in."

Jake Lloyd (hip) and Gary Rohan (back) were late withdrawals last Friday night after traveling with the team, with Gary Rohan suffering back spasms during the warm-up.

Dan Robinson, Jordan Foote and Aliir Aliir have once again been named as emergencies. 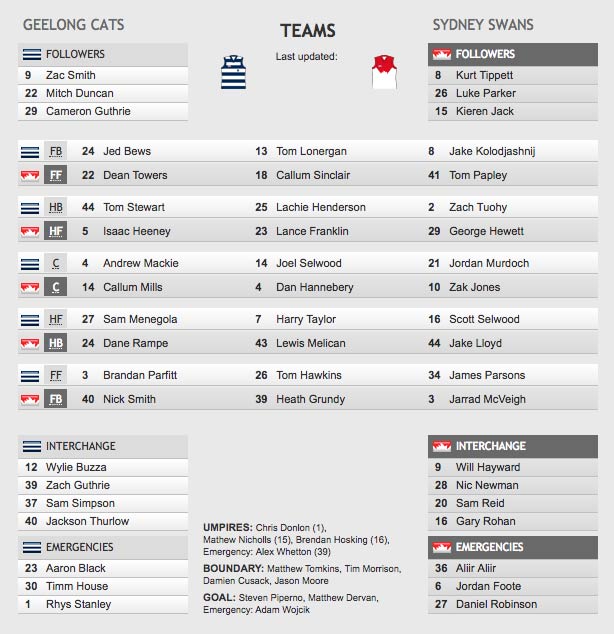 Good morning all, game day is finally here, and it's a chance for the Swans to seek immediate redemption…

Proud Swan speaks to the media after inking new contract

Zak Jones today spoke to the media, fresh after signing on for two more years with the Swans. The…