For the third time this season, the Swans have announced an unchanged line up, with Sam Naismith ruled out early in the day, and captain Josh Kennedy failing to prove his fitness during the main session.

Cursed as the Swans are with unchanged lineups, they're risking the ire of the football gods, with more than a years' worth of football since the Swans actually played the same team in consecutive weeks, with late changes twice plaguing the Swans this season.

While the build-up for Kennedy's return was significant, with players after the Geelong victory speaking about how Josh had trained Friday and felt OK, he ultimately failed to train with the main group, and ended his chances of a recall.

He misses his 3rd game of the season, and just his sixth since he became a Swan, proving a mainstay of the team ever since his red and white debut.

While he showed no signs of discomfort, [coach John Longmire said that he'd rather err on the side of caution] with his captain.

“Obviously, a player we would have liked to have come back into the side is Josh Kennedy, but he just didn’t quite get up,” Longmire said.

“We expect him to play next week. He ran almost at full pace but didn’t quite get there. We didn’t want to keep pushing him.

“He didn’t feel it, it felt really good, but we sat down with the medical staff and Josh himself and thought whilst we’re desperate to get him back into the team as quick as we can, the risk was too great.”

Kennedy dominated the last clash between the two teams, picking up 3 Brownlow votes and 45 disposals in their 90-point victory at Domain Stadium.

His absence means a heavier reliance on Luke Parker and Dan Hannebery to shoulder the bulk of the clearance work, against the likes of Nat Fyfe and Lachie Neale.

“It was really important to share the load, across all of our players, we’ve bought on some young midfielders this year, and over the last few years, and they’re getting more exposure (to senior football),” Longmire added.

“They’ll get a big challenge this week as Fremantle’s midfield is experienced, full of quality and really hard, a good mix of inside and outside players, so we’ll have a real challenge ahead of us but we’re looking forward to it.” 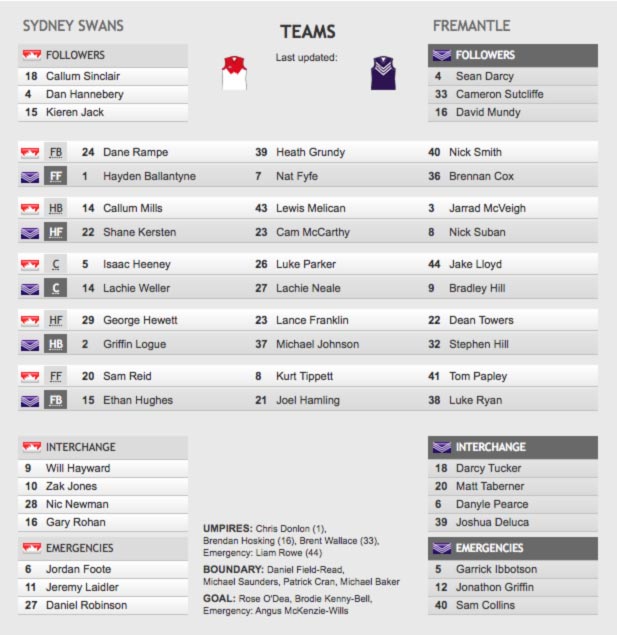