The Swans have made two changes for their final match of the 2017 home and away season, the twilight clash against Carlton on Saturday evening.

Dan Hannebery (hip) and Tom Papley (knee) have been withdrawn from the team, replaced by fit-again Harry Cunningham and Nic Newman.

Hannebery had been battling a hip complaint for the last three weeks, while Tom jarred his knee against the Crows last Friday night.

With the last round of the AFL season followed by a bye, it provides a well-time rest for the sore stars, and gives them ample time to recover for the finals.

Both failed to train during the week, making it an easy choice for the selection panel, to bring Nic and Harry back into the team in their place.

Newman returns for his first game since Fremantle, having been omitted from the Crows game, despite training well.

Utility Harry Cunningham will play his first AFL game since fracturing his LisFranc ligament in round 9.

Speaking to Centrum Team Selection, John Longmire said that it's better to deal with injuries now, than carry them into the finals series.

“Unfortunately, Tom landed heavily on his knee, jarred it up a little bit, and hasn’t been able to train this week at all,” he said.

“Dan Hannebery, (it) was touch-and-go whether he’d play last week. He’s had a sore hip for a few weeks and it got the point where he couldn’t train either.

“Unfortunately, both players are out. If they were fit, they would have played, but they’re not, and we obviously want them for the coming weeks.”

Ever reliable Hannebery will miss for the first since since his 6-week layoff in 2014 for an ankle injury.

Newman and Cunningham's inclusion reflects on the depth of the squad leading into the finals, with many more players waiting in the wings, eager to prove their value.

“Newy (Newman) was going well before he went out of the team, so we’re really confident he’ll come back in and contribute,” Longmire added.

“Cunningham, for the first part of the year, was really important for us. His speed and smarts, either forward or through the midfield, is really valuable.” 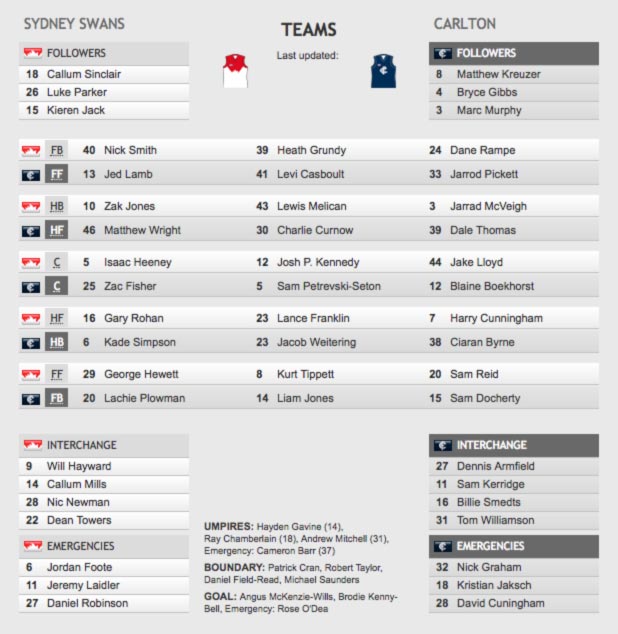 Good morning all, game day is finally here and its time for the Swans to not only seek revenge,…

Good morning all, it's a fine sunny morning here in Melbourne, and with it brings a new day of…