Saturday night at the SCG saw another fierce instalment of the brewing cross-town rivalry between the two Sydney-based teams. The Swans sought redemption for their poor second half performance against Port Adelaide the week before, while the Giants were out to prove that they’re the real deal in 2018, a force to be reckoned with.

The Swans received a significant boost pre-match with Sam Reid named to play his first game of the season. For the Giants, Toby Greene’s omission rubbed salt into an already fresh wound off the back of Tom Scully’s broken ankle. 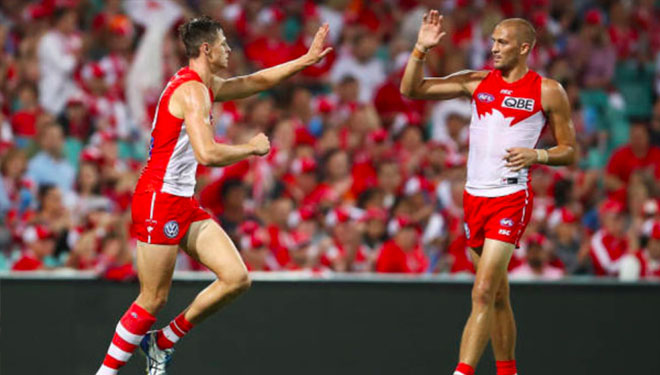 RUCKS
Callum Sinclair; wow what a game, what a performance, and what a way to silence your critics. For those that read my column, you would know that I’m a fan of Sinclair’s. I’ve backed him in this season, to stand-up and prove that he can be a big game player. He hasn’t let me down.

He was superb on Saturday night with another dominant ruck performance, racking up 45 hit outs along with 14 disposals – 11 of them contested, 6 clearances and 3 goals. Sinclair regularly snuck forward and provided a real target in the forward 50 alongside Reid, capitalising on the scoreboard.

It was a battle of the rucks as the game wore on. Lobb was hobbled by injury for the second half, with Patton admirably filling in. Both Sinclair and Patton were the best rated players for their teams, but it was Sinclair that had the most impact.

Next week, Sinclair will be up against young pup Tim English. Look for Callum to dominate in the ruck, in the air and on the scoreboard. There’s a good chance that he will back up his Giants performance with another dominant display.

BACKLINE
Fresh off a disappointing display against the Power, the Sydney defence would have wanted nothing more than to put that performance behind them and subdue the Giants forwards. With the likes of Cameron (1.96m), Patton (1.97m) and Himmelberg (1.94m), the defenders were set a tough task, giving away a lot of height advantage.

The difference between the defensive efforts between rounds two and three couldn’t be more black and white. While they struggled against Port Adelaide and made a high number of uncharacteristic mistakes, they were clean and efficient against the Giants. Perhaps it says more about forward line pressure or the way the Giants moved the ball, compared to Port.

Callum Mills was deservedly won the Brett Kirk Medal and was the star of the Swans’ resolute defence. He finished with 26 disposals (80% DE), 8 rebound fifties and 510 metres gained. He drove the ball out of the backline and was instrumental in setting up the Swans’ offensive efforts.

It was impressive to see the defenders bounce back from last week and not play two poor games in a row. Next round the Swans face a smaller and quicker forward line and will need to adjust again. 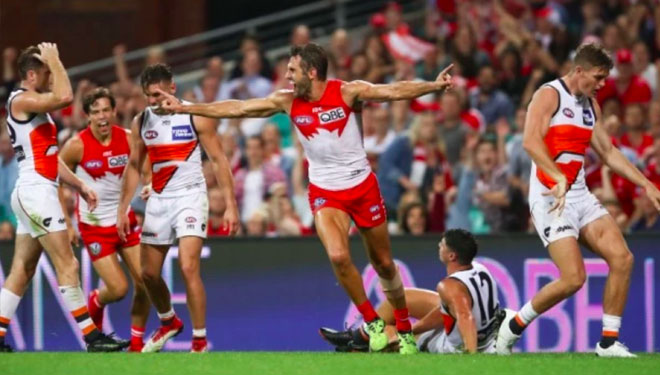 MIDFIELD
The midfield put in a solid performance, however was probably beaten on the day by the Giants engine room of Kelly, Shiel and Coniglio. The Swans lost the clearance count 33-to-47, and the giants midfield looked much more threatening at times.

Heeney and Kennedy were the stand out contributors this week, picking up 48 disposals (27 contested) between them, recorded 40 pressure acts and kicked two goals. Captain Josh Kennedy had eight clearances, while Heeney finished with four.

The development of Isaac Heeney in the midfield is a marvellous sight to behold. His ability to crack in and win the ball at the coalface, spread from stoppages and use the ball on the outside is incredible. Isaac’s game has the perfect balance of inside-to-outside play, and what is more incredible is that he is only going to improve. 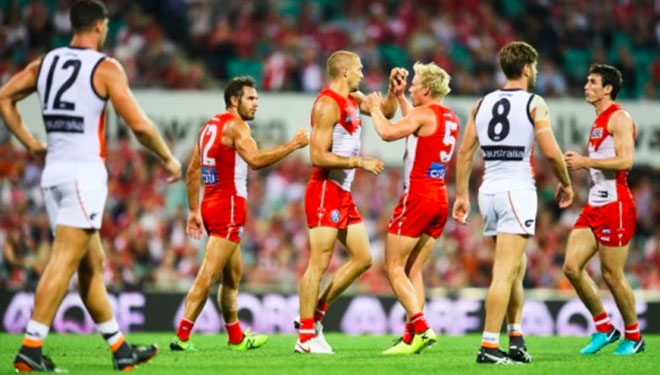 FORWARDS
Sam Reid returned to the side and played like he had never missed a beat. Although fleeting in and out of the match, his importance to the side is underrated. The structure and performance of the forward line is significantly more improved when he’s in the team and positioned deep in attack.

Sadly, despite his good two-goal performance, he left the field late in the game with a quadriceps tendon injury that will keep him out until the bye. It’s unlikely that we’ll see a similar forward line structure until he returns, with the only options being untried players Cameron, Amartey and McCartin.

16 goals, 9 individual goal scorers, with 5 of those players being midfielders. This is the type of forward line performance Swans fans dream of. If that wasn’t enough, enter Buddy Franklin late in the fourth quarter, with a dusty martin like fend off on Nick Haynes, and then a long bomb from 65 to kick the sealing goal. The man is a freak!

Anthony Hudson said it best in 2014, “GIVE HIM A LONGER CONTRACT!” Franklin finished the match with 2 clutch last quarter goals, 22 disposals, 9 inside fifties and game-high 9 score involvements. Will Hayward had a fantastic game, and he just keeps on exciting us. He finished with 18 disposals (83%DE), 9 marks, 2 goals and a ton of forward pressure with 14 pressure acts.

George Hewett showed us why the coaches and players love him, and why he finished top 5 in the 2017 Bob Skilton Medal. His selfless defensive role on Lachie Whitfield, although may have gone unnoticed by some, helped negate the run and carry out of the backline. Whitfield was held to just 15 disposals and more importantly only 130 meters gained. This is well down on his season average of 30 disposals and 470 meters gained. 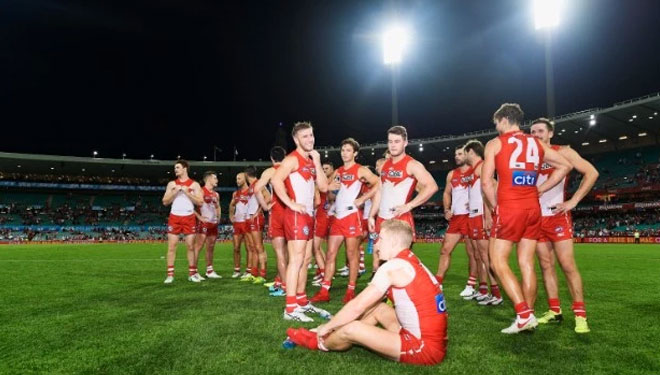 IMPRESSION
A great team performance from the Swans, comfortably beating one of the early premiership favourites. It was great to see the backline bounce back from last week’s down performance, as well as a more even spread of goal kickers, as the Swans try to break their dependency on Franklin.

Next round, the Swans take on the Dogs at Eithad stadium, a venue the Swans hold an imposing record at having won 13 of their last 15 matches. Although the Dogs are coming off a win, I believe our midfield will overwork and outrun the likes of McLean, Bontempelli and Dahlhaus, and set us up for a comfortable win. My prediction is 6 goals coming from the midfield and 10+ individual goal kickers as we dish out some payback from that dark October day in 2016.

SwansCast Episode 22: I'm going to drop him like a bad habit

Good morning all, it's hump day today and despite the win against the Giants on the weekend, it hasn't…