The Swans return to Etihad Stadium for the first time since Round 9 last year, taking on the 2016 premiers the Western Bulldogs on Saturday afternoon.

The last time these teams met at Etihad was in Round 2 last season, when the Bulldogs unfurled their 2016 AFL premiership flag and celebrated with a 23-point win over the Swans.

Since then, the fortunes between the teams couldn’t be more different. The Bulldogs are seemingly in free-fall, having won just one of their last six games, the last two losses by an average of 66 points.

The Swans on the other hand are one of the early season flag favourites, having outperformed Lazarus with their 2017 season resurrection and continued their form into season 2018.

They’ve played three flag contenders in the first three rounds of the season, beating two, while the Dogs have played the Eagles, Giants and Bombers, losing to both contenders.

A solid win against Essendon in round 3 has silenced some of their critics, but now they face a sterner challenge when they face premiership contenders, the Sydney Swans.

While the venue should benefit the Bulldogs given its their home ground, the Swans hold a better win-loss record at Etihad Stadium in recent years, having won 13 or their last 15 matches, while the Dogs have won 8 of their last 15.

Both teams have significant injury concerns. Zaine Cordy is the latest player to miss for the Bulldogs, rubbed out through suspension, while Swans Lewis Melican and Sam Reid miss through injury, and Gary Rohan has stayed behind in Sydney.

Aaron Naughton will have his hands full against the in-form premier forward of the competition, Lance Franklin, who has kicked 14 goals in the first three games and is currently ranked the No. 1 player in the competition for season 2018 by AFL Player Rankings.

Callum Sinclair has lifted to another level in the absence of Kurt Tippett and Sam Naismith and has been impressive in all three games, averaging 35 hit-outs and winning plaudits for his 3-goal performance against the Giants in Round 2.

KEY MATCHUPS:
Lance Franklin vs the entire Western Bulldogs defence
The Swans will have to make do without forward Sam Reid, but have recalled Aliir Aliir in his, Rohan’s and Melican’s absence. Easton Wood is the most experienced player, but with Dale Morris side-lined and their tallest player a 33-gamer, it’s going to be a tough task for the inexperienced Bulldogs defence.

Callum Sinclair vs Tim English
Sinclair is in fine form in season 2018, the second highest dream team rated player for the Swans and was best-on-ground in the Swans win over the Giants in Round 3. He’s won 40+ hit outs for two rounds running and hit the scoreboard with three goals last week. Bulldog Tim English stands 5 cm taller than Sinclair but has played just 5 games and averages less than 10 hit-outs per game.

George Hewett vs Jason Johannisen
The last time these teams met, Hewett tagged Johannisen out of the game. He roughed him up behind play and the Bulldogs didn’t adjust to the Swans’ tactics. Jason is still one of their primary ball movers out of defence, so it’s incumbent on the Swans to stop him once again.

Isaac Heeney vs Marcus Bontompelli
The two midfielders will go head-to-head once again in a battle for midfield dominance. While Parker and Hannebery are the obvious options, Heeney ran with Bontompelli in Round 12 last season and dominated. Bontmopelli will win plenty of ball in the contests, but it’s up to the Swans to reduce his influence once he has it.

THE SIX POINTS:
1: The last time these two teams met, the Swans targeted Johannisen and Bontompelli and it worked brilliantly. The Dogs struggled to move the ball out of defence while Heeney tackled Bontompelli into oblivion and starred with 31 disposals.

2: While the Bulldogs have defeated the Swans four of the last five times they’ve met, they’ve played four times previously at Etihad Stadium with the Swans leading the head-to-head, three wins to one.

4: Despite early season form issues for the Bulldogs, they are the number one ranked side after three games for marks inside 50 with 53, averaging 17.7 per game, while the Swans average 10.3 per game.

5: Swans superstar forward Lance Franklin sits at a career-high AFL Player Ratings ranking of 4 and is ranked the No. 1 player in the AFL for season 2018, while Marcus Bontompelli is the highest ranked Bulldog at No. 10

IT'S A BIG WEEK FOR...
Lance Franklin
The Swans fixed their forward line issues last week with the inclusion of Sam Reid but will now be without him until the mid-season bye, while missing Rohan as well. Franklin will be left to compete one-out against an injury-riddled defence lead by Easton Wood. 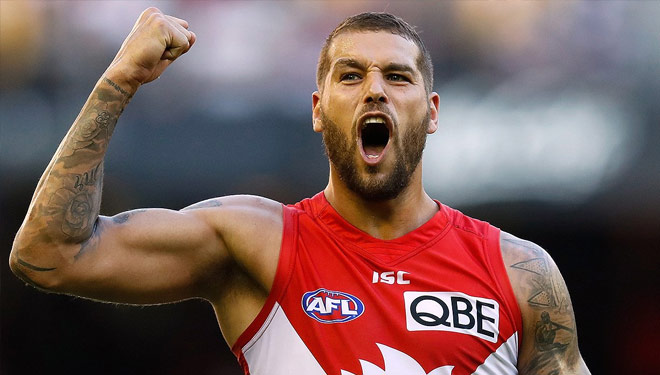 The Swans out-lasted the Bulldogs on Saturday night in the Swans’ first heart-stopping win of the season. Despite a…