The Sydney Swans return to Friday night football at the SCG for the first time this season, welcoming last years’ grand finalists, the Adelaide Crows.

There is little doubt the Crows will be itching to kick things off against the Swans, given their shock loss at home to the Pies last weekend, but with an ever-growing injury list, including Rory Sloane, it is going to be an uphill battle to get a result.

Crows defender Daniel Talia is set to resume his long-running battle with Swans superstar forward Lance Franklin, but if his midfielders do not improve their work-rate, he could be in for a tough night.

The Swans have their own injury concerns with tall forward Sam Reid missing through injury, but welcome back speedster Gary Rohan, and have plenty of contributors through the forward line.

The Crows forward line is far different from their grand final line-up, with Jenkins well down on form, Walker short of fitness, Eddie Betts missing through injury and Charlie Cameron traded in the off-season.

For the Crows to kick a winning score, Tex Walker and Josh Jenkins will need to find some form against the Swans miserly defence and fire-up, with Betts and Fogarty missing from the side.

If ruckman Sam Jacobs can give his midfield first use of the ball, there is a chance at least that his side can get enough scoring opportunities, with Gibbs, Laird and Seedsman in excellent form.

KEY MATCHUPS:
Lance Franklin vs Daniel Talia
The last time these teams played, Franklin booted two goals in the first quarter on 5-gamer Keath and led Daniel Talia on a lung-busting sprint down the wing for one of the goals of the year. The Crows stopper will have to be at his absolute best to stop the Coleman medal favourite from kicking another bag.

Dane Rampe vs Tex Walker
Always an entertaining and engrossing battle, Rampe has often had the better of Walker and it was no different in round 22 last season, limiting Walker to just 1 goal. Rampe is at his best one-on-one, but his intercept play is elite, and it is something the Crows must be mindful of.

Callum Sinclair vs Sam Jacobs
Sam Jacobs is one of the best ruckman in the competition and his form line gives the Crows hope for a result on Friday. The last time they played, he dominated Sinclair and was one of the better players on the ground.

Luke Parker vs Bryce Gibbs
Gibbs has been one of the few shining lights for the Crows this season and will need to be at his best again on Friday night, with both Crouch brothers and Sloane missing. Parker has been in terrific form in the first four rounds, booting 6 goals and averaging over 24 disposals a match.

THE SIX POINTS:
1: The last time these two teams met, Josh Kennedy was the star for the Swans, picking up 31 disposals and 3 Brownlow votes, but it was Lance Franklin, Gary Rohan and Tom Papley that were the difference in the end.

2: Sydney have dominated the head-to-head’s recently, winning 6 of the last 7 matches. The Crows haven’t won at the SCG since 2012, a 5-point victory in round 6.

4: Lance Franklin leads the competition for goals with 17, while Walker and Jenkins have kicked 9 and 8 respectively; the Swans have kicked 57 goals for the season to Adelaide’s 54.

IT'S A BIG WEEK FOR...
Harry Marsh
Swans defender Harry Marsh has forced his way back into the team at the expense of Aliir Aliir, taking full advantage of Melican’s injury. With Fogarty out, it falls to him to put the brakes on Adelaide’s athletic forward Tom Lynch. 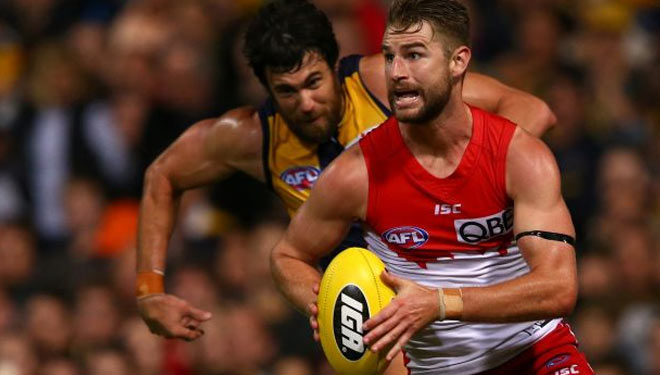 The Swans were left to rue a dreadful first half in their round 5, 10-point loss to the Crows…