After weeks, nay months, seasons even, of criticism for lacking a mythical ‘plan b’, for when things go wrong, the Sydney Swans smashed the Cats in the last quarter on Saturday afternoon.

They booted seven-goals-to-one in the last stanza, storming home and in the process, over-turning a 22-point deficit. They became the first team since West Coast in round 10, 2006, to beat the Cats at home when trailing at half-time.

No matter the win, ‘plan b’ still gets its run time. Even the AFL site had a dig at Longmire before the match, asking him what his ‘plan b’ is. 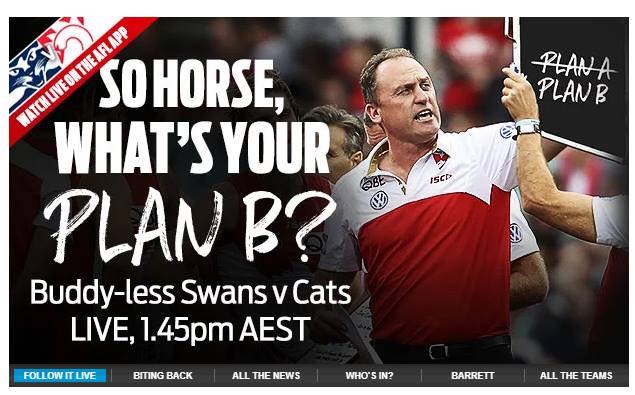 The Swans, as good as forced to go small against the Cats, dominated the first and last quarters. Had it not been for a bit of bad luck and some shonky home-team umpiring, they could have been up by four goals early in the second quarter. They probably should have been, if they had been able to convert their chances in the first quarter, kicking 4.6 (30).

Sinclair smashed Stanley in the first quarter, picking up a game-high nine disposals and looked unstoppable. The only time the Cats troubled the Swans was when Sinclair had a breather or went off the ground with a cut to the face. The Cats worked their way back into the game in the second quarter, on the back off Stanley’s resurgence against Fox and Sinclair.

The Cats played most of the second quarter in their forward half, barely troubling the scorers. It wasn’t until the last six minutes of the quarter when they finally got on top, Hawkins converting a set shot and Kelly getting one out the back.

Kennedy and Longmire after the game admitted that the Swans went away from what worked for them in the first quarter, with their pressure and intensity way off.

The Cats kicked an early goal in the third quarter, and it looked like the Swans were as good as done. Fair enough too, the Cats swarmed, and the Swans had little answer.

Kennedy and Ronke spoke after the game about what was spoken at the half-time break. Nothing major, no throwing names in the air and seeing where they land – just getting back to basics, win the hard balls, stem the flow.

Heeney and Hayward combined for a fluke goal, but still trailed with three-goals-to-one for the quarter, the Cats extending their lead to 22-points at the final break. Kennedy was having a good, but not great game, Sinclair had dropped off since his first quarter, and Parker wasn’t having much of an impact forward, kicking a set shot into the man on the mark in the second quarter.

Ronke and Jack cracked in to Tuohy after the third quarter siren, starting a melee and lighting a fire under the Swans backsides. They responded; the Cats had the first clearance, but from then on, the Swans dominated and smashed them in clearances, 16-5.

Kennedy stamped his authority on the game, tearing it away from the Cats midfielders, winning it off his own boot. It was an all-time great final quarter performance, one of the best you’ll ever see.

He silenced his critics and reminded everyone that he is still the best hard-ball winner in the league. Sinclair stood-up and grabbed the ruck dual by the throat, comprehensively destroying Stanley in the ruck. He racked up 39 hit-outs for the match, took three towering marks in the last quarter, and was influential whenever he was near the ball.

The Cats couldn’t stop him, or the Swans, when they got their roll on, and the Swans simply steamrolled them in the end. Fox’s spectacular pack mark at the start of the fourth quarter kick-started the comeback, with Hayward, Florent and Ronke firmly attached at the hip.

Longmire cops more criticism from his own supporter base, despite a 70% win rate. He coached the Swans to a premiership, and three grand finals in his eight seasons at the club.

‘Plan B’ has often been the sledgehammer to deliver the criticism, but what is it? No one can really describe it, citing Reid being swung back into defence, being out-coached, too faithful to his players, playing those that aren’t fit, or simply not adjusting fast enough, or at all.

This isn't something that's a Sydney phenomenon, it happens to every team, every coach.

The Swans won 15 from 18 matches last year, after dropping the first six games. It was a shocking start to the season, their worst since 1993, but they recovered and went on a ridiculous run of games and wins, that gave the Swans the unlikeliest chance of finishing top four. It was there for the taking, but Richmond was too good for too long, and Port Adelaide thumped the teams low on the ladder.

Plan b has often been a way to excuse players’ poor performances, bad skills, or the team reverting to the old ‘dump kick’ inside 50, even when the Swans can’t mark it.

The dependence on Franklin to kick every goal, or be involved in every play, is clear to see, but the criticism he receives when he doesn’t torch every single game is absurd, from the supporters and AFL community alike. Tippett was as fragile as glass in his last 18 months, but he proved in 2013 that he was one of the best full forwards in the game. He was an astute pick up, but injuries seriously affected his time at the Swans.

Gary Rohan and Sam Reid have dealt with constant niggling injuries. Reid’s played 121 games in his nine season, with three of those seriously affected by injury, while Rohan has struggled for continuity and form since his horrific leg break in 2012, just now coming up to 100 games after nine years in the system. It seems long ago since his break-out game against the Cats at Kardinia Park in 2011, booting a goal on the run.

Plan b is often applied as an easy excuse, a cop out, a way of blaming a result when blame doesn’t need to be apportioned, or even dealt out.

The players know when they’re having a shocker, and occasionally cop a bake. Florent won the game against the Bulldogs with his last quarter goal on the run but didn’t shy away from admitting that Longmire roasted them at half-time.

Parker was the first to come out after the disappointing loss to the Crows and admit that the entire team was well down in the first-half and perhaps deserved to lose.

There’s only so much a coach can do. Sometimes Longmire can be tardy, sometimes he makes mistakes, and sometimes the team selection doesn’t work. But when it does, when the Swans turn up and play, they’re the best team in the league.

Perhaps the Swans aren't consistent enough, ruthless enough, or don’t score enough for everyone's satisfaction, but when you’ve got an injury list a mile long, and a reasonably inexperienced list, starting the season 4-2 with wins against serious premiership contenders is damn good.

I’d take that any season, even when we drop the ball at home against quality teams.