After a two-week hiatus, the Stats File is back! I’m not sure how you all survived the past two weeks without your regular stat fix, however worry no more!

What a week to return to action, with the Swans showing their true blood grit to claw their way to a win on Geelong’s home turf.

In the lead up the contest, all the talk was centred around the buddy-less Sydney Swans having no chance against the hometown favourites.

As a Swans fan, this is when you sit back and laugh at all the doubters, don’t they know that we play our best footy with our backs against the wall.

Beware of the injured swan, it regularly bites critics where the sun doesn’t shine! 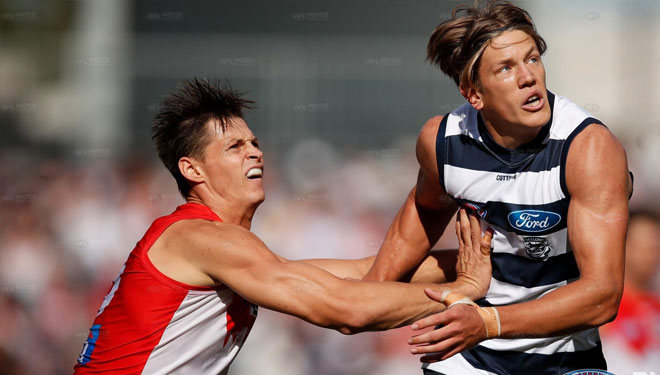 RUCKS
Sinclair was without his understudy this week, with Towers unfortunately missing with an eye injury, replace by Robbie Fox.

This didn’t slow Sinclair down, with the big boy collecting 18 disposals, 14 contested, 39 hit-outs and 4 clearances.

When Callum was dominating, the Swans were dominating. Sinclair had a huge first and last quarter, taking three vital marks – two of them contested – in the dying minutes to help seal the win. 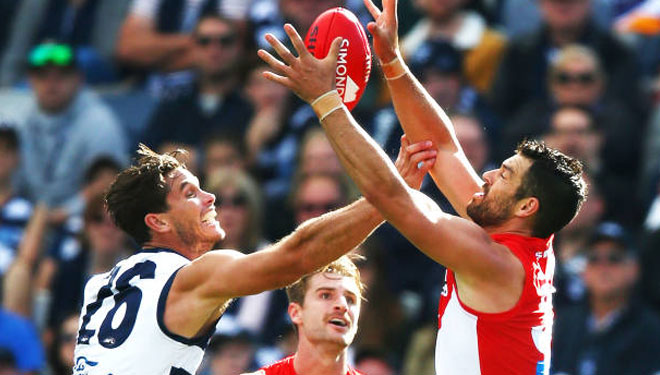 DEFENCE
The Swans defence is beginning to appear like the well-oiled machine we all know and love. They were enormous against the kitty cats on the weekend, giving up only ten goals from 52 entries.

This was on the back of a sensational game from Dane Rampe, Heath Grundy, Jake Lloyd and Jarryd McVeigh.

Rampe had his best game back, dominating every opponent Chris Scott threw at him. He rebounded particularly well with 15 disposals, eight intercept possessions and six rebound fifties.

Heath Grundy battled hard against Hawkins all day. Tom Hawkins managed to put two goals on the board in the second and third quarters, but to be fair to Grundy, there was little pressure on the ball carrier. Grundy finished with 23 disposals and game high marks (12) and intercept possessions (9).

Jake Lloyd’s run and carry from the backline was a godsend, as was McVeigh’s calming influence with the ball. Jake racked up 29-disposals at 73-percent disposal efficiency, leading to a game high 688 metres gained and seven rebound fifties. 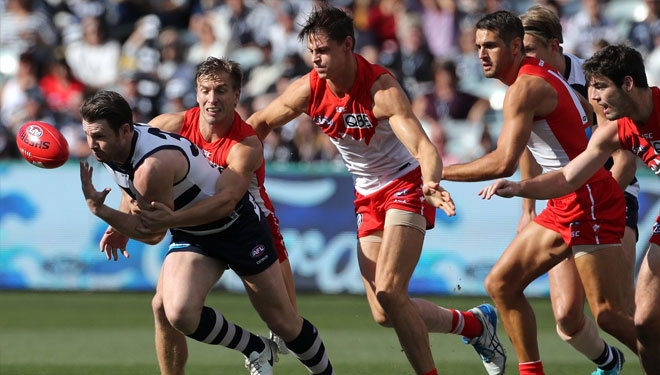 MIDFIELD
It was an interesting performance from the midfield. They ended up dominating the clearance count 50-34 but were -8 in contested disposals.

The midfield was obviously electric in the first and fourth quarter, driven largely by the brilliance of captain courageous Josh Kennedy.

In the middle half of the game, the midfield went missing, with Geelong carving us up through hardness at the contest and spread from the stoppages.

Thankfully, we bounced back in the fourth quarter, winning the ball out of the middle, winning the contested ball and ultimately walking away with the win.

Kennedy played one of the all-time great fourth quarters and reminded us all of what it is to be a blood. Joey racked up a game-high 33 disposals, 17 contested, 13 clearances and 9 inside fifties; seven of those clearances came in the last quarter.

What a way to silence the doubters and the couch critic, Joey is back baby!

I thought George Hewett played a great team game. He kept Selwood quiet for large periods in the match and won his own ball in the last quarter picking up four clearances. He finished the match with 16 possessions, going at 87.5 percent disposal efficiency.

Zak Jones showed a return to form, going at an unheard-of team high 89 percent disposal efficiency. Jones collected 19 critical disposals, and kicked arguably the biggest goal of his career, bursting through a handful of players and slotting it from 45 metres on the run, on an acute angle, to give the boys a real sniff. 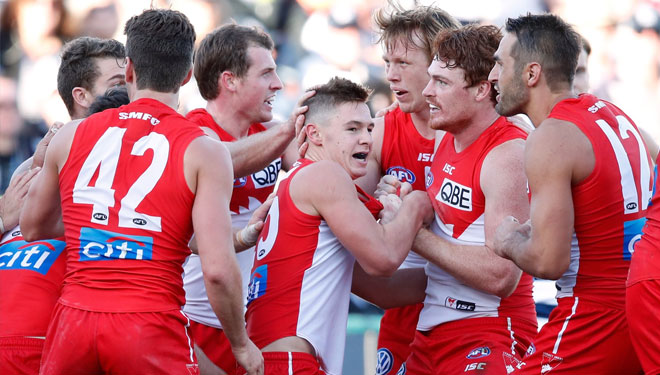 FORWARDS
The mosquito fleet – or the ‘Cygnet fleet’ (baby swan.. yes I googled that) – were incredible. The way they played in the first and fourth quarter was relentless, it was a clinic of how to apply forward pressure.

Gary Rohan, Kieren Jack, Ben Ronke and Ollie Florent all lead by example, and applied some of the fiercest inside 50 pressure I’ve seen from a Sydney outfit in quite a while. They helped us dominate the tackle count 85-to-74.

Jack had a game-high 29 pressure acts, game-high nine tackles to go with his five clearances. His experience and leadership abilities really got the forwards rolling.

Hats off to first gamer Ben Ronke, who slotted into the line-up like he was an experienced campaigner. Two goals for the debutant, along with seven tackles and 19 pressure acts, the kids got a future if he brings the heat every week.

Special mention to Hayward for his three goals, Robbie the Flying Fox for his two goals and a brilliant mark, and Ollie also booted two crucial goals.

It was brilliant to see such a spread of goal kickers, and our little tackers kicking big time clutch goals. 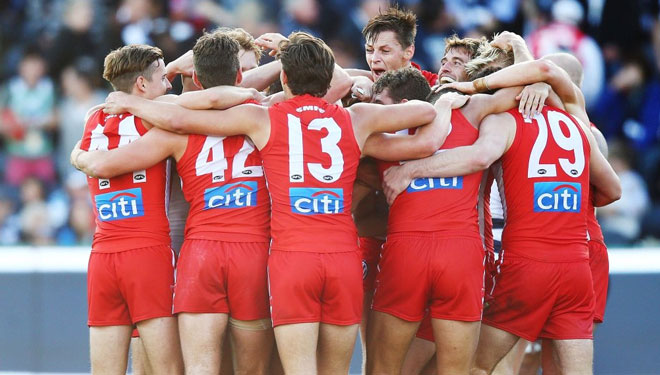 IMPRESSION
Overall, a remarkable bloods win, 22 points down at the last break; no buddy, no buddy worries.

If the Swans can sustain the forward fifty pressure and hardness through the midfield for four quarters, coupled with the impenetrable defence, they will go far this year.

The trick is sustaining the effort for four quarters and we’re yet to see it this year.

The run into the bye provides the Swans with an opportunity to capitalise on their good start to the season, with the Kangaroos, Dockers, Lions, Blues and Saints yet to come.

While the Swans play their banana peel opponent in round 8 (the Hawks of course), if they can play their best football for longer periods, six wins isn’t out of the question.

But let’s not get ahead of ourselves, next round we face a much-improved North Melbourne.

Key match ups include Grundy on Ben Brown, Sinclair vs Goldstein, and Kennedy will likely face the tag of Jacobs.

Scott will likely follow his brother’s tactic and plant Majak as a spare in defence. We’ll have to see how Longmire combats the moves on Saturday night, it could prove a pivotal decision.