The Swans and Roos renew hostilities at the SCG on Saturday night, with both teams having started the season in good form.

North Melbourne, already exceeding expectations, are sitting 8th on the ladder with three wins from six games, with the Swans one spot ahead in 7th with four wins from six.

During the week, the fear was that North Melbourne would attempt to exploit the Swans lack of height, with Reid, Franklin, Naismith and Melican missing through injury, while Aliir lacks form and fitness.

The Swans have resisted the temptation to debut Darcy Cameron or bring back Aliir, sticking with the same team and formula that ran over the top of Geelong last round.

Utility Dean Towers returns to the side for midfielder Dan Robinson, omitted from the side after picking up just eight disposals in the Swans win against the Cats.

The 28-year-old has been impressive for the Swans this season, becoming an important role player, capable of playing multiple positions and backing up Callum Sinclair in the ruck.

Robbie Fox returned to the side last week and was impressive against the Cats, pinch hitting in the ruck and kicking two important goals, one from a spectacular pack mark in the last quarter.

McVeigh kicked two goals the last time these two teams met, while the Swans’ midfield trio of Kennedy, Parker and Hannebery dominated, sharing the Brownlow votes and collected 106 disposals, 5 goals and 22 clearances between them.

Nic Newman was stellar in defence, picking up a career-high 35 disposals, 13 of them contested, while Goldstein collected 41 hit-outs to the Swans 38, 15 of those to Sinclair.

Ben Brown has been in terrific form for the Roos, who has booted 23 goals from the first six matches, while Franklin is the best Swan with 18 goals.

KEY MATCHUPS:
Heath Grundy vs Ben Brown
Ben Brown has been in terrific form the Roos, leading the goal kicking chart for club and league with 23 majors from six games. Port Adelaide proved he can be stopped, and the job will fall to the Swans number one stopper to get the job done. Grundy has been in great form and was one of the best for the Swans in their victory against the Cats in round six.

Ben Jacobs vs Josh Kennedy
Josh Kennedy returned to form last week in the Swans come-from-behind victory against the Cats. After a down fortnight, registering two games of less than 20 disposals, he emphatically returned to form with a best-on-ground performance. Jacobs’ has done a role for the Roos this season, most recently against the Hawks in round 5, blanketing Tom Mitchell.

Callum Sinclair vs Todd Goldstein
Goldstein collected 41 hit-outs the last time these two teams met in round 8 last year, and was one of the Roos’ best players, with two goals. Sinclair has had a stellar start to the season, and in career-best form. He’s averaging more hit-outs, contests won and hit-outs to advantage than Goldstein this year.

THE SIX POINTS:
1: Sydney hold a strong lead in the teams’ recent history, winning four of the last five games, and twelve of the last fourteen. The Swans have won ten of the last twelve at the SCG, since round 20, 2000.

2: The last time these teams met, Kennedy, Parker and Hannebery dominated for the Swans. Hannebery will miss through injury, while forwards Reid and Franklin are also absent.

5: Expect the game to be played between the arcs, with the Swans and Roos ranked 10th and 12th for inside 50s, averaging 52 and 51.8 each. The Swans lead with inside 50 accuracy, converting 51 percent of chances, to North Melbourne’s 47.1 percent.

IT’S A BIG WEEK FOR…
It’s going to be an emotional week for Gary Rohan, playing his 100th career game in his ninth season. The 26-year-old has battled adversity and injury in his nine-year career, with the horrific leg break against the Kangaroos in 2012 temporarily stalling his career. The recent loss of his daughter Willow has made it a tough month, but he received a standing ovation from the SCG faithful against the Crows. 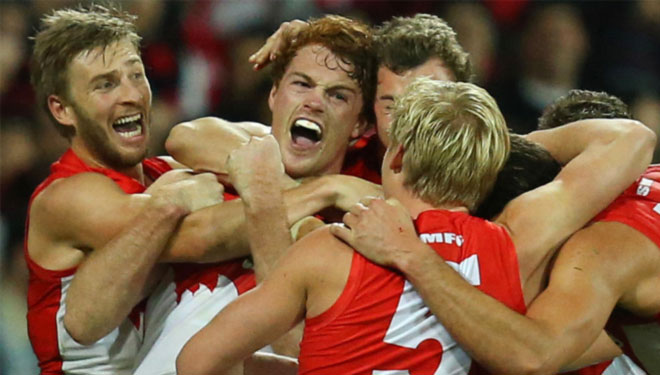 It's finally here! Our very first episode of the SwansCast Extra, our weekend preview show, coming at you every…