Hoodwinked. Trolled. The only way to describe Sydney's stunning team selection this Thursday night, with Swans superstar forward Lance Franklin returning to the team for the Saturday night SCG game.

Comprehensively ruled out on Monday, we've been made to look silly with our injury news today, after Franklin was passed fit and will face the Dockers on Saturday night at the SCG.

“I ruled him out on Monday – that’s how unusual the injury was,” Longmire said.

“But he had a scan again on Tuesday and it surprisingly showed that it was getting better really quickly and again on Wednesday.

“It then got better and better during the course of the next couple of days to the point that he was able to train. He got through really well and it’s great to have him back in the team.”

Dan Hannebery returns to the side alongside Franklin, as the Swans gear up to return to winning ways against Fremantle on Saturday night.

The 27-year-old is a vital player for the Swans and has been sorely missed in his absence.

“He’s missed three weeks but he’s fit. He’s been training now for a couple of weeks – running and now all this week with the balls and looking really sharp.

“He’s an experienced player and a quality player and we’ll need every one of those to be competitive against Freo.”

Forward Tom McCartin retains his place in the side after making his debut last Friday night at the MCG, and will likely back Sinclair up in the ruck, with utility Dean Towers making way.

“We just liked the way he competed in our front half,” Longmire said.

“Our smalls were able to feed a bit off that a little bit and it’s important to keep it simple in our front half.

“Lance can play small as well and that means that Tom will still have to compete in the air against a very strong defence the Dockers have got.” 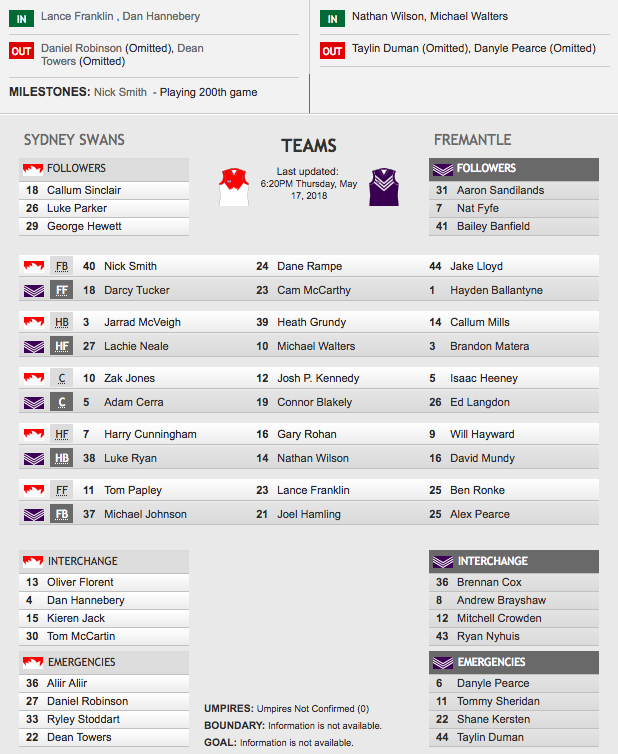 Injury update: Still no Buddy, but Hanners is in contention

The Sydney Swans announced on Monday morning ahead of training, that superstar forward Lance Franklin would miss the upcoming…