What a win by the Swans, what an incredible third game of AFL by Ben Ronke and what a way to bounce back from a disappointing loss to the Kangaroos. What makes it all the sweeter is that we managed to do it against our arch nemesis, Hawthorn.

After three consecutive losses to the Hawks, it was about time we dished out some sweet revenge!

RUCKS
Sinclair competed hard in the ruck, collecting 41 hit-outs and 14 disposals. It was an even contest between both ruckman, with neither getting the better of one-another.

The efforts by Callum Sinclair allowed the Swans to dominate the clearances, 40-to-28, while Ben McEvoy slightly edged Sinclair around the ground, with 2 contested marks and 18 disposals. 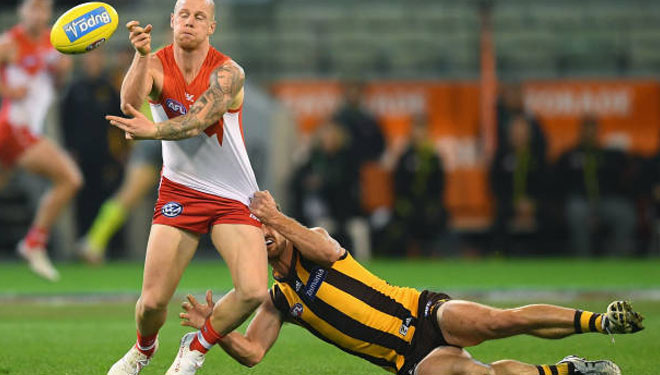 DEFENCE
Despite the Hawks dominating inside 50s 63-to-39, time in forward-half, 56-to-34 minutes, the Swans defence conceded just 10 goals and forced the Hawks into uncharacteristic mistakes.

An incredible defensive effort lead by Heath Grundy and Dane Rampe, ensured the Swans remained competitive until the final siren, even with the overwhelming Hawthorn pressure.

Heath Grundy was elite in defence for the second week in a row, collecting 24 disposals with 92 percent disposal efficiency. He took 8 marks, registered 7 rebound 50’s and recorded more than 400 metres gained.

Grundy dominated Jarrad Roughead, conceding just one goal for the match, kicked in the first minute of the third quarter, while taking an important intercept mark in the dying minutes, which allowed the Swans to counter and kick the match-sealing goal.

Jake Lloyd was fantastic in his milestone match, collecting 36 disposals, 6 rebound 50s and registering a match-high 629 metres gained. He was the class on the outside that the Swans needed when rebounding from their defensive 50, and clearly the difference between the results from last season.

Nick Smith was a rock in defence once again. You’ve played 199 games without a Brownlow vote, and you’re closing in on the record without a vote, but it if were up to me, this wouldn’t be the case.

I’m still not completely sold on our ability to transition the ball from defence to attack. When the Swans regain Lance Franklin and Sam Reid, we will have more options on the outlet kick, and will at least halve the contest at worst. I believe this aspect of the game will improve as the season progresses, but it certainly has proven to be an issue. 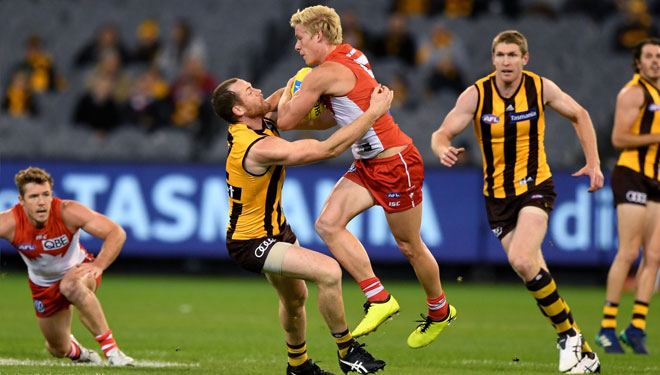 MIDFIELD
Despite the Hawks forward-half dominance, the Swans surprisingly won most of the disposal categories; contested ball +24, disposals +52, inside 50 efficiency +19 percent, +10 clearances and +8 centre clearances.

This was largely on the back of the brilliance of Luke Parker, with 19 contested disposals, 7 clearances and 2 goals. Parker’s form has wavered throughout the season, more so in the last fortnight, but he managed to find his early season red-hot form and was the best midfielder on the ground, no doubt in the Brownlow votes as well.

Unheralded George Hewett played a vital game as well, and although he’s unlikely to receive any Brownlow votes for his shut-down role on Tom Mitchell, he well and truly shut him out of the game.

Oliver Florent had a breakout game and was sensational. Playing primarily on the outside of the contests, the 19-year-old collected 25 disposals, 5 clearances and recorded 23 pressure acts. His last quarter was sensational, recording 8 disposals and regularly broke the lines, especially in the last 5 minutes.

This kid just keeps on getting better, and we are lucky to have so much young talent hanging around the cub.

Harry Cunningham, after a quiet week against North Melbourne, returned to form applying the clinches on Hawthorn’s running machine, Isaac Smith. Cunningham Kept him to a season low 138 metres gained, while quelling his influence. Harry recorded 27 disposals of his own and 428 metres gained. 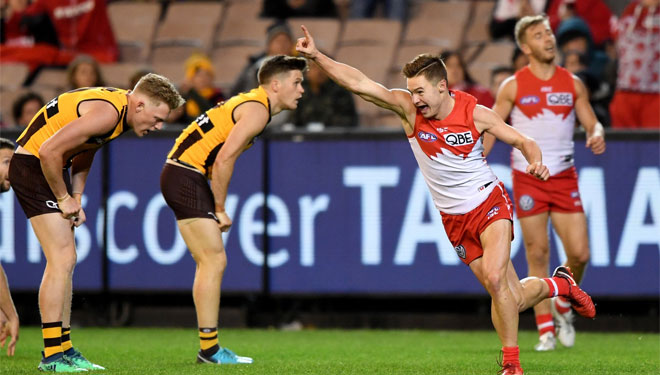 FORWARDS
Ben Ronke, in just his third AFL game, as a rookie nonetheless, played an all-time great small forward game, booting 7 goals and recording a game-high 10 tackles, 7 of those inside forward 50.

Has there ever been a better third game ever played? If there has, I would love to know about it, because this kid played one for the ages. He set an AFL record when he kicked his seventh goal of the match to go with his 10 tackles. It was the ultimate forward-half pressure game, the benchmark if ever there needed to be one.

The Swans went small for the third time in a row, swapping Harry Marsh for Tom McCartin, with McCartin leading up the wing, vis-à-vis Sam Reid.

The combination of first gamer McCartin and Rohan flying for the marks and bringing the ball to ground, really gave the likes of Ben Ronke, Tom Papley and Will Hayward a sniff at ground level.

McCartin was great on his debut, clunking 4 marks, 1 contested, despite his poor disposal by foot. When the forward weren’t marking it, the smalls forward pressure was immense and forced the Hawks into turnovers.

The Swans forward 50 efficiency was far better than the Hawks, recording 56 percent to 37 percent, booting 12 goals from 39 inside 50s, compared to the Hawks’ 10 goals from 63 entries.

Although the Hawks got a little bit of their characteristic precise kicking game going from half-back, I think the pressure applied by our forwards largely subdued their usual rebounding prowess, and their outlet mark down the line was regularly shut down by the Swans defence.

Well done to Hayward as well for his 3 goals from his 15 possessions, he kicked a clutch goal and this kid oozes class. 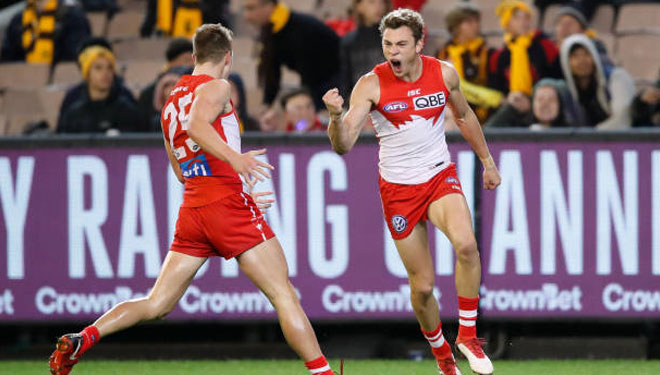 IMPRESSION
What a fantastic game of football, my heart was racing a million miles an hour in that last quarter but that is what makes our game so special. I love this club, and Saturday is a prime example of why. They never gave up, undermanned and undersized they managed to win, from pure fight and persistence.

Next week we face a much-improved Fremantle at the SCG. Let’s hope we can put our SCG woes to bed this week, with a strong performance over the Dockers.

I would love to see Luke Parker versus Nat Fyfe head to head next week, however, look for George Hewett to do another tagging role.

The Swans will have to be careful and precise with their inside 50s, Luke Ryan and Connor Blakely are two intercept marking specialists.

If we play with the same vigour, intensity and heart that we showed at the MCG, the Swans should run out winners.

Injury update: Still no Buddy, but Hanners is in contention

The Sydney Swans announced on Monday morning ahead of training, that superstar forward Lance Franklin would miss the upcoming…

SwansCast Episode 27 - Nothing Ronke with this rookie

Good evening all, it’s Monday and time for another instalment of your favourite Sydney Swans fans podcast, The…