After their stunning win against Hawthorn in Round 7, Ben Ronke and the Sydney Swans return to the SCG for another Saturday night thriller, this time against the Dockers.

Given the Swans away form, they would probably prefer to play the Dockers in Perth, but now that they are home, it is incumbent on them to get the result they need.

The Swans have been triumphant on the road this year, winning four-from-four, while their home ground form been inconsistent, with just one win from four games.

Fremantle’s dependence their senior players and stars is well documented, and while most of them are in great form, they’re a genuine threat to tip the apple cart.

Ben Ronke was the hero for the Swans in Round 7, the 20-year-old rookie booting 7 goals in a match winning performance, in just his third game of AFL football.

Will Hayward has been sensational in Buddy’s absence, kicking 3 goals in each game, trailing the superstar forward by just 4 goals in the club’s goal kicking tally.

Luke Parker’s sensational return to form on Friday night was as welcome to the Swans as it is ominous to the Dockers, who will once again have to deal with the Swans elite midfield quartet of Josh Kennedy, Luke Parker, Isaac Heeney and Dan Hannebery.

Fremantle’s captain Nat Fyfe is in Brownlow medal winning form and likely have the Swans number one stopper, George Hewett, as company from the opening bounce.

Fyfe will need to be at his absolute best for the Dockers to win this one, but it isn’t a one-man show, with Aaron Sandilands in good form, Lachie Neale is in fantastic form, and Stephen Hill’s inclusion adding run and drive from the packs.

Nick Smith this weekend plays his 200th career game for the Swans, in a largely unheralded career by the umpires, despite being an All Australian in 2014.

Smith is yet to receive a vote in his 199 career games, and if he plays out the rest of the year without a vote, he will overtake Tom Longergan (209) from Geelong for the record for most games without a Brownlow vote.

The match looms as another monster test for the Swans’ in-form ruckman Callum Sinclair, taking on the tallest player in the league, Aaron Sandilands.

He’s enjoyed carrying the ruck load this season, growing in form and confidence each week, but without Dean Towers backing him up in the contests, it falls squarely on his shoulders to carry the load.

KEY MATCHUPS:
Callum Sinclair versus Aaron Sandilands
Footballers don’t normally age like fine wines, but evergreen Aaron Sandilands is playing as good as he ever has, at the sprightly age of 35. In his 16th season, he’s racking up big numbers, averaging 42 hit-outs and 12 disposals per match - at or above his career average. Callum Sinclair has been in red-hot form himself, averaging 100 AFL Fantasy points per game, 35 hit-outs, 15.5 disposals and 4 clearances a game.

George Hewett versus Nat Fyfe
Nat Fyfe has been in tremendous form for the Dockers this season, and is one the reasons why Fremantle have surged back up the ladder. He’s a favourite for the Brownlow medal and he’s just getting better every time he plays. The Swans will turn to their primary stopper, George Hewett, whose form has been patchy at best. He got the job done last week against Tom Mitchell and will need to do it again this week.

Harry Cunningham versus Lachie Neale
Lachie Neale and Nat Fyfe have formed a dynamic duo double act, wrecking teams and dominating the midfield. Swans tackling machine Harry Cunningham will have to strangle Neale at every contest, if the Swans want to win this match, given Neale’s averaging 32 disposals – 14 contested, 6.5 clearances and 4 inside 50s per match.

Lance Franklin versus Joel Hamling
No doubt Joel Hamling was expecting Gary Rohan, Will Hayward or even Tom McCartin, until 6.10pm on Thursday night. Now he is dealing with Lance Franklin, the second time he has lined up on him after the Bulldogs 2016 AFL Grand Final win. Until his omission after Round 5, Franklin was leading the Coleman, as well as scoring involvements, goal assists and goals kicked at the Swans. The Swans have won two from three in his absence, but will greatly enjoy his return to the side and goal kicking power

3: The Swans are the equal-highest clearance team in the league, averaging 40.5, the Dockers a distant 11th, with Swans midfield bull Josh Kennedy the equal-fifth ranked clearance player with 58.

6: Neither team have been prolific scorers, with the Swans averaging 85 points to Fremantle’s 78 points. The Swans have been better at converting their chances inside 50, and with Franklin back in the team, the Dockers will want to keep it between the arcs.

IT’S A BIG WEEK FOR…
The recalled Sydney Swans superstar forward Lance Franklin has not played since Round 5, missing three matches with a bruised heel. The Swans have won two from three games in his absence, but with his stunning recall from the seeming abyss, it is important that he performs unrestricted. 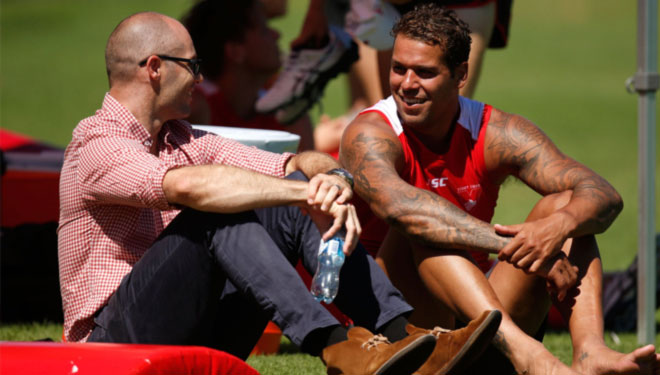 Report: Swans rocket up the ladder off the back of Dockers drubbing