In terms of games played this weekend, few have greater finals ramifications than the blockbuster clash between the Sydney Swans and Melbourne Demons on Sunday afternoon.

By the time the penultimate match of the weekend kicks off, both teams will know what a win guarantees, with a potential top four position on the line if results fall their way.

If the teams around them win, they will need to win to stay in touch of the front runners, guaranteeing an epic finish to a mega weekend of football.

The Swans sailed into the mid-season bye after their Round 13 win against top-placed Eagles, before falling well and truly off the wagon with losses to Richmond, Geelong, Gold Coast Suns and Essendon.

A desperate, last-gasp win last weekend against premiership contenders Collingwood kept the Swans in touch, while the Demons did more than dismantle the Suns – they gave them a football lesson.

Both teams’ run into the finals is as tough as it comes, with the Swans facing the Giants (SPO) and Hawks (SCG) in the final two rounds, while the Demons play the Eagles (PS) and Giants (MCG).

A win for either team will be enormous for their belief and give them the best possible platform for a top four finish, with all the teams around them playing other contenders before the end of the season, with anywhere from third to tenth up for grabs.

Despite the possible return of Swans midfielder Dan Hannebery (calf), the Demons still have a significant advantage in the midfield as the No. 1 ranked team for contested possessions and centre clearances.

With Franklin nearing his best once again and closing in on an incredible fifth Coleman medal, trailing Ben Brown by just four goals, the Demons will have their hands full stopping the superstar forward.

Dane Rampe vs Jesse Hogan
Sydney’s best defender will need to be at his best to limit Melbourne’s spearhead, Jesse Hogan. With 46 goals to his name, the athletic forward is at his absolute best outside the fifty, regularly racking up more than 20 disposals and 10 marks this season.

Callum Sinclair vs Max Gawn
Max Gawn is the premier ruck in the AFL, narrowly edging Brody Grundie for the honours. The last time they faced each other, Gawn racked up an incredible 58 hit-outs to Sinclair’s 14. Last week, Grundy was arguably best on ground with 57 hit-outs – he had more hit-outs to advantage than Sinclair’s 16 hit-outs for the match.

Lance Franklin vs Sam Frost
Lance Franklin’s hardly trained at all this season, battling through an injured heel suffered in Round 1 against the Eagles. It’s hardly stopped his goal scoring potential, with four bags of 4 goals and 6 against the Pies last week. Frost has the unenviable job of limiting him – good luck.

1: Lance Franklin and Jesse Hogan top the goal scoring charts, Franklin second behind Ben Brown on 50, while Hogan is sixth with 46. Both players loom as match winners for their clubs.

3: The MCG isn’t Sydney’s favourite venue, winning just 5 of their last 10 matches since 2016. It’s no problem against the Demons, winning their last 4 matches by an average of 33 points.

5: The Swans’ scoring woes continued last week, scraping past 70 with just over two minutes left in the match for the first time in three rounds. The Swans are ranked 15th for inside 50’s, while the Demons are the top ranked side.

6: Lance Franklin was the difference between the sides in Round 15 last season, kicking four of the Swans’ 11 goals of the match. The Swans eventually won by 35 points after kicking 2.14 early in the second quarter.

IT’S A BIG WEEK FOR…
It doesn’t get any harder for Callum Sinclair this week against arguably the best ruckman in the league, Max Gawn. Sinclair was influential in Sydney’s come back in the third quarter last week, quelling Grundy’s influence around the ground, while hitting the scoreboard. Gawn will win the hit-out battle, but can Sinclair hurt him on the scoreboard? 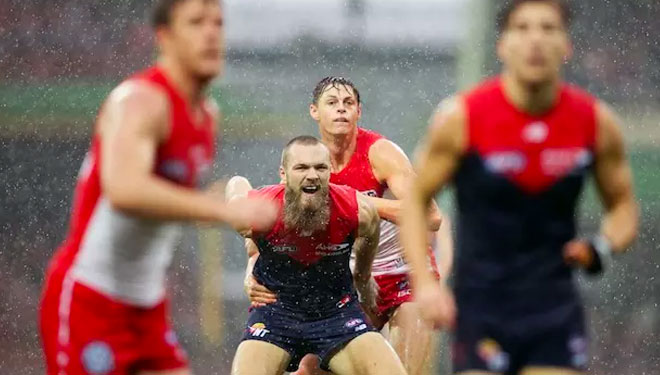 Emotions ran high at the MCG on Sunday night, after the Swans hung on for a desperate nine-point win,…

SwansCast Extra Episode 7 - Demons do or die, can Hannebery make it?