With a crippling pall thrown over the Swans defence, their parts seemingly cast asunder, almost incapacitated, two giants stand tall in the carnage casting a shadow over the competition.

Their defence – almost incapacitated with the incredible injury list – has somehow stood firm over the last month, despite the herd thinning through natural attrition, courting not only praise from their peers, but demonstrating a resoluteness that few thought capable.

Any other side in the competition would struggle to field elite defenders when almost all of their first players have been struck down by injury. With Lewis Melican absent for most of the season, the burden has rested on the shoulders of Heath Grundy. With Grundy and now Alex Johnson missing, the Swans defence depends on Aliir Aliir and Dane Rampe.

Alex Johnson’s chance came – he earned it and played in a manner befitting a true professional. Though his heartbreak is shared by all, the Swans will feel it most, with almost no options to pick from in their extended squad. Almost all of their defenders have been struck down with injury in recent weeks, with Zak Jones and Colin O’Riordan the only fit options. 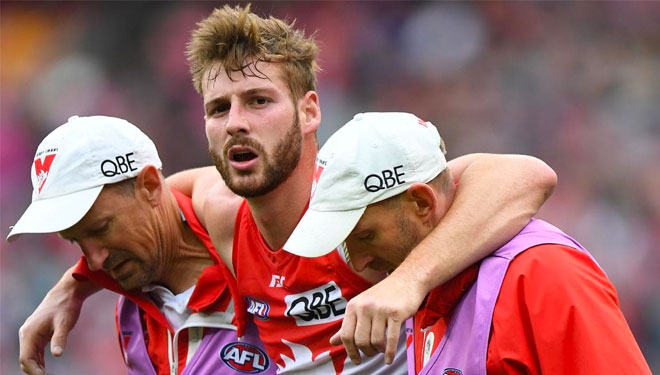 But through tragedy and pain, there’s opportunity, and this time it’s one that Aliir Aliir has taken with both hands. Form and fitness issues aside, his 2017 season was a disaster. He played early in the year when he wasn’t even half fit, and was eventually dropped from the side, despite an impressive performance against Collingwood.

After the infamous ‘sleep-gate’ incident on the player-arranged training session on the Saturday before the Brisbane Lions match in Round 7, Aliir found it difficult to break into the side, ahead of his housemate Harry Marsh, and fellow defender Lewis Melican. While being regularly criticised for fitness and form issues in the NEAFL, some of it warranted, one can’t help but cast their eyes back to his breakout year in 2016.

His first 10 games were absurdly good, each game better than the last. Along with fellow first year player Callum Mills, their partnership was rated as not just elite, but one of the best intercept defensive partnerships in the league. The injury suffered against Geelong in the preliminary final arguably killed the Swans’ premiership run and set him back for months.

Yet, despite his amazing debut season, just two months ago he was virtually in football wilderness. Out of contract and as far as the fans could see, hardly a home to be seen in Sydney. We talked about Aliir Aliir on every episode of the Swans Cast this year, his future, what he offers the team and where he can fit in. The commentary regularly mirrored the pulse of the fan base, divided on his future not just in the side, but in Sydney.

I’ve always been a firm believer of Aliir’s potential, and ability to be not just one of the best intercept defenders, but the best in the league, even better than Jeremy McGovern. His stats since his return to the side in Round 13 this season are incredible – Aliir has taken his game to new heights, higher than any other defender in the league.

While his ability to read play, intercept the ball and close down defenders has always been highly rated, his positioning was always considered suspect - especially when North Melbourne exploited in Round 22, 2016. Since Round 13 this year, his positioning hasn’t been a problem. While he’s not the typical tall, physical player like Alex Rance, or Heath Grundy, his athleticism is arguably his greatest asset. 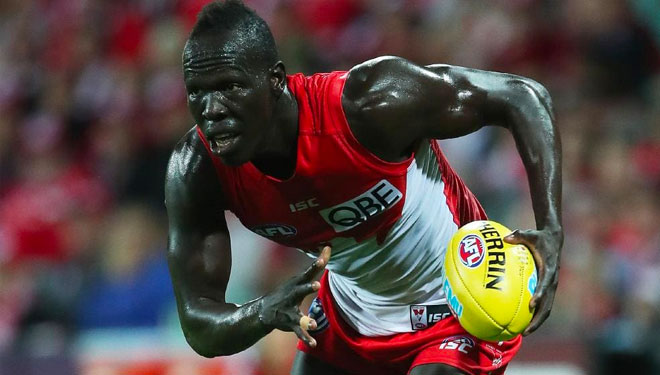 His ability to impact the play this season has been second-to-none. Since Round 13, he’s ranked first for intercept marks (35) and equal top for intercept possessions with Jeremy McGovern, well clear of Alex Rance. While McGovern’s goal sunk the Power on Saturday afternoon, Aliir’s goal against North Melbourne was even more important – it’s the only reason the Swans are still in finals contention.

Such has been his rise this season, Melbourne did the one thing they do to limit his impact, they played a forward on him and forced him to defend, because like Collingwood the week before, they just kept kicking the ball to him.

Aliir’s ability to take intercept marks and contested marks inside the Swans’ defensive 50 has been a big reason for their recent turn around. His ability to take those marks thwarts their opponent’s ability to score, and his elite disposal regularly launches counter attacks for the Swans.

Melbourne did their best to shut him down on Sunday afternoon, but not before he turned away virtually every attack in the second and third quarters, helping the Swans out to an important 28-point lead at three quarter time.

With Lewis Melican’s repeat hamstring strains and Heath Grundy’s decline leaving the Swans short-handed in defence, Dane Rampe has taken over the role as the gorilla defender, taking the league’s biggest and best forwards. Like Aliir, his ability to impact the contest has been a critical component of his ongoing success.

Relatively diminutive by historical standards, weighing in at just 89kg’s and standing 189cm tall – a size you would expect from a back flanker or back pocket, he takes on the best every week, often giving away over 15kg and 10cm in height. It’s rarely limited his ability to beat his opponent, with Tex walker, Jeremy Cameron, Josh Kennedy (WCE), Jarrad Waite, Joe Daniher and Ben Brown among his victims. 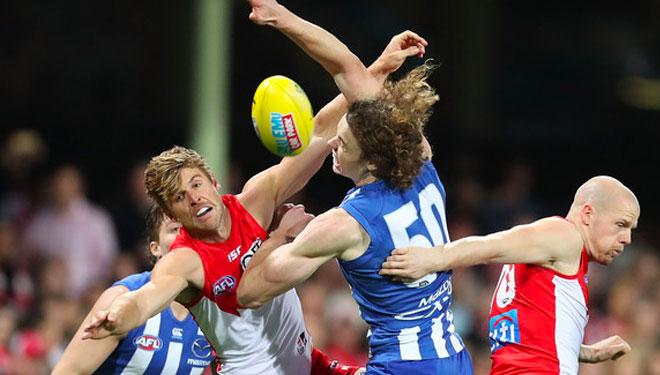 He first played in the days of Ted Richards and Heath Grundy as a back-pocket player, with a penetrating left foot and an innate ability to intercept the play. As the years have passed, he’s grown to one of the pre-eminent defenders of the league, easily considered in the top three or four defenders, along with Jeremy McGovern and Alex Rance.

Such is Rampe’s ability to regularly beat his direct opponent, often times convincingly, that Hawthorn coach Alastair Clarkson sought out the AFL’s CEO to voice his disapproval and concern of his defensive tactics. Even with the microscope and media glare, he didn’t wilt, he just got on with the job, even as his defensive cohorts fell to the way side.

The passing of the torch is almost complete. Heath Grundy’s slowly edging towards retirement, while 28-year-old Dane Rampe continues to improve with every game. His leadership qualities are undoubted – anyone that’s seen him live at the ground, will have heard him marshalling the troops, positioning them on the field like a general.

With Aliir, the Swans have found the perfect partner in crime for Rampe. Both quick and agile defenders, physically strong and very capable on the ground and in the air, and importantly very good ball users, they’re in and out before you even knew they were there.

The Sydney Swans have welcomed back tough defender Zak Jones back to the team, for the blockbuster Sydney Derby…

Much has been said about the Swans midfield depth, or lack thereof this season, with what seemed to be…