After a season of low crowds, record low scores and constantly speculation from the AFL over rule changes, the penultimate round shapes as one of the most crucial rounds of football in recent history.

With two games left to play in the season and eight teams still in finals contention, few matches are more important than Sydney Derby XV.

After winning just 1 game from 6 between Rounds 5 and 10, including home losses to the West Coast Eagles and Essendon, they turned their season around winning their last nine from ten games.

Despite a mounting injury list, featuring some of the best players in the league, the Giants have managed to grind out wins against adversity, continuing their march towards September

The Swans on the other hand haven’t been able to field the same team consistently all season, struggling with various form and fitness issues since the pre-season.

Alex Johnson made his emotional return to senior football against Collingwood in Round 20 this year, but tragically injured his right knee against Melbourne in Round 21.

Down two players from quarter time, the Swans held on for a stunning win against the fast-finishing Demons, refusing to yield under incredible pressure, with Heeney taking arguably the mark of the year in the final minutes.

While the Swans and Giants played their first finals derby in 2016, with the Giants winning that day, few matches are more important than Sunday’s derby.

WHERE AND WHEN:
Spotless Stadium, Saturday, August 18, 4.35pm AEST

KEY MATCHUPS:
Lance Franklin vs Phil Davis
Davis had Franklin’s number in Round 3 this year until the final five minutes when Lance went bang, with two scintillating goals including a 70m bomb, that ensured victory for the Swans. It’s one of the best matchups to watch in football and will go a long way towards determining the outcome.

Dane Rampe vs Jeremy Cameron
When Cameron’s on he’s almost impossible to stop. His battles with Rampe are always entertaining and while Cameron has more recently had the better of their duel, it always rests on a knifes edge.

Josh Kennedy vs Callan Ward
Both captains will want to prove themselves for the massive clash. Ward suffered concussion in Derby XIV earlier this year, but if it wasn’t for the modern concussion rules, he would have returned to the field. Kennedy’s form has been up and down all season, but with plenty of ball winners on both teams, he stands as the most important.

1: For two consecutive weeks the Swans face the No. 1 clearance team in the league, the Giants averaging +3 more. The Giants smashed the Crows last week and now lead the league in overall clearances and stoppage clearances.

2: Despite the Swans struggling to score more than 70 points, and scoring more than 100 just four times this season, they’re the second most accurate team in the league, ranked 2nd for behinds per game (9.3), while the Giants are ranked 18th (13.5)

3: The Swans hold an overall 10-4 record over the Giants, winning the last two matches, but trail the Giants 2-3 over the last 5.

4: Callum Sinclair was the difference between the two teams last time they met, booting 3 goals to go with his 6 clearances and 45 hit outs. Callum Mills, the Brett Kirk Medal winner, is out for the season

5: Despite playing one of the smallest teams in the league, the Swans are the 4th best contested marking teams with 236, ahead of 10th ranked Giants with 223

6: Lance Franklin has been the match winner for the Swans in their last two Sydney Derby’s, booting important goals in the last quarter. He’s 3rd in the Coleman Medal race, 11 ahead of 9th place Jeremy Cameron

IT’S A BIG WEEK FOR…
Tough defender Zak Jones returns to the side after serving two weeks for his indiscretion against Essendon, missing wins against Collingwood and Melbourne. The job against the Giants doesn’t get any tougher and the Swans can’t afford any mishaps. 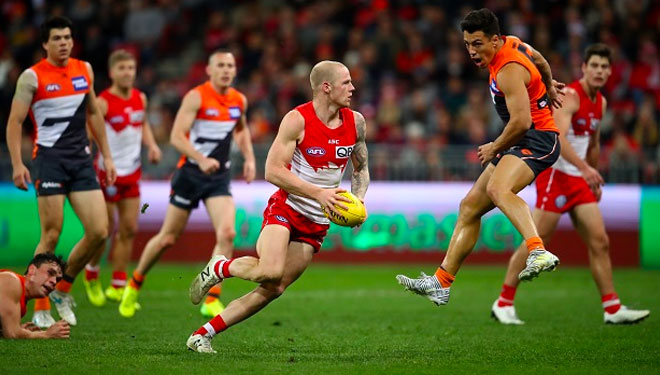 Heeney's screamer just about a lock for Mark of the Year

With just two weeks of football remaining, it's going to take a serious effort to knock down Isaac Heeney…

The Sydney Swans have welcomed back tough defender Zak Jones back to the team, for the blockbuster Sydney Derby…