The Swans will be looking for a four-quarter effort from their midfield department when they take on the Adelaide Crows on Friday night at the SCG.

With both teams' season resting on a knife's edge, losing is not an option, with just three teams from the last 15 years reaching the finals when they've started the season 0-2.

The contest should have been over by quarter time in their Round 5 match last year, with the Crows booting 4.9, but in the end it didn't hurt them.

The Swans threatened a boil over late in the third quarter, before four consecutive goals sealed the win.

Both teams have made two changes, with Heath Grundy (injured) and Jordan Dawson making way for Ben Ronke and Colin O'Riordan, while Paul Seedsman and Kyle Hartigan come in for Tom Doedee (ACL) and Richard Douglas (injured)

Dane Rampe vs Tex Walker
Last time they played Walker booted 4 goals and picked up 2 Brownlow votes, playing back into form. Rampe has had his number in the past and he'll need to be at his best to stop him again if the Swans hope to win the game.

Callum Sinclair vs Sam Jacobs
Big "Sauce" Jacobs has done the job on Sinclair each time they've played, easily besting him in the ruck and providing more ground presence. Sinclair will need to exploit Jacobs' lack of athleticism to win the contest, which may prove crucial to giving his midfielders first use of the ball.

Lance Franklin vs Daniel Talia
They've had great battles in the past, with Talia getting on top in Round 5 last year, but Franklin utterly dominating in Round 22, 2017. Talia and Phil Davis are the only defenders who've regularly beaten Franklin, but when Franklin gets on top, his side always wins.

1: The last time they played, a 4.9 first quarter set up Adelaide's win. The Swans came back hard, but another 4-goal burst both sides of the last break sealed the win.

2: Lance Franklin has enjoyed success against the Crows in recent years, kicking 18 goals from 5 games between 2014 to 2017. His 1 goal effort in Round 5 last season was his lowest against Adelaide since 2013.

5: Sydney's once vaunted fortress the SCG was more a graveyard for the Swans last season, winning just 4 of 12 matches, snapping a 7-game win streak in 2017.

IT’S A BIG WEEK FOR…
With Heath Grundy missing through injury, it falls to Lewis Melican to take the big power forwards. He struggled last week and has had his issues against the big forwards in previous games, especially Adelaide. 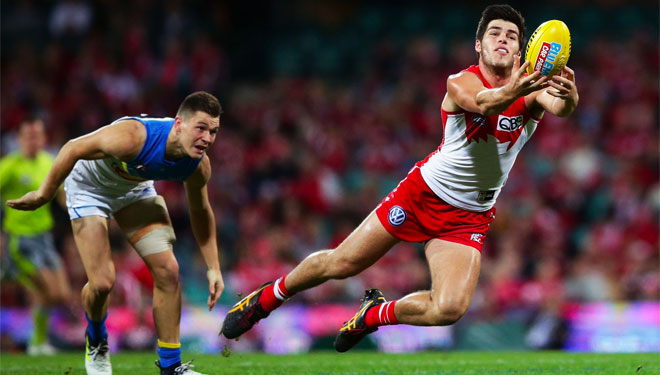 The ghosts of season past have come back to haunt the Swans on Friday night, unable to shake off…