With the Sydney Swans' season already teetering on the brink, a zero-three start would be disastrous and all but rule out their dreams of finals in 2019.

Reeling from two consecutive poor performances, facing cellar dwellers Carlton would normally be considered a comfortable win, but that is not the case on Saturday afternoon.

While Carlton have been competitive in their opening games, the Swans have been anything but, averaging just 63 points per game, while conceding an average of 85 points.

Carlton on the other hand, who sit below the Sydney Swans with minus 1.2 percent difference, are averaging almost 70 points per game.

Despite two tough opening games against premiership favourites Richmond and top-four challengers Port Adelaide, Carlton acquitted themselves well, leading for significant patches against the Power, while giving the Tigers a mighty scare.

The Swans haven't had such luck, struggling for consistency and effort from quarter-to-quarter, registering two goalless quarters and scoring 1.2 in the first quarter of their opening two games.

While Carlton coach Brendon Bolton has been positive in Carlton's defeats, Swans coach John Longmire has lamented his sides ability to contest, and bring consistent effort.

It has lead to the Swans making three changes ahead of their Round 3 clash, dropping out-of-form defender Lewis Melican and recruit Ryan Clarke, while the Blues have gone for height in their forward line.

WHERE AND WHEN:
Marvel Stadium, Saturday, April 6, 1.45pm AEDT

Phillips has stared the season in good form, and even though Sinclair should win the hit-out count, the real contest is when the ball hits the ground.

George Hewett vs Patrick Cripps
Patrick Cripps has been in red-hot early season form, and is already firming as one of the early favourites for the Brownlow medal.

Averaging 32 disposals - 22 contested, 10 clearances and 6 tackles per game, Sydney's number 1 stopper will have to lift his form considerably to thwart the seemingly unstoppable Cripps.

Will Hayward vs Nic Newman
The former Swan, who found himself a new home at Carlton, has hit the ground running, averaging 23 disposals, 10 rebound 50s and almost 550 metres gained per match.

Hayward has found it tough going this season, often taking the second or third best defender, while kicking 3 goals and averaging 11 disposals.

1: The last time they played, a 5-goal unanswered third quarter by the set up their 30-point win. Until that point, Carlton lead at times during the opening two quarters, holding a 1-point half-time lead.

2: Sydney has lost its past three games, averaging just 53 points. They currently have the third lowest points for in the competition after the two opening rounds, with only Essendon and Melbourne scoring less.

4: The game will most likely be won between the arcs, with both teams averaging 51 inside 50s per game and 24 stoppage clearances per game in 2019.

5: Sydney once held a formidable record at Marvel Stadium, winning 14 from 15 matches at the venue between 2012 to 2018. They've since lost 3 of their last 4 matches by an average of 29 points at Marvel.

IT’S A BIG WEEK FOR…
With Heath Grundy missing through injury and Lewis Melican dropped from the side that took on Adelaide in Round 2, Aliir Aliir will lead the Swans defence in their absence.

The enigmatic defender is best known for his intercepting and rebounding ability, but will have to demonstrate a controlled game to limit Harry McKay and Mitch McGovern's influence on the match. 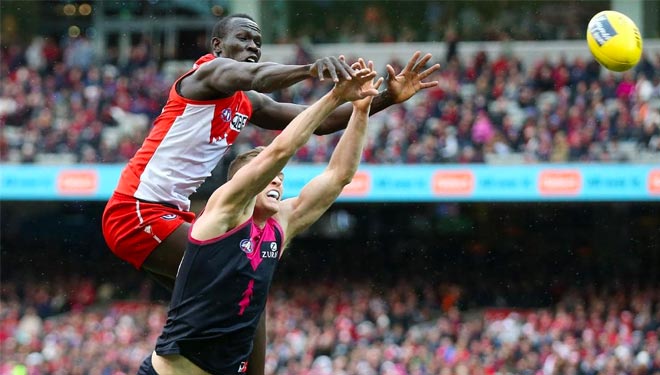 Arriving at Marvel after somewhat surprising losses to the Western Bulldogs and Adelaide Crows, the Swans were in desperate…

The Sydney Swans received a boost during the week, with the good news that forward Dan Menzel is progressing…