The Swans' stuttering season runs head-on into an Essendon outfit desperate to stay in touch of the top 8.

Sydney's season is already in tatters, with finals out of reach, almost all of their seasoned veterans missing through injury.

While the Swans managed to claw their way out of a similar situation in 2017, losing the first six matches of that season, the 2019 edition looks far less capable.

While Sydney Swans senior coach John Longmire used variants of the 'R' word to describe the current state of the playing list in his Round 6 post-match press conference, he was quick to praise the impressive Brisbane Lions outfit last week.

The difference in the two teams was stark; it was a reminder of what can happen when you're at the top for so long, and continually buck the AFL's cyclical trend.

There were warning signs in 2018 after the bye, with losses to Richmond, Essendon, Geelong and the Gold Coast Suns foreshadowing their current predicament.

Thrilling wins against North Melbourne, Collingwood, Melbourne and the GWS Giants gave the Swans hope, before the Giants well and truly realigned expectations.

With nothing more than pride and an improved ladder position to play for, currently 18th by percentage, the Swans will be out to prove a point - that there's still life in their season.

Essendon haven't had it all their way either this year, failing to show up for the first 6 quarters of the season.

Impressive wins against Melbourne, Brisbane and North Melbourne were undone by consecutive poor performances, that leaves their season resting on a knifes edge.

Essendon have to win on Friday night if they're serious about playing finals.

Anthony McDonald-Tippingwuti looms as the danger man for the Bombers, with 13 goals already this season, including 7 against Brisbane, while enigmatic spearhead Jake Stringer is set to torture the Swans beleaguered defence.

Tom Bellchambers has proven his doubters wrong this year, racking up plenty of ball and is rated elite for hit-outs to advantage (37.6%).

Sydney on the other hand haven't had consistent performances from game-to-game, let alone quarter-to-quarter.

Harry Cunningham, Sydney's most consistent player this season, was the latest player to be struck down by injury, ruled out for 8 weeks with an adductor strain.

Superstar forward Lance Franklin is in doubt for Friday night, facing a race against time to prove his fitness, while Tom Papley faces the same dilemma.

Scoring has been a huge issue for the Swans this season, ranked 15th for points conceded and 14th for points scored.

The SCG no longer holds the fear factor that it once does, and the Swans have seemingly forgotten how to play it.

The only thing that's in their favour is their recent history against Essendon at the venue, winning the last 6 since 2010, and winning 10 of the last 12, with Essendon breaking an 8-game win streak last year in Round 19.

Callum Sinclair vs Tom Bellchambers
Callum Sinclair started the season in great form, but has found the last 4 weeks some of the toughest of his career. Belted in hit-outs by Max Gawn, registering just 9 in Round 4, before Shane Mumford, Stefan Martin and Oscar McInerney took their turn crashing into him. Tom Bellchambers on the other hand has seemingly wound back the clock, finding form and providing enough impact at the contest to be considered an extra midfielder.

Dane Rampe vs Jake Stringer
Jake Stringer is as capable a match winner as there is in the competition, booting 14 goals from 27 shots, and almost inspiring a woeful Essendon to victory in Round 6 against Collingwood. Dane Rampe has been Sydney's best defender of the last three years, and will need to be at his best to stop the athletic and powerful forward.

1: Sydney's holds a strong record against Essendon at the SCG, winning the last 6 encounters, while they've won 10 of the last 12 games - Essendon's Round 19 win last year broke a 6-game streak.

4: Whichever team capitalises on turnovers will give themselves every chance of win, with Essendon ranked 12th in the league for turnovers (73.4 per game), while the Swans are ranked 15th (74.3).

6: Joe Daniher may prove to be the difference between the sides, kicking 7 goals in his 3 games after returning from a long stint on the sidelines.

IT’S A BIG WEEK FOR…
He's just one cog in a struggling forward line, that's barely been able to score, but it's time Sam Reid stood up and lead the line in superstar Lance Franklin's absence. With 6 goals from 7 games this season, Sam Reid needs to perform. 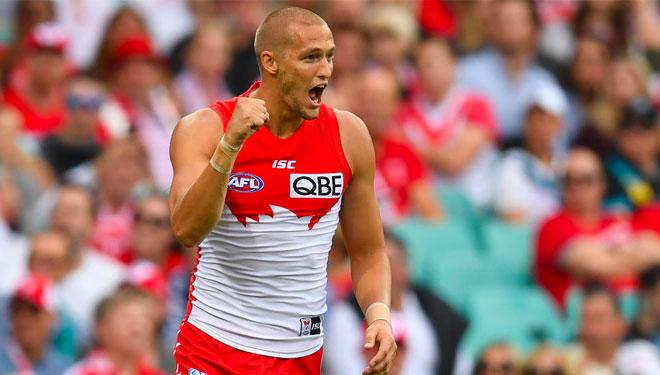 The Sydney Swans have made one change ahead of their Round 8 clash against Essendon on Friday night. Midfielder…

Sydney's stuttering season, riddled with injuries and poor performances, appears to have hit another road block, with veteran defender…