The Swans and Roos revive hostilities on Saturday night, with both teams finding themselves on the lower rungs of the AFL ladder.

After indifferent starts, they finally notched their second wins of the season in recent weeks - North against Carlton in Round 7 and the Swans against Essendon in Round 8.

After two highly entertaining clashes last season, with Aliir Aliir's last-gasp goal sealing the win for the Swans at Etihad Stadium, there's little that separates the sides this year.

Both sides' inability to score, or prevent teams from scoring against them underlines their ladder positions, the Swans sitting 16th and the Kangaroos 17th; only Carlton sits below them in 18th with one win.

While the 'R' word has been tossed up at the Swans, John Longmire's recent subtle dig at the consistency is his sides' performance after their Round 7 loss to the Lions spurred his side into action.

With neither side gaining an advantage in Sydney's Round 8 clash against Essendon, Nick Blakey's dramatic chase-down tackle on Jason Redman with 28 seconds left in the last quarter looked to have sealed the Swans' second win of the season.

But a wayward kick and a quick switch of play gave the Bombers hope, with David Myers marking on the siren and lining up from 65 metres out.

North Melbourne on the other hand, took on ladder leaders Geelong and never looked at the races.

Forward Ben Brown finally found form in the third quarter, booting three of his five goals in a 5-minute spell, dragging the Kangaroos within 10 points and an unlikely upset.

But for all their hard work and statistical dominance, they simply couldn't convert their opportunities, conceding the match in the opening quarter.

Kangaroos coach Brad Scott will be feeling the pinch this week, and will be desperate to get a win, to validate the sides desperation to bring players in from other clubs.

So far, Jared Polec has been a quality addition to the team, playing more midfield than defence, while Jasper Pittard and Aaron Hall have failed to impress.

Likewise, the Swans recent trades have failed to hit their marks, with Jackson Thurlow looking to have finally settled in the senior team, and midfielder Ryan Clarke twice dropped.

The Swans are undefeated against North Melbourne in Tasmania and will want to keep it that way, and give their fans something to cheer about, while a loss all but consigns the Kangaroos to a bottom four finish for the season.

Aliir Aliir vs Ben Brown
Ben Brown finally found some form in Round 8, booting 5 goals against the Cats - 3 of them in a 5-minute spell during the third quarter. With Melican and Grundy missing at times this season, Aliir has been entrusted to take on the opponents key forward.

Dane Rampe vs Jack Ziebell
North Melbourne's captain Jack Ziebell has spent more time forward than any previous season, regularly playing at full forward. Like Dangerfield, he's quick and strong on the lead and good overhead, and can transition into the midfield when needed. Dane Rampe is the only match-up the Swans have, like-for-like height, weight, strength and power.

George Hewett vs Shaun Higgins
Shaun Higgins is an elite ball user and regularly racks up more than 30 possessions a game and 500 metres gained. A capable outside player, he's equally as good on the inside, with his ability to burst from packs at speed. After an indifferent start to the season, Hewett's last three weeks have been a dramatic improvement, and he well and truly shutdown Dylan Shiel and Zach Merret in Round 8.

Tom McCartin vs Scott Thompson
It doesn't get more unlikely than an experienced, wily, 33-year-old Scott Thompson taking on the exuberant, 19-year-old Tom McCartin in his 22nd game, but with the way that Tom McCartin played on Michael Hurley last week and forced him to be accountable, it may well be the match-up the Swans try to exploit. Hurley had none of his usual impact, and if the Swans can limit Thompson, it will go a long way towards victory.

1: Sydney are undefeated in Tasmania, having beaten North Melbourne twice at Bellerive Oval and Hawthorn in their only game at York Park.

2: North Melbourne are still a contested ball winning team, even if stats this year don't reflect it. The Kangaroos are ranked 13th for contested possessions with 141.4 per game, while the Swans narrowly trail in 15th with 140.8 per game.

3: North Melbourne are the 4th ranked possession team in the competition, averaging 394 per game, 1st for handballs with 188.3, and 1st for disposal efficiency with 74.6 percent - the Swans are ranked 9th, 6th and 10th respectively.

5: Despite playing undersized Callum Sinclair in the ruck, the Swans are ranked 13th for total clearances in the league with 292 - 30 ahead of 17th placed North Melbourne with 262.

IT’S A BIG WEEK FOR…
A big return to form for George Hewett has seen him shutdown the oppositions best midfielders the last two weeks. His job on Dylan Shiel in the first half was breathtaking, limiting the damaging midfielder to just 4 disposals at half-time.

Zach Merrett found himself under his clutches in the last quarter, as the Swans desperately held on for their second win on the season. With Shaun Higgins and Ben Cunnington winning plenty of football, Hewett has another steep task ahead of him, and will rely on the likes of Isaac Heeney and Zak Jones to help. 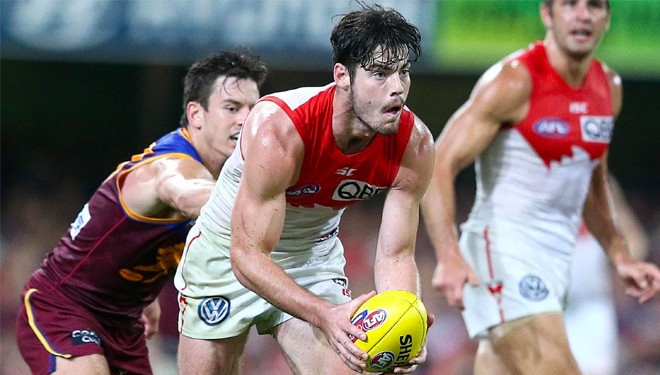 There are games when a team is right up against it before the game even starts, their backs are…