The Swans have made two changes ahead of their Round 11 clash against the Geelong Cats at GMHBA stadium on Saturday afternoon.

Former Cat Daniel Menzel will make his debut for the Swans, after being named as one of the two inclusions.

Veteran defender Jarrad McVeigh returns to the side after overcoming a quad strain suffered in Round 3 against Carlton at Marvel Stadium.

Menzel, who played 73 games for Geelong and averaged two goals a game, will face his former side in his first game for Sydney, since joining the club as a free agent at the end of 2018.

Swans Coach John Longmire was delighted to welcome Daniel Menzel to the senior side.

“It is great that he gets his opportunity to pull on the Sydney Swans jumper at senior level for the first time,” Longmire told QBE Team Selection.

“He has been playing in our reserves for a few weeks but it is great to have him in for our game down at Geelong.

“Regardless of who we were playing his form last week particularly in the second half was good and gives us another option in our forward line.”

Former captain Jarrad McVeigh has not played since Round 3, but has been training with the senior team the last two weeks.

“It is good to have him back in the team, he is obviously very experienced and has been doing a power of running,” Longmire said.

“He has been training for a number of weeks now and is ready to go."

Co-captain Josh Kennedy has been ruled out with a knee injury, while former Geelong defender Jackson Thurlow has been omitted. 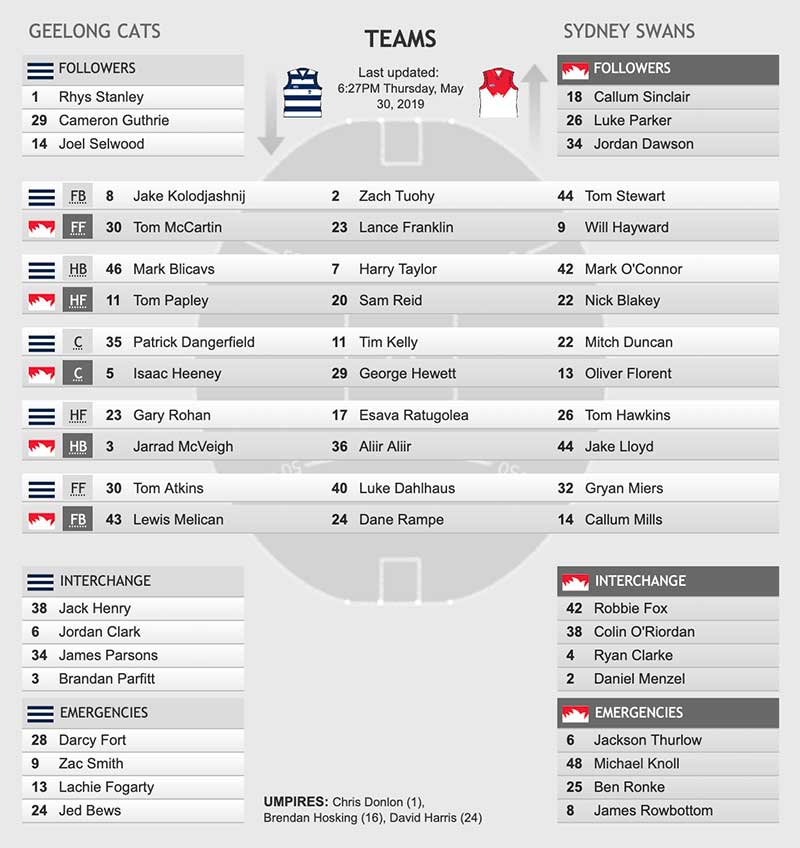 The Swans have been dealt a significant blow ahead of their Round 11 clash against Geelong at GMHBA stadium,…