Sydney welcomes back the biggest name in AFL, superstar forward Lance Franklin for their Round 2 clash against the Crows at the SCG.

Playing his first game in 581 days since the 45-point win against St Kilda in Round 23, 2019, Sydney Swans coach John Longmire expects Franklin to play his role.

"We know he hasn't played for a while but we want him to play his role for our team and help us against a team which played really well last week, we know Adelaide are a really good challenge for us."

It's a massive inclusion for the Swans, on the back of a dominating 31-point win against the Lions, having lead by as much as 50 points with 6 minutes remaining in the last quarter.

Both teams finished 2020 in the bottom 4 of the ladder and took advantage of their excellent draft positions. Adelaide recruited Riley Thilthorpe, while Sydney struck gold, oil and a rich vein of diamonds, all at the same time, with Logan McDonald, Braedan Campbell and Errol Gulden.

Gulden (3 goals, 10 marks) was a star in Sydney's stunning Round 1 win, booting 3 goals for the match, including two in a stunning burst in the third quarter, setting up another.

When finally given an opportunity to play full-time midfield, Callum Mills (29 disposals, 2 goals) carved up the hapless Lions who had no answer.

Adelaide's stocks are already threadbare thin, forced to field a significantly inexperienced side against Geelong in Round 1, while sorely missing Brad Couch and Daniel Talia.

Despite suffering numerous injuries in the first half, Tex Walker's 5 goals was enough to secure an outstanding upset win, leading by 40 points midway through the third quarter.

Rory Laird was superb in midfield (27 disposals, 6 tackles), and Adelaide's underrated forward line made a huge contribution with 8 goals.

Tex Walker vs Dane Rampe
Former captain Tex Walker's 5-goal effort against the Cats was the deciding factor in an exciting match. After two barren and inconsistent years, the threat of a return to previous form will no doubt have the Swans on edge. Dane Rampe often has the job, and will rely on support from Tom McCartin and Sam Reid filling the pocket. If there's anyone that can get the job done, it's Dane Rampe.

Errol Gulden vs Andrew McPherson
Errol Gulden put on a masterclass in a debut for the ages, collecting 7 AFLCA votes, the Round 1 Rising Star nomination and undoubtedly 2 Brownlow votes. Showing composure belying his age and experience, he put the Lions to the sword, taking 10 marks, booting 3 goals and setting up another 3. McPherson plays as a small intercept defender, averaging 5 intercept possessions per game. If McPherson can't put the clamps on 2nd gamer Gulden, it could get ugly for the Adelaide defence.

Isaac Heeney vs Tom Doedee
Impressive intercept defender Tom Doedee has played well against the Swans since his debut, including a near best afield effort in Round 5, 2018. The ground suits Adelaide's defensive style and Doedee thrives when he can set up behind the ball. This week, his match-up is anything but orthodox, taking on Heeney fresh off a 3-goal haul against the Lions. Doedee will have his work cut out, with extra responsibility thrust upon him from Kelly's absence.

THE SIX POINTS:
1: The Swans kicking in Round 1 was elite with an overall 76% disposal efficiency. Jake Lloyd in particular went at 92% from 24 disposals, Braeden Campbell on debut with 92% from 12 disposals, Callum Mills at 86% from 29 disposals, Errol Gulden on debut with 84% from 19 disposals and ruckman Tom Hickey outstanding with 83% from 23 disposals. Adelaide went at 71% overall with Tom Lynch the only player above 90% from 17 disposals.

2: Adelaide's threadbare thin defensive stocks will be stretched to the absolute maximum, facing one of the most formidable forward lines in the AFL with Lance Franklin, Tom Papley, Sam Reid, Isaac Heeney and Errol Gulden. It's a hugely experienced forward line capable of big goals, against an undermanned and inexperienced defence.

3: Both teams faded late in their matches, the Crows allowing the Cats to come within two goals, while Brisbane kicked 3 goals in the last 6 minutes. Whichever team is leading at the last change will be confident they can hang on for the win.

6: Sydney recorded a phenomenal 23 marks inside 50, 10 more than 7th ranked Adelaide Crows with 13. Another result like that and Adelaide's undersized defence will do little to hold back the red mist.

IT’S A BIG WEEK FOR…
Lance Franklin is playing his first game since Round 23, 2019. Groin surgery, knee surgery, more groin, hamstring, knee and calf injuries have held back the superstar. Having played just 29 games since the semi-final loss to Geelong 2017, the Swans are hopeful that he can just get through the game unscathed. Goals and a decent performance is a bonus, but can look forward to defender Daniel Talia watching from the sidelines. 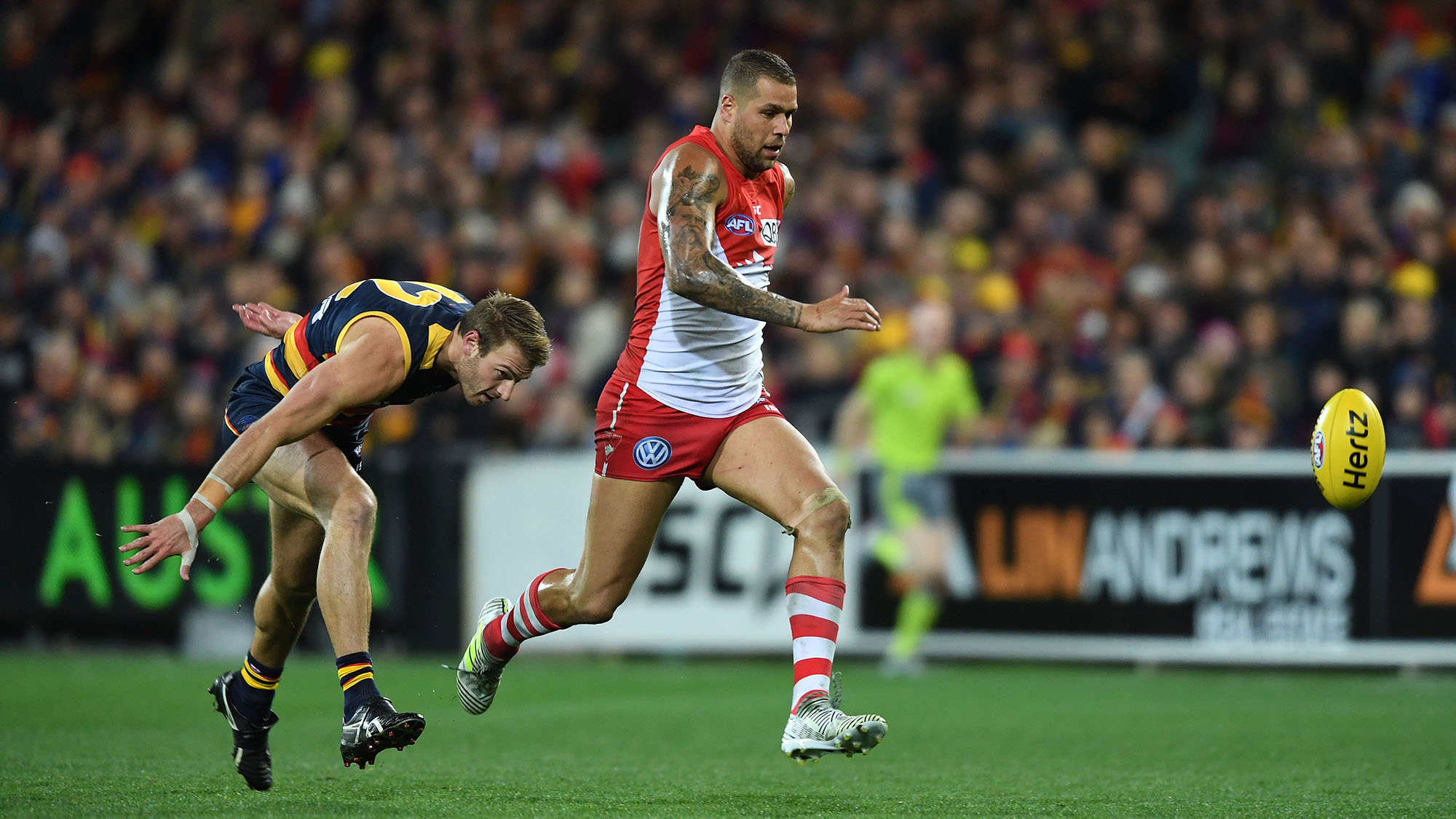 Sydney's youth put on a masterclass of football at the SCG on Saturday afternoon, in a comfortable 33-point win…