For the second time this season, the Sydney Swans welcomes back the biggest name in AFL, superstar forward Lance Franklin, for their Round 4 clash against the Bombers at the SCG on Thursday night.

After kicking three goals in the Swans' 33-point win against Adelaide in Round 2, Franklin trained strongly and firmed for selection early this week.

John Longmire said it was fantastic to have the spearhead back in the team.

"He trained today and he's been pulling up well," Longmire said.

"His program was that he trained last week really hard and trained again Saturday, trained today and then hopefully he pulls up well and be ready to go."

It was just the Bomber's luck that Franklin, having been rested for the Swans' Round 3 win against the reigning premiers, returns to play for the Swans in Thursday night's blockbuster clash.

Despite enjoying more success against the Bombers while playing for Hawthorn, than for Sydney, Franklin still remains a focus and a danger for the Bombers, even at 34.

The Swans to their credit, haven't been overly reliant on the forward so far in 2021, spreading the load across their entire forward line.

Emerging forward Sam Wicks, who kicked 3 goals in a near-best-on-ground performance last Saturday, was Sydney's most targeted forward, while Hayden McLean was their second most targeted player inside 50.

Their start to the season has been nothing short of astonishing, completely subverting expectations and triggering a rapid reevaluation of the teams' prospects.

Knocking off reigning premiers Richmond was another notch to their belt, after dominating the Brisbane Lions in an emphatic opening-round message to the rest of the competition and dispatching the Adelaide Crows with relative ease.

As recently as Monday, Jonathon Brown and Cameron Mooney predicted the Swans to make the Grand Final, with fellow pundits Gerald Healy and David King claiming that the Swans stats reflect that of a top-4 side, leading to comparisons of the 1993 Baby Bombers.

Cale Hooker, most famous for his chase of Lance Franklin in his 2010 goal of the year, booted five goals against St Kilda on Saturday and won't renew hostilities with Lance, Dons' coach Ben Rutten said.

“He will stay forward,” Rutten said of Hooker.

“He’s been hitting the scoreboard well but the most pleasing thing with Cale’s game is he’s been competing really hard and he’s been connecting with his forwards. He didn’t train there all pre-season so he’s still learning a little bit of some timing stuff and positioning, but he’s getting better all the time.”

“I think what we’re seeing more and more with Sydney, and most teams, is they’re not a one-dimensional footy club. They’re not solely reliant on Buddy playing for them to be a good team, so we’ll certainly pay the respect that we need to for Buddy but understand there’s a bigger job at hand.”

Captain Dyson Heppell returns to the side, having missed consecutive matches with a back complaint, tempering the loss of Jye Caldwell, Dylan Shiel, and Sam Draper.

Darcy Parish vs Callum Mills
Darcy Parish and Callum Mills are both rising star midfielders, having served their AFL apprenticeships in defence. Both were hugely impactful in their sides' respective wins, both arguably best on the ground. Parish has had a bigger impact on the centre square clearances and is one of the key reasons why Essendon is ranked second for centre clearances.

Jake Stringer vs Dane Rampe
Jake Stringer's return to form couldn't have been better timed for the Bombers, who were staring down the barrel of a winless start to the season. Losing weight, gaining fitness, and a new lease on life, the premiership forward looks to have returned to his damaging best. Dane Rampe is still at the top of his game and will have to do his utmost to quell the dangerous barometer once he enters his domain.

Lance Franklin vs Brandon Zerk-Thatcher
There are no more daunting tasks than taking on a rampaging Lance Franklin. In Essendon's case, Franklin's neither rampaging nor feasting. But don't poke the sleeping Lion or he's likely to rip shreds. 3 goals in his return game from almost two seasons out of footy proved that he's still more than capable of mixing it with the best.

THE SIX POINTS:
1: The Swans continue to dominate the scoring ledger, ranked first for goals for the second consecutive week. For years under John Longmire, the Swans struggled to score more than 100 points a dozen times a season, but now they've equaled their best scoring start to a season since 2001, averaging 121 points per game.

2: The Swans have stars on every line, having claimed the first three nominations for the NAB AFL Rising Star award. Tall forward Logan McDonald is the next player tipped to be nominated for the award, and an explosive game from him on Thursday night could make it a magical four nominations from the opening four matches.

4: The Bombers have to expect the pressure on Thursday night. While they've been dominant in clearances this season, ranked second for centre clearances, the Swans have simply been manic in pressuring the ball carrier, ranked first for post-clearance pressure. Gerald Healy called it the Red and White Tsunami on The Couch on Monday night.

5: The Bombers' tackling and defensive pressure sees them ranked in the top 6 of teams for tackles and one-percenters, while the Swans are ranked 15th and 11th respectively, a sign of the way the teams play.

6: Despite the Swans' structured and precise method of attack, they're one of the lower ball-using teams in the league, ranked 10th for uncontested possessions, while the Bombers are ranked 3rd. The Bombers' tendency to overuse the ball under pressure saw them cough up the ball multiple times against Hawthorn and Port Adelaide.

IT’S A BIG WEEK FOR…
Nick Blakey has been playing a mix of roles for the Swans, and looks set to continue playing his half-back flank/wing role. With James Rowbottom, James Bell, Will Hayward, and Dylan Stephens waiting in the wings, the young midfielder will need to ensure that he lifts to keep his place in the side. 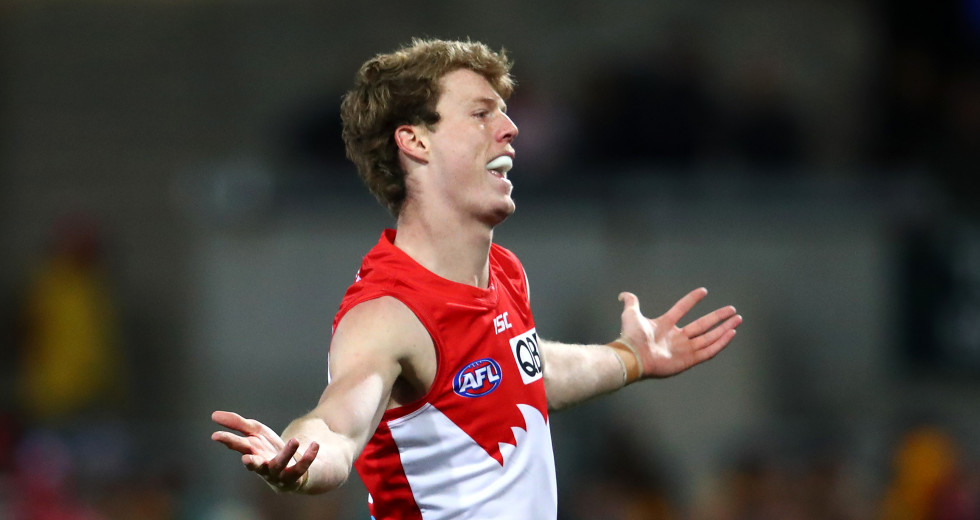