The Swans have made one change for their crucial (every game from here on out is crucial) clash against the Tigers on Saturday afternoon, opting for pace by bringing in recent flu survivor Rohan for the healthy Melican.

While Melican might feel hard done by, spare a second to consider just how hard his game may have been on the weekend, facing off against Richmond's small forward line.

It's certainly prompted a re-think from the coaching staff, forcing them to make a tactical decision in light of their goal scoring potential, hoping that Rohan can replicate his 4 goal effort from their last encounter, balancing out the "cheque book".

Rohan's addition adds extra pace to the playing group, and even though he's been named as a forward for this match, it's possible that he'll spend a bit of time in the backline, like he did against the Hawks.

"We look at the opposition this week, particularly Richmond, they're quite different in their forward setup," Longmire said in this week's Centrum Team Selection.

"They've got a lot of smalls and we wanted to make sure we had a suitable variance in our team to cover those smalls.

"(Lewis) is a bit unlucky but I'm sure he'll be back in the team pretty shortly.

"Gary had a good hit out so it's good to have him back in the team."

Despite a powerful performance in the Swans reserve 30 goal win last Saturday, Kurt Tippett finds himself stuck there for the time being, with both Tom Harley and John Longmire declaring expectations making no secret of what's expected of him.

"Kurt will play when we think he can help us win, like our other two ruckmen and like every other player in the team," Longmire said.

"He just has to work on a few things and make sure he has a real presence in the air and on the ground.

"It's pretty basic. He certainly improved in those areas last week and I'm sure he will continue to improve, whether that's this week in the seniors or not.

"There's nothing wrong with his attitude. His attitude is always really good."

A series of setbacks for the big man has hampered his season, like his time with the Swans, playing just 70 games over five seasons.

Having overcome ankle and hip injuries, Longmire is confident that Kurt Tippett won't be making a new home in the NEAFL, although his position in the seniors is far from guaranteed.

"He's certainly been able to put the training program together. We're confident he'll be able to be in his best form pretty quickly.

"We're confident he will be back in the senior team pretty shortly." 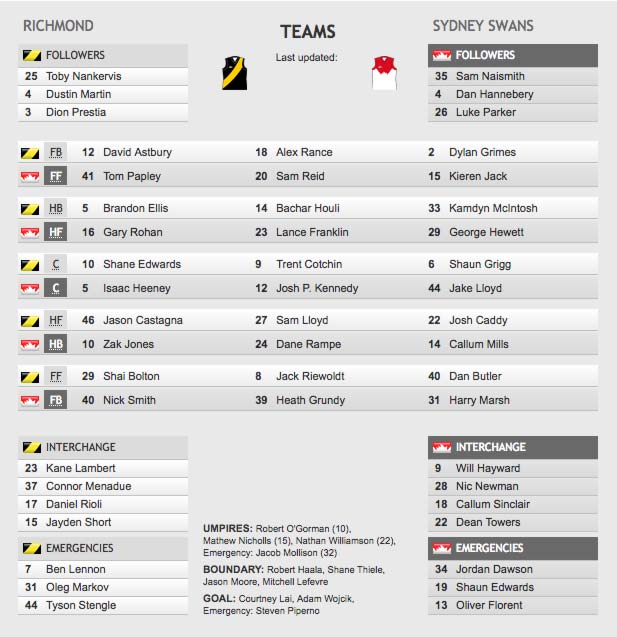 In an enthralling battle between two top teams, the Swans scrapped their way to victory, fighting back from a…

SwansCast Episode 3 - The eye of the Tiger

Good afternoon all and welcome to another fantastic post-win week at The Swans Blog. How good was last Thursday…