Before berating a loyal supporter for dragging up ancient, painful history, let me begin by saying that in 1994, I was an impartial observer of the Sydney Swans.

I had to be, as a sports journalist at The Sydney Morning Herald and designated AFL reporter that year. It wasn’t a job many aspired to the in the SMH newsroom, I can assure you.

The Swans had plummeted to their lowest depths post Doc Edelsten. With no money, a bail-out from the AFL keeping the club alive, and a dire 26-game losing streak in 1992-93, it was enough to test even the most rusted on Bloods supporter let alone a Sydney newspaper sports department wedded happily to the two rugby codes.

You may remember the times, AFL coverage in the country’s largest and most respected broadsheet, consisted of a 400-word story buried near the comics maybe twice a week.

The match day attendances could barely be described as crowds. Every member of the press box used to laugh out loud when the official numbers were posted on the scoreboard, given there were entire bays empty. You needed binoculars to spot the spectator.

I was from Perth and followed the mighty South Fremantle Bulldogs in the WAFL, so I had grown up with footy – and the red and white – but was only marginally excited to be covering the sport I loved in Sydney.

It was another tough year for the Swans in 1994 - albeit more positive than the previous few seasons - with renowned coach Ron Barassi at the helm and a champion player, Paul Kelly, captaining the team.

In round seven, the Swans took on St Kilda with their fearsome goal-kicking machine Tony Lockett in an angry mood. He wasn’t, you could say, overly thrilled about a well-publicised incident the previous season when a pig with the word ‘Plugger’ inked on its side ran rampant on the SCG turf.

So when he rammed his forearm into the face of Sydney’s Peter Caven running back with the flight of the ball, smashing the defender’s nose into about 50 pieces and knocking him out, the Swans faithful were rightly outraged.

It was a dreadful act which resulted in Caven missing 12 weeks of football, with a compound fracture of the nose, and Lockett himself received an eight-week ‘holiday’ from the tribunal.

But not before he kicked 11 goals that day and, even worse, singlehandedly beat the Swans, who had an eight-goal lead halfway through the final quarter.

With four goals in the final few minutes and a massive ‘up yours’ fist pump to the Sydney members roundly booing his every move, Lockett and the Saints rode a wave of momentum to record an incredible single point victory. 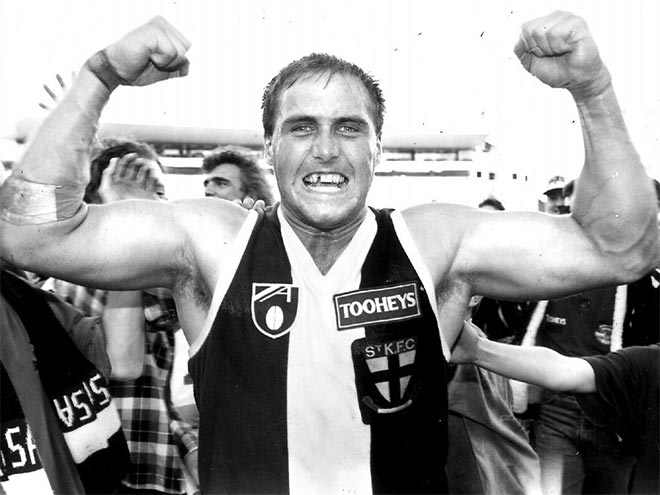 Those at the game were stunned. Even by the Swans’ standard of losses at the time, this was a shocker. I wrote a front page story for the Herald, describing the miserable defeat snatched from the jaws of victory, and the Plugger hit.

It was a four-win season for the Swans and as we all know, only a few months later in 1995, Lockett was running out onto the SCG in red and white, to the cheers of some and the confusion of others.

With the passage of time and the unqualified success of his move north, it would be fair to say most Lockett critics became fans. When he booted that famous preliminary final point against Essendon after the siren to put the Swans into the grand final, Plugger, the former Saint, was elevated to actual saint status in Sydney. 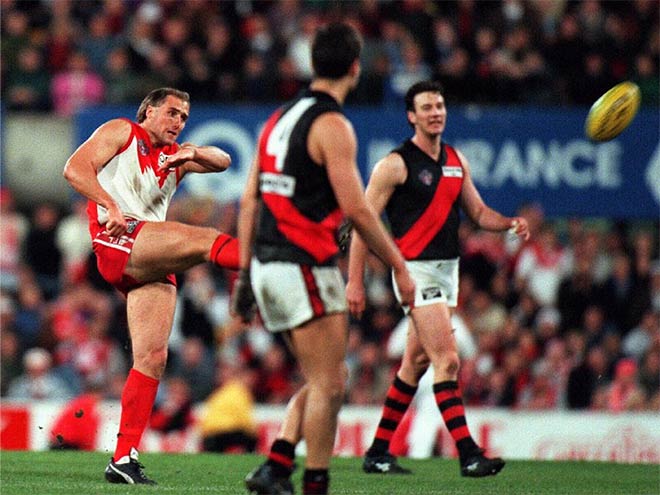 After his retirement in 1999 we saw little of Lockett, although memorably, for a 115kg full-forward who rarely ventured further than the 50m arc on a footy field, he ran in The Sydney Morning Herald Half Marathon – that’s 21.1km - in 2000 to raise money for the Australian Paralympics team. He said it was the hardest thing he’d ever done. This from a football supremo who holds the AFL goalkicking record of 1360 majors!

I’m not a Tony Lockett fan, although I acknowledge his playing feats and popularity among many Swans supporters. To this day I remain revolted by his dangerous attack on Peter Caven and – to the best of my knowledge – his lack of public apology for it.

However, one thing Lockett brought with him to Sydney was a full-forward’s star power. He also set the tone for future club recruits.

And we’ve had a few beauties.

Among my favourites: Paul Roos (intelligent, excellent mark, the coach who led us to that drought-breaking premiership in 2005), Nick Davis (2005 semi-final v Geelong – greatest individual, single quarter performance I’ve seen), Ted Richards (backbone of the Swans defence and a very amusing personality) and Josh Kennedy (the midfielder built for finals and a consistently top shelf performer, having finished top three in the Bob Skilton Medal for seven straight years.)

You may by now have noticed a shift in this story’s tone, from unbiased, neutral commentary to personal opinion and open admiration for all that is red and white.

It could have been the way Paul Kelly played and captained, or the momentum the club was building, or the sheer excitement of that man Lockett’s preliminary final point, but I was definitely hooked.

After leaving full-time work at the Herald sports department in 1997, it was liberating to go to matches and scream for my team.

This was made somewhat more difficult when my husband John and I, and our two young children moved back to Perth in 2004, but it hasn’t been a deterrent.

Every year since then I’ve flown to Sydney, Melbourne and Adelaide to watch matches, and attended most Swans games in Perth. Of course, it was a fine year to live in Western Australia in 2005, but not so great the following year.

I watched the 2012 winning grand final on TV, going nuts with everyone else when Nick Malceski kicked the winning goal, and was among the stunned part of the MCG crowd at the 2014 and 2016 losing deciders.

John jokes that I made the mistake of wearing the ‘scarf of death’ and ‘shirt of shame’ (ie. my Swans scarf and guernsey) to those games, which negatively affected the outcome.

Sitting with my sister Laurel and her fellow cheer squad members, they were certainly sobering experiences – quite literally.

But I have no complaints. As a Swans supporter over the last 20 years, we have been blessed with a club which has won premierships, made the finals most years, produced unbelievable champions (Adam Goodes!), outstanding captains (Stuart Maxfield, Brett Kirk) and I think most satisfyingly, a strong culture of team-before-self and accountability on and off the field.

Which brings us to 2017 - a rotten start, followed by a startling run of wins that will likely see Sydney in the finals once again.

Western Bulldogs showed last year the premiership could be won from seventh position. The Swans are out to make history too, and if they do, I’ll be there at the MCG to share in the joy.

The Swans and Crows came together to put on another classic, with the Swans prevailing by three points on…