This weekend, the best two teams for this season will walk onto the MCG. There they will stand, one team linked in solidarity, the other standing in a powerful display of fierce confidence – come and get us Tigers, we are ready!

Like the Gladiators of old, a battle will be fought in our own colosseum, with one team to be the victor. And there on that field, the champions will hold aloft that shiny cup, while their team’s colours are rained down on them from above, amidst the cheers of their adoring fans.

But before this happens, there will be a few minutes where old warriors will be seen on that arena one more time. Champions of the game and lesser knowns will be paid one more moment of respect, by friend and foe alike, as they are wheeled around in their chariots. One final time they will step foot on that field of dreams before they retire into the afterlife.

And like last year I will turn away for a few minutes in disgust as I am reminded that a champion of our own was denied.

This week more than any, we are reminded of the past deeds of our champions. It was during the late hours I found myself searching for those great red and white moments again, when I am reminded of our own champion’s end.

After being mesmerised for the umpteenth time by Leo Barry’s mark, Nick Davis who came to “Savis”, Malceski’s snap, and Plugger’s point, “The Schneiderman” in full flight, Jetta speeding along the wing rolled past when the video ended. It paused briefly as it loaded the next piece of cinema. Black screen came to life again and there by chance, staring back at me was my champion.

And there I sat, fixated on my champion’s eloquent words, his compassion on show as he bared his soul on how racism affects him and his cousins. How the way forward was education and how the AFL was helping. And in a moment of almost prophetic greatness the man interviewing the champion asks “What’s next” and the champion replies, “Another premiership would be nice”. 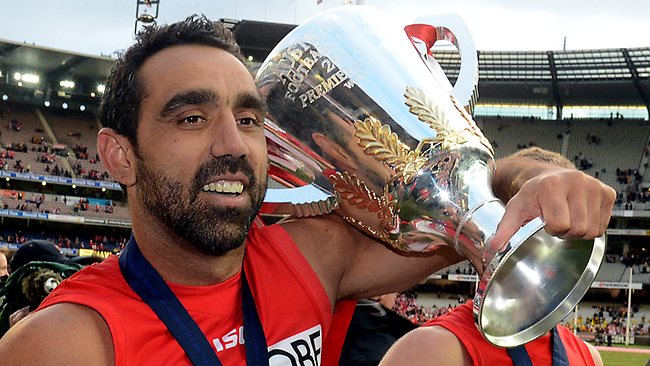 At first I marvelled at this; the timing is impeccable, as the champion would be proven right three months later when he held aloft that same shiny cup, while the red and white confetti rained down to the screams his adoring fans. But my marvel quickly turned to bewilderment.

My champion’s words were more prophetic at the time than anyone would realise. Three short years later, a social debate raged as Australia again showed its ability to trivialise, and diminish complex social situations to individual sound bites and slogans.

Unlike 2012 when the AFL was praised by my champion for tackling the issue of racism head on, the league stayed quiet. Meaningful discussion was drowned out by the hysterical boos of hostile crowds, and the slander of right wing columnists.

At first the anger seemed to waiver as the crowds moved into something else, but the discourse became louder again as sharks circled. Blood was in the water, sensational headlines and sound grabs had to be found. Hatred raged again, and like children resenting being told what to do, they turned on the victim one last time - “It’s your fault because you’re a sook”.

As the humiliation continued, the scars became deeper, the champion - bloodied and bruised - turned away from the game. Battered and broken, he walked from the field without a sound and there for a moment, he needed a champion of his own.

“Cometh the moment, cometh the Champion”

The moment had come, the AFL failed and the Champion is sadly, no more.

Swans in the race for want-away Demon Jack Watts?