In their storied pasts, the Swans and Eagles shared one of the closest and most fiercely contested rivalries in modern football.

Nay the Kennett curse, vexing the Cats after Hawthorn's 2008 Grand Final upset win, the Swans and Eagles steeped themselves in footy folklore with a series of tightly contested matches across 3 finals series and two grand finals.

To tell the tale, one must start at the beginning, the 2004 AFL Eliminiation Final at ANZ Stadium between the two sides.

In one of the more bizarre games of football, the weather gods did their best to force the hands of the AFL and abandon the match at half time. Torrential rain, atrocious conditions and lightning strikes threatened the safety of the players and spectators.

The Swans capitalised on the conditions and at half-time held a crucial 30 point lead, while the players sat in the sheds until the weather let up and play resumed.

Their next two meetings were anything but close, with the Swans copping a hiding at Subiaco, before kicking 8 goals to 3 in the second-half in the reverse fixture to win by 21 points.

Incredibly, the next 6 games would be decided by just 13 points, with two of the greatest grand finals and qualifying final games of all time.

It's just one of several AFL records the teams share over the run of games 6 between 2005 and 2007, including:

The Eagles held sway in their 2005 qualifying final and the Swans could do little to hold back the Eagles as they surged in the last quarter.

A last quarter free kick against Barry soured the result with the umpires later admitting it was a mistake, but little consolidation for the Swans, as the Eagles kicked a match-winning goal. 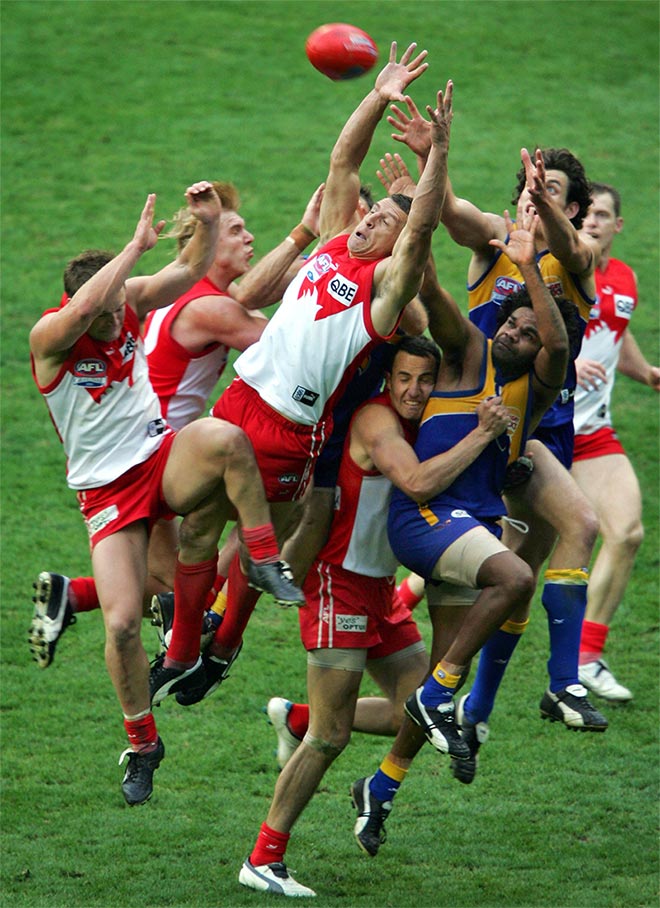 From Villain to hero, forever etched into football folklore as one of the greatest moments in AFL grand final history, and a Swans legend for life.

Such as the noise at the ground, he didn't even know the siren had sounded as he backed up from the mark to take his kick, with his players swarming him and Buchanan pulling him to the ground.

Remarkably the next fixture was won by the Eagles by just 2 points. The Swans lead for most of the match, but just couldn't hold back Judd and enigmatic forward Wirrpanda, having one of his career best games.

The qualifying final was another gift from the football gods in a see-sawing battle that saw the Swans surge across the line in the last quarter.

The Eagles held a narrow 5 point lead late in the game but the Swans kept pushing and found Michael O'Loughlin on his own in the forward line, sprinting in and banging it over the fence, leaving us with one of the most iconic photographs of Phil Hillyard's career.

The grand final was another epic battle with the Eagles leading for most of the game despite the Swans charging late in the last quarter.

Goodes' first goal on the fourth quarter, just seconds in, sounded the Swans charge, but a late Daniel Chick smother and Hunter goal put the Eagles 7 points up, while Swans forward Ted Richards was dragged down in the forward line. He would later tell us on the SwansCast that he felt concussed after the incident.

With the ball deep in the Swans forward line, the siren sounded to give the Eagles their first premiership since 1994.

Controversy followed the match with umpires coming under scrutiny for consistency and officiating, as well as reversing a crucial Barry Hall goal.

More than ten years on, the match is still shrouded in controversy, with the Eagles rampant drug use coming to the fore in the following 12 months, through public revelations of Ben Cousins, Daniel Chick, Michael Gardiner, Daniel Kerr, Chad Fletcher almost dying in Las Vegas and the controversial departure of Chris Judd.

Remarkably the qualifying final and grand final were decided not only by 1 point, but with the same scores in reverse, with the victors scoring 85-to-84.

The eagerly anticipated 2007 Round 1 Grand Final replay at Stadium Australia signalled a turn in fortunes for both teams.

The Eagles dominated the Swans in the first half and it looked like as if the Swans had teetered right over the edge, with Judd and Kerr having a day out.

A rocket at half time and a fierce second half performance brought the game back from the abyss, and it took a monumental tackle by Daniel Kerr on Jarrad McVeigh in the dying moments of the last quarter to prevent a Swans win.

The Eagles would go on to win their reverse clash in Round 16 with Ben Cousins making his comeback from drug rehab with a standout performance, collecting 38 disposals and having the football on a string.

Despite a closely fought first half, the Eagles held sway in the second half, even with the Swans closing the gap with a spirited comeback, kicking six goals to three in the final quarter.

Neither side had a finals campaign to remember, the Swans limping into 7th and ultimately falling well short against the Pies, marking one of their lowest points since the turn of the century, while the Eagles would go on to become the first team to exit the finals, losing both of their finals.

Swans have since dominated the contests between the sides, losing just twice in 11 games since the start of 2008.

Fortunes between the sides couldn't be much more different, with the Swans missing out on finals once and playing in three grand finals, while the Eagles slipped far, won a spoon and played the 2015 Grand Final.

It has been a gripping rivalry between the teams, and with the first match between the two teams at the brand new Perth Stadium on Sunday afternoon, there's hope that rivalries old can be renewed.

But for Swans fans, no repeat of their 2017 start, a win and and a clean bill of health will be all they want, while the Eagles lurch from into the season and roll the dice on half-fit players.

TEAM: Veterans return to the fold as Swans fly west