The Swans have welcomed back veterans Jarrad McVeigh and Heath Grundy for the Swans and Eagles' historic AFL clash at the brand new Optus Stadium in Perth.

Traveling to Perth with a 26-player squad, the Swans have opted for experienced heads over youthful exuberance, with Jarrad McVeigh and Heath Grundy slotting straight back into the side.

The premiership players endured an interrupted pre-season, with McVeigh injuring his calf on the eve of the JLT series, and Heath Grundy recovering from a calf complaint, playing in the previous two NEAFL practice matches.

Swans star midfielder and vice-captain Dan Hannebery was close to making the team, but was unable to prove his fitness during Thursday's main session.

Longmire was hopeful that he could make it, but is non-plussed with his absence, looking forward to his return to the side against Port Adelaide in Round 2.

“Hannebery’s been training well and it was a long discussion but we felt with the combination of McVeigh and Grundy coming back in, he was probably another week away,” Longmire said.

“Hannebery was a little bit behind McVeigh in his preparation but he won’t be far away. He’s a quality player – we know that, but we were wanting to give him another couple of training sessions before we played him.”

Callum Sinclair returns to the side, taking on former team mate Nic Naitanui alongside 50-gamer Dean Towers, in a pivotal battle for midfield dominance.

Enigmatic forward Gary Rohan has been omitted from the team for family reasons.

Jordan Foote, Dan Robinson, Harry Marsh and Will Hayward have been named as emergencies, with Oliver Florent playing his first game since Round 16, 2017. 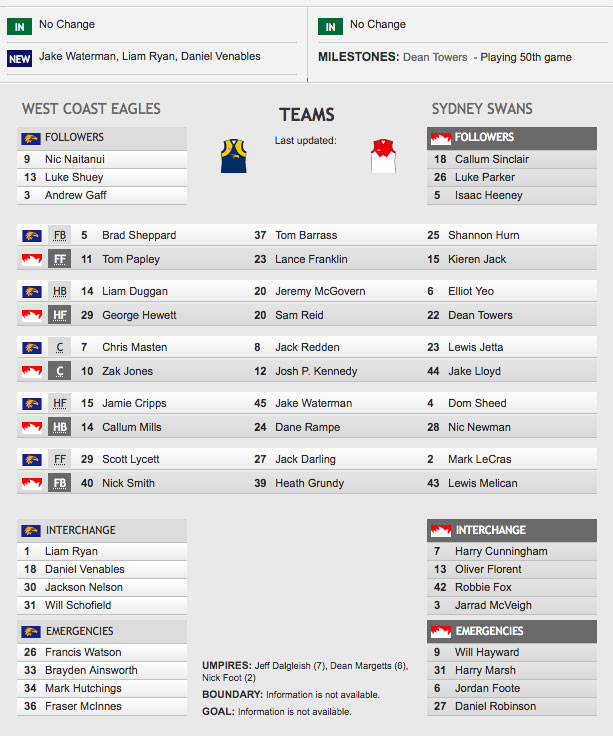 Over to you Chief

Little did Callum Sinclair know towards the end of last season, that 2018 would prove to be a career…

In their storied pasts, the Swans and Eagles shared one of the closest and most fiercely contested rivalries in…