It was a long wait to see the Swans back in action, waiting until the very last game of the opening Round. While the Eagles fans celebrated and applauded their new stadium, the Sydney Swans had other plans.

In the lead up to this fixture, both teams had question marks hanging over the selection table. For the Swans it was the fitness of key players McVeigh and Grundy, along with the absence of Swans big man Sam Naismith and nuggety midfielder Dan Hannebery.

The Eagles were without their powerhouse forward Josh Kennedy, along with the retirements of Brownlow medallists Sam Mitchell and Matthew Priddis. Not to mention the conjecture surrounding their champion Nic Naitanui’s return after more than a 18-months out of the game.

As the game unfolded on Sunday night, all the pre-match questions and concerns seemed to be put on hold, with the brilliance of Buddy Franklin taking over. He kicked 8 goals and won the game for the Swans off his own 10 million dollar left boot. 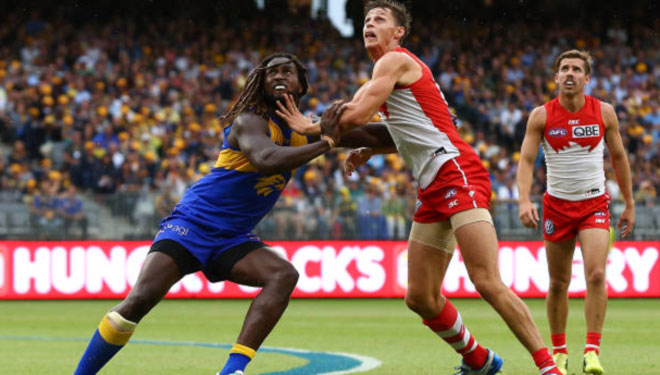 Rucks:
The most logical area of the game to start with was the battle in the ruck.

John Longmire and the coaching staff had decisions to make regarding the make-up of ruckman, with most people suggesting a combination of Sinclair, Reid and Towers.

However, with the late omission of Reid and with the dwindling ruck stocks continuing to plummet, the duties were left to Sinclair and Towers. The two certainly earned their pay check competing against Lycett and Nic Naitanui.

Unsurprisingly, the Swans were comprehensively beaten in the hit outs on the night - 66-to-17 - but still managed to win the clearances 47-to-38. Sinclair recorded 7 clearances - 5 of them centre - of his own to go with his 21 disposals.

The Swans will face an uphill battle in the ruck each week, and we showed against the Eagles that the fight in the middle can still be won. There was nothing to suggest that Callum Sinclair and Dean Towers can’t do the job, and I don’t see the inclusion of Cameron happening in the foreseeable future. 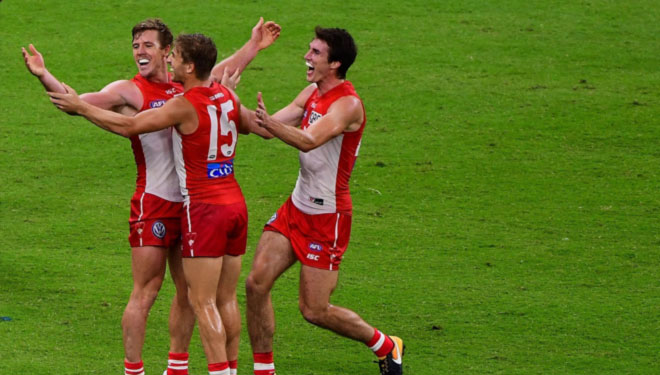 Midfield:
The importance of Luke Parker cannot be understated, with 32 disposals (18 contested), 7 clearances and a classy clutch sausage roll. Parker was the engine room for the Swans, he cracked in all night and won the ball at the coalface.

Parker combined beautifully with Heeney, particularly in the first half. Isaac provided a touch of class on the outside and was instrumental in our first half dominance.

Captain Josh Kennedy didn’t have his best night but was vital in the 4th quarter when the Swans were under siege. He still won 10 clearances for the game and kicked a critical goal in the last quarter; our Captain stood up when it counted most.

All in all, a solid midfield performance. They managed to read the ball off the Eagles ruckman all night, reflected in the clearance victory. This is going to be an essential skill all season, as the boys will likely lose the hit-out count every week. 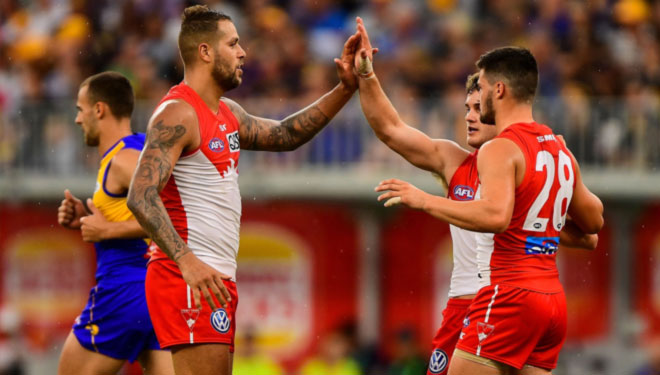 Forwards:
Buddy Franklin! Buddy brilliance! With 8 goals, 6 I50s, 21 disposals and 175 fantasy points, the man is the undisputed owner of the new Optus Stadium. West Coast Eagle's Josh Kennedy could do nothing but watch on from the stand as Buddy took control of the stadium that was suppose to belong to him.

We shouldn’t be surprised by this performance from Franklin, he's showed plenty of hunger and good form in the JLT Series pre-season games, picking up arguably two best on ground performances.

It was predominately a one man show up forward. It seemed as though the forward pressure was down from the lofty standard the Swans set last year. However, this was largely because of the open forward line that was left for Buddy to operate in, as well as the omissions of forwards Gary Rohan and Sam Reid.

The Eagles found it easier to rebound the ball from defence, especially once it was cleared from "Buddy's Paddock". The flip-side is that Franklin had plenty of opportunity one-out with his opponents, which we all know is where he is at his most damaging best (3rd quarter vs McGovern). Thera are pros and cons to this game style, but it will be something that the team will continue to test and balance risk and reward.

In the lead up to the season, I thought the scoring potential from the Swans midfield would be critical to elevate our game from last year. Most teams have already set a precedent this season of resting midfielders down forward with the likes of Fyfe, Martin and Ablett all being forward targets for considerable game time. The success of this was highlighted last year with the returns of Dangerfield and Martin, both kicking more than 30 goals.

It was surprising to see Horse not follow suit and use Luke Parker, Josh Kennedy and Heeney more in the forward line. Whether this was due to the focus on isolating Franklin, or due to their requirement to win contested ball and clearances in the middle, is yet to be determined.

I think this will be a point of discussion going forward in the season, and I strongly believe this will be a requirement for us this year if we want to push for another premiership. 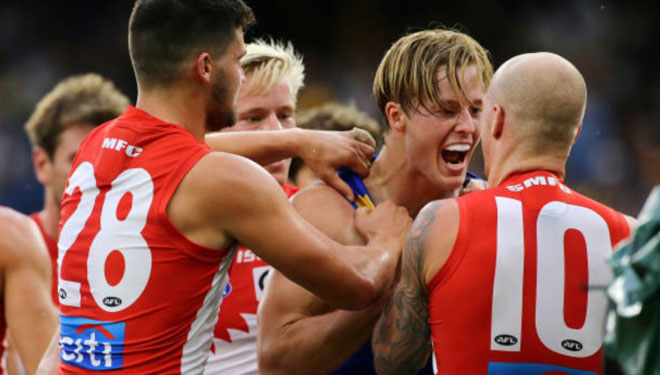 Defence:
In typical Swans fashion, we were happy conceding inside 50s, losing this statistic 60-52. The ability of Rampe, Smith and Grundy to withstand the punishment of inside 50s in 2017 was a sight to behold, all the while managing to be statistically the best defence in the competition, conceding an average of 75 points per game.

If Sunday night was any indication to go by, 2018 will be played in much the same way. Although a little sloppy at times, I think Grundy, Rampe and McVeigh will be better for the run and should be near 100% come the Port game this Sunday.

It was promising to see the ball use of McVeigh, running at over 90% disposal efficiency off little preparation, and he will only get better for it.

Lloyd had a fantastic start to the year with a game-high 8 rebound 50s, and 29 possessions at 80% efficiency. He was enormous in setting up our plays for the backline, and we will need performances like this week-in, week-out if we are to feature prominently this year.

A highlights package of Callum Mills’ game would show numerous tough marks, putting his body on the line and running back with the flight, none more so than his mark in front of Nic Naitanui. We just continue to see more and more of this guy showing his courage and toughness - it’s no mistake that he wears the famous number 14. 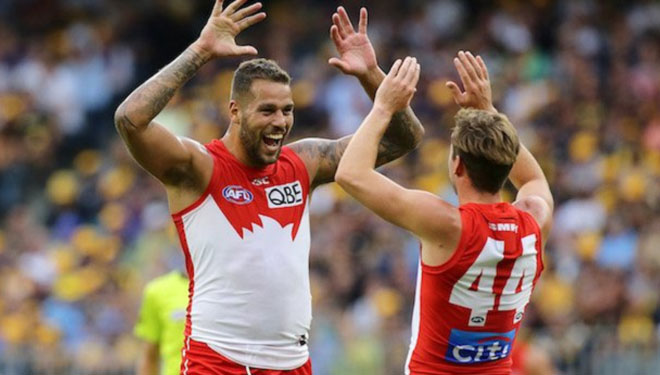 Impression:
It was a solid performance across the ground, and with more fitness and finesse, the game should have been over at half time. Sydney struggled to translate their dominance onto the score board in the second quarter, scoring five consecutive behinds before half-time, leading by just 26 points. This should easily have been a 40-point lead and game over.

It was encouraging to see the pressure levels at a high standard so early in the season. The players and coaching staff have clearly made that a focus in the lead up, and were rewarded in spades for it.

It was disappointing to see the Swans so easily scored against late in the 3rd quarter with 4 goals in less than 9 minutes. It is unlike Sydney to give up consecutive goals, especially in red time at a critical period within the game.

While this wasn't the greatest team performance we will see this year, but it certainly beats the start of 2017. With another game in the tank for Grundy and McVeigh, Hannebery and Reid set to return, we have a very good chance to beat the much-improved Port Adelaide Power next week at the SCG.

The Sydney Swans have received a boost ahead of their blockbuster clash against Port Adelaide on Easter Sunday, with…

Good evening all, it's another fabulous Swans week. Fresh off the impressive win at Perth Stadium - on the…