The Sydney Swans have received a boost ahead of their blockbuster clash against Port Adelaide on Easter Sunday, with forward Gary Rohan and vice-captain Dan Hannebery named in the team.

Nic Newman and Robbie Fox make way from the team, joining Jordan Foote and Ben Ronke as the emergencies.

Longmire said Ronke’s selection is a testament to his hard work.

“Ben’s a young player off our rookie list who’s been around for a couple of years and we’ve been really impressed with them,” Longmire said.

“He’s a great kid and has a great work ethic. Over the last few weeks he’s played midfield and forward as a really strong, hard pressure player. He loves to compete and is a great tackler so it’s good to see him get a look at it.”

Forward Sam Reid was unable to prove his fitness for the second week running and has not been named.

Hannebery has been named to play his first game of the season, overcoming injury concerns and pre-season set backs.

Longmire said that Hannebery has been pushing hard to selection for sometime now.

“He’s had a solid four weeks of pretty hard training now as far as football training and another four weeks prior to that with running, so he’s in good condition,” Longmire said.

“He played 60 to 70 minutes last week in our reserves and got through that really well so he’s ready to go.”

Gary Rohan missed last weeks' match as he stayed in Sydney for family reasons, but has been named to play his first game of the season. 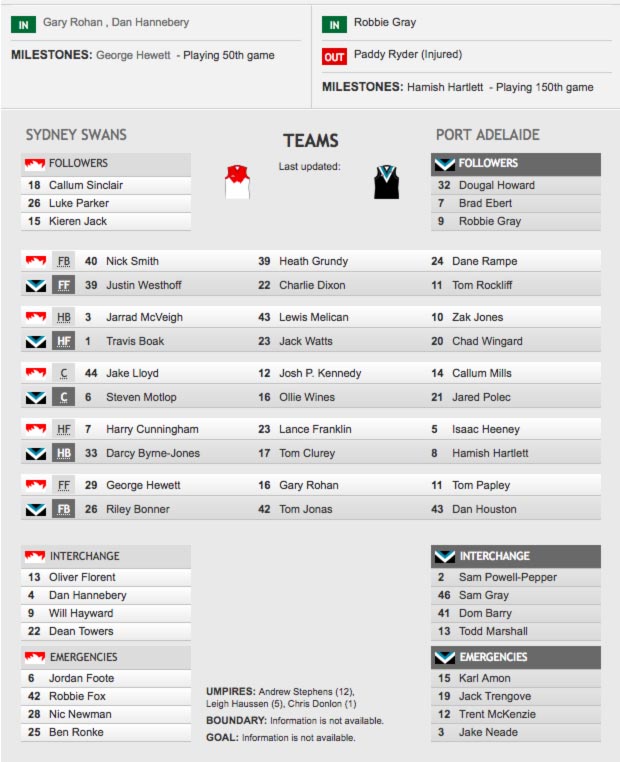 The Stats File: Swans own Perth Stadium for now

It was a long wait to see the Swans back in action, waiting until the very last game of…