The Sydney Swans take on premiership fancies Port Adelaide Power on Easter Sunday at the SCG in the penultimate match of Round 2.

The last time these teams met, Port Adelaide kicked off Sydney's horror start to season 2017 with a season-opening upset win.

This time around, Port will be facing a much better and fitter Sydney team, while Port travel without their game-breaking ruckman.

Sydney return to the SCG as victors having overcome a dogged West Coast outfit that was lead well by returning ruckman Nic Naitanui, while Port Adelaide thumped Fremantle at the Adelaide Oval.

Sydney's Lance Franklin torched the West Coast defence, his 8-goal haul his best rated game for the Swans, and will give the Power defence plenty of nightmares.

The visitors have their own star forwards that will keep the Swans defence on a knifes edge, with Jack Watts and Charlie Dixon much taller than their Sydney counterparts, and Justin Westhoff who can drift forward and back.

Jack Watts, Tom Rockliff and Stephen Motlop settled well into their new club last week, Watts amongst the best with 3 goals, while they welcome back star player Robbie Gray.

Gray's inclusion for Port Adelaide is crucial, given the absence of Paddy Ryder, and alongside Ollie Wines, Travis Boak, Brad Ebert and Sam Powell-Pepper, gives them the grunt and star-power to be able to match it with Sydney's best.

The Swans welcome back forward Gary Rohan and star midfielder Dan Hannebery, Rohan returning to the side and Hannebery from a calf injury.

KEY MATCHUPS:
Lance Franklin vs Tom Clurey
After watching Franklin's masterclass against the Eagles last weekend, the Port Adelaide defence would be shaking in their boots. The responsibility falls to Tom Clurey, but expect Westhoff and co. to swing back into defence to plug the gaps.

Luke Parker vs Robbie Gray
Both players are genuine stars of their teams and with Parker already in great form, should be good enough to get the job done.

Heath Grundy vs Charlie Dixon
Grundy gives away a lot of height, speed and weight in the contest, but is one of the best full backs in the league for a very good reason.

Dane Rampe vs Jack Watts
Watts was superb in Port Adelaide's victory last week, while Dane Rampe was scratchy at best in the Swans win out west. Dane will have his hands full when he takes on the athletic forward, who bagged 3 goals and will no doubt pick up 2 Brownlow votes for his efforts against Fremantle.

THE SIX POINTS:
1: The last time they met, Port Adelaide upset the Swans by 28 points at the SCG, kick-starting their horror 0-6 start.

3: Superstar forward Lance Franklin had his career-best game for the Swans last week, his 8-goal haul rated better than his 10-goal haul against Carlton in Round 23 last year.

4: Port Adelaide haven't won two games in a row against Sydney since 2002-2003, whereas the Swans have won 13 of the last 15 matches between the sides.

5: Paddy Ryder was influential in the ruck the last time these teams met with 28 hit-outs, while Sam Naismith racked up 33 hit-outs and 5 tackles. Both players will be absent through injury.

6: Lance Franklin kicked 4 goals and picked up the 3 Brownlow votes in Round 1 last year. He's already in ominous form, kicking 8 against the Eagles and favourite for the Coleman medal.

IT'S A BIG WEEK FOR...
Callum Sinclair - with Paddy Ryder missing, Sinclair must dominate the ruck against Dougal Howard and Justin Westhoff. Howard doesn't have a hit out in the AFL for over a year, with his previous best haul of 8 registered in Round 6, 2006. 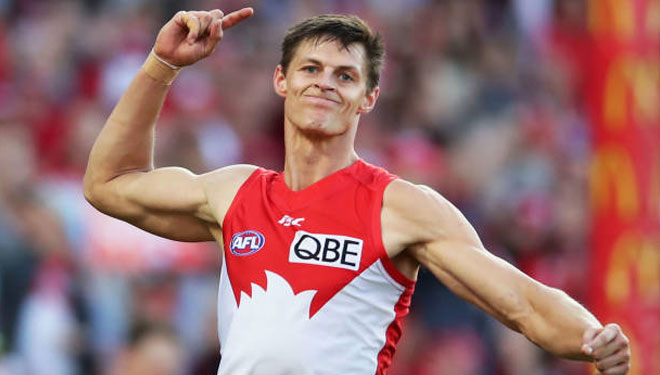 Today the Suns put the Blues to the sword at Etihad Stadium, leading from start to finish, running out…

The Sydney Swans have received a boost ahead of their blockbuster clash against Port Adelaide on Easter Sunday, with…