After posting significant wins in the opening round of the season, both Sydney teams found things more difficult in Round 2.

The Giants struggled to overcome a dogged Collingwood outfit, both teams reeling from two serious injuries sustained in the opening quarter of their clash, while the Swans were steam rolled by Port Adelaide in the second half.

The Swans dominated every aspect of their clash in the first half, but as senior coach John Longmire put it, they simply didn't capitalise.

The Giants have beaten the Swans just once from five attempts at the SCG, last year in round five when their cross-town rival was in the midst of a 0-6 start.

Despite the Swans leading the overall head-to-head record 9-4, the Giants have dominated the Swans in recent years with three straight wins between 2016 and 2017, including the 2016 qualifying final.

Greater Western Sydney were dealt another injury blow on the eve of the clash, with 2016 All Australian forward Toby Greene ruled out, while the Swans welcomed back 26-year-old forward Sam Reid.

Phil Davis, Adam Tomlinson and Jeremy Finlayson will need to be at their best to stop the champion forward, with Reid's inclusion adding much needed height to the Swans forward line.

The Giants have their own firepower for the Swans to worry about, with John Patton and Jeremy Cameron is great early season form.

Of immediate concern for the Swans will be rectifying their alarming second-half performance against Port Adelaide last week, allowing a significant amount of points conceded from turnovers.

Whitfield, Ward, Kelly and Shiel are already in great form and will provide stiff competition for the Swans midfield unit, so far brilliantly lead by Luke Parker.

KEY MATCHUPS:
Lance Franklin vs Phil Davis
The pivotal battle between one of the best full backs in the league and the best forward since Wayne Carey. Franklin got the better of Davis in Round 17 last season, booting 4 goals and picking up the 3 Brownlow votes.

Luke Parker vs Callan Ward
Luke Parker has been the Swans best midfielder of the season, brilliantly leading the engine room. With Scully set to miss most of the season with a broken ankle, it falls to Ward to lead the midfield.

Dane Rampe vs Jeremy Cameron
Another enthralling battle with both players getting the better of one another at various times. The last two times he's played the Swans he's torched Rampe, picking up 1 Brownlow vote in Round 5 2017 and kicking 4 goals in their 2016 Qualifying Final win.

Callum Sinclair vs Rory Lobb
The Swans ruckman was superb in the opening half, but comprehensively beaten by Charlie Dixon in the second-half. Rory Lobb had his colours lowered against Collingwood but will want to make amends. First use of the ball is critical for both teams.

THE SIX POINTS
1: The last time they met, Lance Franklin and Tom Papley kicked two goals each in the last quarter to lead the Swans to a 13 point victory.

2: Both teams have been strong in the contests in the first two rounds, averaging 16 centre clearances. The Swans have the edge, averaging 49.5 clearances per game compared to the Giants 39.

4: This is the 14th time the teams have played each other. Sydney leads the head-to-head 9-4, with the Giants winning 3 of the last 4.

5: This is only the second time the Giants have won their opening two games of the season, and they've never won their first three. Sydney hasn't lost consecutive games as the SCG since rounds three and five last season.

6: With 12 goals in the opening two rounds, Sydney Swans forward Lance Franklin has jumped to a career-high fourth on the AFL Player Ratings list.

IT'S A BIG WEEK FOR...
Sam Reid - his inclusion to the team adds much needed height and a second option inside 50. The Swans have been Buddy-centric in the opening two rounds, with the majority of their inside 50 entries directed at him. 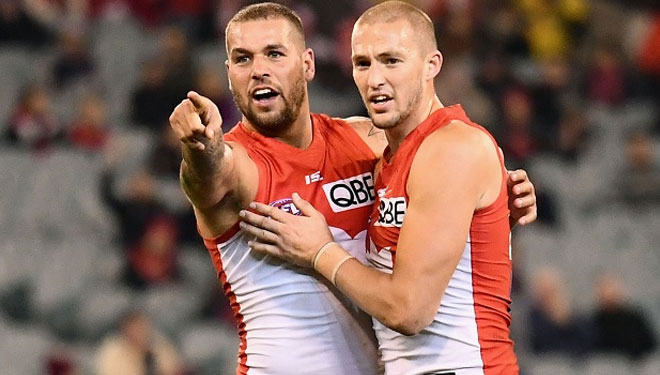 The Sydney Swans have received a significant boost ahead of Sydney Derby XIV, with Swans forward Sam Reid named…