The Sydney Swans have received a significant boost ahead of Sydney Derby XIV, with Swans forward Sam Reid named in the side for the first time in season 2018.

The 26-year-old has been sidelined with hamstring tightness since the first round of the season, and Swans coach John Longmire said that Reid would bring plenty to the clash.

“It’s good to have him in the team,” Longmire said.

“He had a really strong pre-season and has been back training for about a week and is looking really good. It’s great to have him back.”

The Giants will have to make do without their 2016 All Australian forward Toby Greene, who's been ruled out of the weekend's derby.

The 24-year-old has been battling hamstring tightness and the Giants have decided against risking him for the Sydney Derby.

Defender Robbie Fox has been omitted from the side having played in the opening two rounds, making way for Sam Reid.

Zak Jones has failed to prove his fitness after being a late withdrawal ahead of the Swans' Round 2 loss to Port Adelaide with a calf issue.

Coach John Longmire decided against risking him for the Derby, instead looking to the Round 4 clash against the Bulldogs at Etihad.

“We didn’t want to push him, we thought it was too much af a risk that calf,” Longmire said.

“Whilst it’s certainly getting better if we tried to train him and get him up for this week we could have put him at risk. We decided not to do that, hopefully he will be ok next week.” 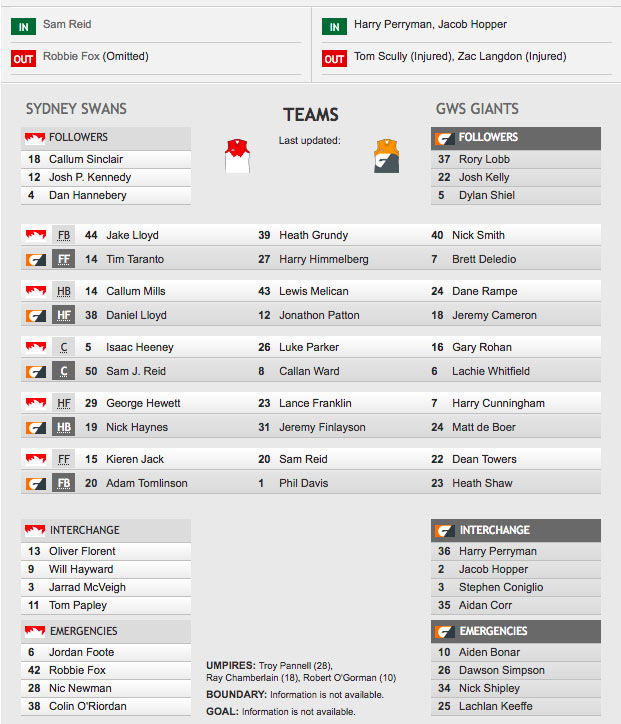 The Stats File: A tale of two halves

In a game that can only be described as a tale of two halves, the Swans fell short by…