The Swans have made three changes ahead of their crucial round 6 clash against the Cats at GMHBA Stadium on Saturday afternoon.

Superstar forward Lance Franklin will miss the clash with a bruised heel, first sustained against the Eagles in round 1, while midfielder Dan Hannebery will miss through a groin strain.

Exciting forward Ben Ronke makes his senior debut for the Swans, with coach John Longmire saying that his debut is highly deserved.

“He’s been working hard coming off our Rookie list and working really strongly as a small pressure forward,” Longmire said.

“He had a lot of injuries and didn’t get a good look at it but has had a good pre-season this year and his form has been really strong in the reserves, so it’s good to have him in the team.”

Ronke signed for the Swans in the 2017 Rookie Draft and honed his trade in the NEAFL last season, as the Swans powered through to the grand final.

Midfielder Dan Robinson returns to the side for his first game this season, while Robbie Fox returns to the team having played the opening two rounds.

Dean Towers suffered an eye injury today at training and has been forced to miss the match.

Longmire said that it was important that he was given time to properly recover.

“Unfortunately, he got a poke in the eye today,” Longmire said.

“Whilst he’s feeling okay, the bleeding in the eye means if he was to play this week he’d be putting his eye at risk and clearly we don’t want to do that.”

Nick Smith has been named to play his 50th consecutive game for the club. 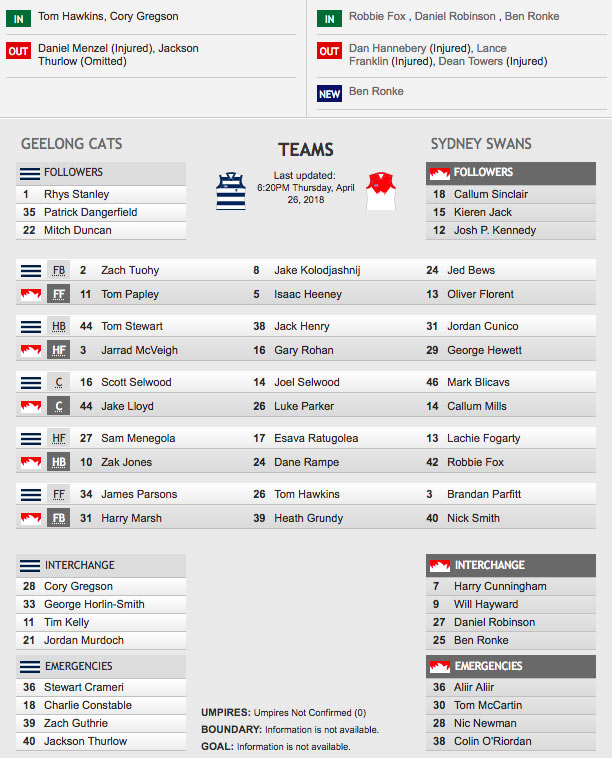 The injury-hit, Buddy-less Sydney Swans, travel south taking on the Geelong Cats in round 6 at the GMHBA Stadium.…

Parker: I feel the need, for speed!