The injury-hit, Buddy-less Sydney Swans, travel south taking on the Geelong Cats in round 6 at the GMHBA Stadium.

The Swans boast a record no other club in the competition can lay claim to – defeating the Cats in their last two visits to the venue, for an overall head-to-head record at the venue of three wins and three losses since round 23, 2011.

In last years’ win at Kardinia Park, Dan Hannebery starred for the Swans with 21 disposals and 2 goals, picking up 2 Brownlow votes, while Parker picked up the three Brownlow votes with a sumptuous performance.

Lance Franklin was largely ineffective for the visitors, while Dean Towers and Kurt Tippett struggled to impact the match.

Nic Newman and Sam Reid were among the Swans better players, Reid kicking two goals from 16-disposals and Newman one goal from 19-disposals.

Captain Josh Kennedy missed the match for the Swans last year but returns to the venue for the first time since 2016, while midfielder Dan Hannebery misses with a groin strain.

The Swans will have plenty to prove this weekend, after a disappointing outing against the Adelaide Crows last Friday night, as well as atoning for their semi-final loss to the Cats at the MCG last year, when they were thrashed by 59-points.

The Cats welcome back Tom Hawkins at the expense of goal kicking machine Daniel Menzel, while athletic utility Mark Blicavs’ time in the backline may be cut short with the Swans opting for a small forward line.

Forwards Sam Reid (quad) and Lance Franklin (heel) are missing for the Swans, with Towers missing the match with an eye injury.

They will be out to prove themselves against one of the strongest midfields in the competition.

KEY MATCHUPS:
Heath Grundy vs Tom Hawkins
Hawkins almost dragged the Cats back into the game the last time these two sides played at Kardinia Park, while Grundy was off the field receiving treatment for a cut to his head. With Melican still injured and Aliir an emergency, it falls to Grundy to take the powerfully built forward.

Luke Parker vs Joel Selwood
Parker was in terrific form in the first month of football but fell away sharply against the Crows on Friday night. Selwood escaped suspension at the tribunal and will face the Swans, full of confidence after his best-on-ground performance against Port Adelaide.

George Hewett vs Zac Tuohy
Hewett limited Tuohy’s influence and rebounding game the last time they played at Kardinia Park. Touhy still finished with 26 disposals but had 2 rebound 50s and 1 inside 50. Hewett will need to up his form to limit Tuohy’s output once again.

Nick Smith vs Brandan Parfitt/Patrick Dangerfield
Parfitt is a live-wire in the Cats forward line, and Dangerfield is a handful when he rests forward. In last years’ semi-final, Dangerfield torched Dane Rampe before Nick Smith was moved to him. Smith is the best small defender in the league and will need to be at his absolute best this Saturday.

THE SIX POINTS:
1: The last time these two teams met, Geelong dominated the semi-final. Dangerfield kicked 4 goals, 3 of them on Rampe in the first-half, with the Cats running out 59-point winners.

3: The Swans hold sway in the head-to-head’s since round 23, 2011, 7-to-6, winning five of the last seven matches between the teams; the Cats haven’t won consecutive games against the Swans since 2013.

4: The Swans line-up has changed significantly since round 20, 2017. They are without forwards Sam Reid, Kurt Tippett and Lance Franklin, while Dean Towers, Nic Newman, Lewis Melican and Dan Hannebery will not be playing.

5: Both sides are strong contested marking teams in 2018, Geelong averaging 11.4 while the Swans average 11.2, ranked fifth and sixth respectively.

6: Geelong is ranked 17th for inside 50s this season, the Swans 14th, averaging 50.8 and 52 each per game; expect the match to be played between the arcs.

IT’S A BIG WEEK FOR…
Kieren Jack - after a fortnight that has included 12 and 11 disposals against the Bulldogs and Crows, and six turnovers in his last match, Kieren Jack will be hoping for a stronger performance against the Cats and a return to form. 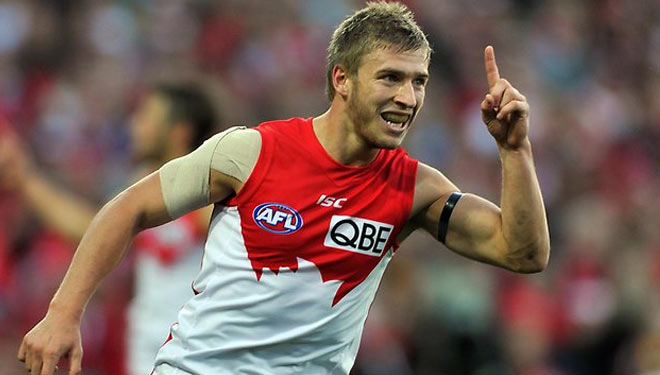 The Sydney Swans roared to life in the final quarter in their blockbuster clash against the Geelong Cats, kicking…