The Swans travel to the MCG for the first time this season, taking on their 2017 nemesis, the Hawthorn Hawks.

The rejuvenated Hawks have exceeded expectations early this season, sitting in fourth spot on the ladder with five wins from seven games, and a healthy percentage of 121, while the Swans hang on to eight after losing their third match from four at the SCG this year.

Former Swan midfielder Tom Mitchell has been a star for the Hawks this season, leading the AFL for disposals, is top three for contested possessions and averages the second highest AFL Fantasy Points, with 124.

Mitchell is equal first with Nat Fyfe in the AFL Coaches Association’s Champion Player of the Year Award after seven rounds, with 38 votes, while Swans ruckman Callum Sinclair is the best Swan with 20 votes.

The Swans and Hawks have fought out one of the great modern rivalries, with their last three games decided by a goal or less – 5, 6 and 6.

While the Hawks have dominated the recent head-to-head matchups, winning five from the last six, the Swans have won two of the last three matches at the MCG.

The weather bureau has forecasted dour, cold, windy and rain sodden conditions for their Friday night blockbuster clash, with rain, hail, possible thunderstorms and winds up to 40km/h expected.

It’s likely to be another low-scoring encounter between the teams, with the Hawks’ 12.9 (81) at the SCG last season, the highest score by either team in their last four encounters.

The Swans have been forced to play small with significant absences from their forward line, resisting the urge to debut youngsters Darcy Cameron, Joel Amartey or Tom McCartin.

Sydney are unbeaten away from the SCG this season and have lost just two away games since Round 7 last season, once to Hawthorn in Round 19, and once to Geelong in the semi-final.

They will need to find extra avenues to goals to beat the Hawks – while they’ve managed to win away games with, and without Buddy Franklin, they haven’t been ticking the scoreboard over regularly enough.

The difference between the two teams will be which team can generate the more dangerous scoring opportunities, and convert their chances, especially if the weather follows the forecast.

While Hawthorn have displayed more consistent form, they struggled to overcome challenges from St Kilda and Essendon, while conceding 75 first-half points to the Roos in round 5.

Callum Sinclair versus Ben McEvoy
Callum Sinclair has been the Swans’ revelation this season in the forced absence of Kurt Tippett and Sam Naismith, taking on sole ruck duties and flourishing, producing career best form and numbers. McEvoy has often been critical to giving the Hawks midfield first use and has been one of their best players this season.

James Sicily versus Gary Rohan
Hawthorn’s hothead James Sicily has been one of the Hawks’ players of the year, providing plenty of thrust and run out of their backline. Swans speedster Gary Rohan will need to hit him where it hurts the most – the scoreboard – if he’s to come out on top and lead the Swans' forward line to victory.

THE SIX POINTS:
1: The Hawks dominate the recent head-to-heads between the teams, winning four of the last five and nine of the last twelve since the Swans’ 2012 premiership. The Swans’ largest winning margin in that time has been 19-points, while the Hawks have won by 83, 63 and 54 points.

3: Until Round 5, Swans superstar forward Lance Franklin was leading the Swans’ and AFL’s goal kicking charts. Luke Bruest is the top ranked Hawk and 2nd in the AFL for goals this season with 20.

IT’S A BIG WEEK FOR…
In Lance Franklin's forced absence, Will Hayward has been superb for the Swans over the last two rounds, providing a genuine inside 50 target and kicking 6.2, moving to equal 26th on the leagues goal kicking chart with 11 for the season. Burton, Frawley, Stratton and Sicily will likely match up on him at different times during the match, if he can impact the scoreboard. 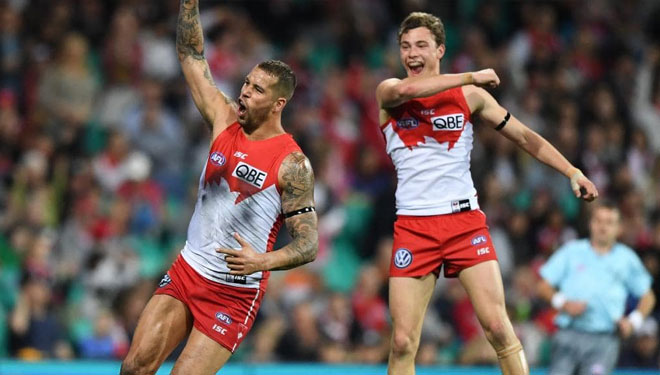 The Swans have swung the proverbial changes axe ahead the Hawks at the MCG on Friday night, with midfielder…