The Swans have swung the proverbial changes axe ahead the Hawks at the MCG on Friday night, with midfielder Dan Robinson making his second appearance this season, and young forward Tom McCartin making his debut.

Superstar forward Lance Franklin was unable to prove his fitness, having been given every opportunity to do so, while midfielder Dan Hannebery was ruled out early in the week.

Harry Marsh and Robbie Fox are the two omissions for the Swans, which lost to North Melbourne at the SCG last round.

“He's pretty hard, he can play with injuries but we didn't want to push it too much and put him at risk so we decided to can this week.”

18-year-old Tom McCartin had been starring for the Swans in the NEAFL competition, and coach Longmire said that McCartin’s debut was well-deserved.

“Tom really impressed us from the moment he turned up at the footy Club,” Longmire said.

“We just want him to compete and create a contest in the front half and it’s as simple as that. Anything more is a bonus.”

“He’s a great kid and comes from a great family and we’re really looking forward to his debut.”

McCartin has played in every one of the Swans’ NEAFL games, averaging 17 disposals across his last two games, while Robinson has averaged 35 possessions per game. 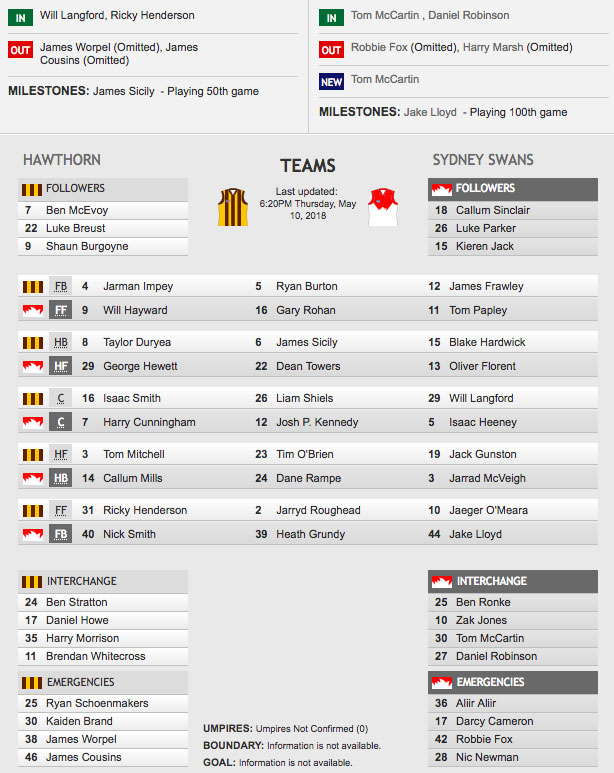 The Swans travel to the MCG for the first time this season, taking on their 2017 nemesis, the Hawthorn…