The Swans have made two changes to their lineup, with 18-year-old defender Ryley Stoddart making his debut against the Lions on Saturday afternoon.

Ryley Stoddart and Harry Marsh come into the side to replace Callum Mills (broken foot) and Gary Rohan (omitted).

Mills is expected to miss the rest of the season with a broken foot, suffered today away from the club.

"He was walking back from the café at Sydney Football Stadium here this afternoon after training, tripped and fell and broke his foot," Coach John Longmire said.

"It’s a really unfortunate accident and unfortunately he has an operation on Monday and he will be out for the rest of the year."

Swans coach John Longmire is confident Harry Marsh can step up and fill the void.

"He’s played some good senior football for us this year and his reserves form has been outstanding."

"He’ll be expected to play that role that Callum played."

Ryley Stoddart is the third player to make their debut for the Swans this year after Tom McCartin and Ben Ronke, having showed solid form the NEAFL.

Longmire was pleased that the Swans were able to introduce a third new player this season.

"It’s one of the great joys in footy as a coach to be able to tell a player that they’re playing their first game," he said.

"Ryley was great over the pre-season and played some senior football.

"He’s quick, he’s got some really good run, he can play a variety of roles and he’s a good kick and decision-maker.

"He has the trust of the senior players and we look forward to seeing how he goes." 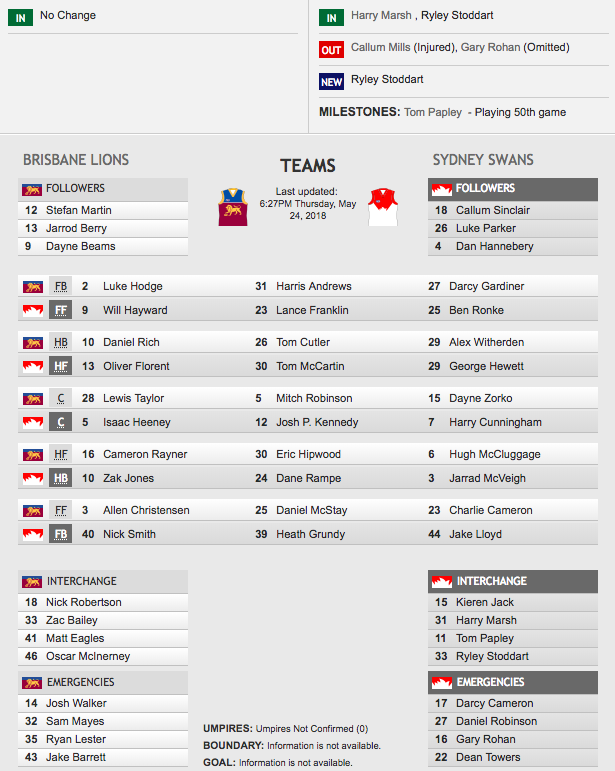 Good morning everyone, it is Friday and we’re 12 hours behind with the podcast, but it’s here!…