The Lions broke a nine-year losing streak against the Hawks last round and will be out to do the same on Saturday afternoon, when they host the Sydney Swans at the Gabba.

The Swans have dominated the head-to-head between the teams since the turn of the decade, having won the last 10 encounters since Round 22, 2009 – Brisbane’s last win.

The Swans were triumphant at home for the second time this season from five attempts, while the Lions won their first game of the season, beating Hawthorn by 56 points.

Dayne Zorko and Eric Hipwood are in terrific form – Zorko the highest ranked Lion on the AFL Schick Player Ratings (4th) while Hipwood is taking marks and kicking big goals.

Brisbane have been competitive in most of their matches, but have found winning an almost insurmountable obstacle, surrendering winning positions against Port Adelaide, Gold Coast, Collingwood and the Western Bulldogs.

They finally put their losing record to rest last weekend with an emphatic victory that made the league take attention.

While their stunning win echoes Sydney’s big win against the Lions in Round 7 last year, they’re going to have a significant challenge on their hands, with 5th placed Swans next up.

It hasn’t been smooth sailing for the Swans, with injuries and form concerns rocking the club from week-to-week, from Sam Reid’s quad injury to the latest setback, Callum Mills’ broken foot.

The defender is set to miss the rest of the season with the injury, handing a reprieve to defender Harry Marsh, who’s seen his role change over the season.

Fellow defender Ryley Stoddart makes his debut for the Swans, the third debutant this season, while exciting forward Gary Rohan makes way, with Swans Head of Football Tom Harley declaring that Gary Rohan must do more.

Lance Franklin is well and truly back for the Swans, performing a Lazarus last week, having been ruled out on Monday, with what was expected to be another one-to-two weeks recovery, only to be named 3 days later.

While it took a half of football for him to hit his straps, once he did, it was the Buddy of old. Jake Lloyd played a career-best game with 41 disposals, and McVeigh played his best game for years.

Dane Rampe versus Eric Hipwood
Giving away a whopping 14cmin height to Hipwood, the Swans backline general will have to top his excellent defensive efforts against Ben Brown to beat the tall full forward. Hipwood is in terrific form, with 14 goals for the season.

Lance Franklin versus Harris Andrews
The Lions will no doubt go the double and triple team on Franklin, with Matt Eagles another option to play on Franklin, and they may need to with Franklin’s history against the Lions. With 56 goals from 14 games, including his bag of 8 last season, the Lions may need to throw the kitchen sink at him to get the job done.

Dayne Zorko versus Harry Cunningham
Zorko’s in career-best form and is arguably the form player of the competition, off the back of his third massive game in a row. The Swans don’t really have a lock-down player to suit him, with Harry Cunningham, Kieren Jack, Zak Jones and even Dan Hannebery options throughout the match.

3: Dayne Zorko is in red-hot form and is the 4th ranked player on the AFL Schick Player Ratings, Lance Franklin is the top rated Swan at 3rd, almost 100 points behind Patrick Dangerfield and Dustin Martin.

5: Sydney are one of the better contested teams in the competition, ranked 7th with 1333, while the Lions are a long way back in 18th with 1225.

6: The Swans hold a strong advantage over the Lions in clearances, ranked 4th for total clearances and 3rd for centre clearances, the Lions are ranked 14th and 8th.

IT’S A BIG WEEK FOR…
With the shocking news Callum Mills broke his foot, Harry Marsh returns to the side ahead of Nic Newman and Aliir Aliir. With Mills gone for the season, nothing less than a red-hot purple patch will stave off his competitors. 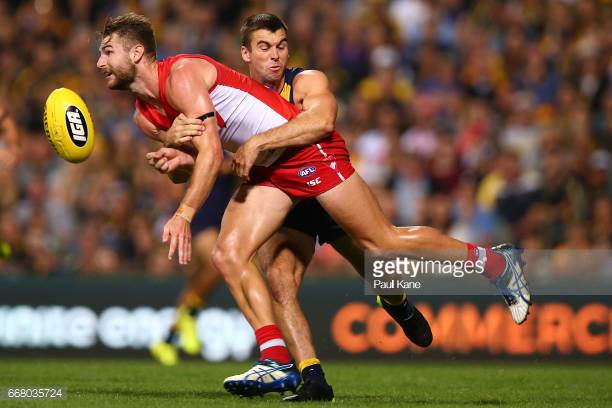 Report: Swans scrap their way to eleventh-straight win against the Lions

The Sydney Swans extended their dominant winning streak against the Brisbane Lions on Saturday afternoon, in a hard-fought scrappy…

Good morning everyone, it is Friday and we’re 12 hours behind with the podcast, but it’s here!…