The Blues return to the place of their last Swans murdering on Friday night, taking on one of the AFL Premiership Favourites, the Sydney Swans, at the SCG.

Marn Grook is an important round for the Sydney Swans, with indigenous stars Adam Goodes, Michael O’Loughlin, Lewis Jetta and Adam Goodes celebrated over the past decade. 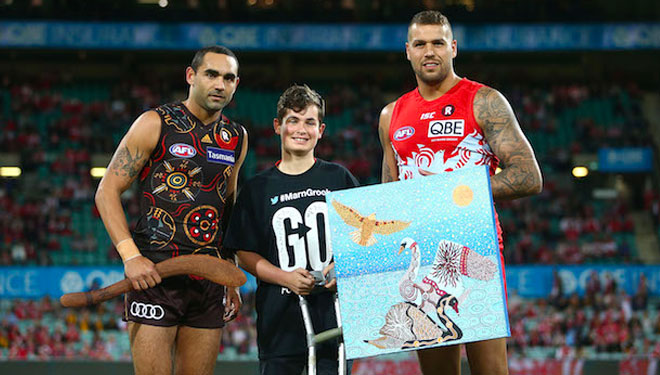 A repeat for the Swans would be heartbreaking, given their harrowing Round 6 loss to Carlton last year, amid their worst start to a season since 1994.

The Swans made them pay for their win in Round 23 last year, Franklin booting 10-goals to seal his fourth Coleman medal in the Swans 81-point romp at the SCG.

While Carlton would give themselves an outside chance, no one is giving them a sniff, given their respective form and positions on the ladder.

While the Blues held Geelong to just 73 points at home and recording more scoring shots, it’s hard to look at the result as anything other than Geelong cruising in second gear after the 5-minute mark of the first quarter.

Sydney dominate the head-to-head between the teams since 2012, winning eight of their last nine clashes, with Carlton’s win at the MCG last season breaking the streak of eight wins by the Swans.

There have been several close matches, most notably the final at Stadium Australia in 2011 and Josh Kennedy’s herculean effort in Round 18, 2016 to drag the Swans over the line by 6 points.

But when the Swans win big, it’s always off the back of a strong second half, with 10 or more goals kicked after half-time in their last four 60-points-plus wins.

Liam Jones will be eager to test himself against the premier forward in the league, but his recent form, especially against Tom McDonald was condemned by Fox Footy presenter Danny Frawley on his ‘Don’t come Monday’ segment on Fox Footy’s Bounce.

Carlton have a lot to prove, with gun on-ballers Ed Curnow and Patrick Cripps leading the way, while the Swans recall out-of-favour winger Nic Newman and forward Gary Rohan.

George Hewett versus Patrick Cripps
Patrick Cripps is in fantastic form in season 2018, backing up from two terrific seasons before, and is the top ranked Carlton player in the AFL’s Schick Player Ratings at 20. George Hewett on the other hand, struggled to find form earlier this season, but has performed admirable shut-down jobs over the last month on Nat Fyfe, Dayne Zorko and Tom Mitchell.

Ed Curnow versus Harry Cunningham
Ed Curnow is a barometer for the Carlton Blues – when he’s ticking, they’re threatening. He’s found joy against the Swans in recent weeks, so it falls to the Swans back-up stopper Harry Cunningham to curb his influence. Cunningham can get the job done, most recently neutralising Isaac Smith in the Swans’ fantastic 9-point win against the Hawks in Round 8.

Lance Franklin versus the entire Carlton Defence
Liam Jones will be having nightmares lining up against Lance Franklin this week – his recent form lead to the hilarious condemnation by Danny Frawley on Bounce after Round 9. He’s a terrific intercept player, but even like the best defenders, is hapless without help, or when the ball is camped inside the opponents forward arc. Lance Franklin may well play the decoy role this week, with Sam Rowe, Lachie Plowman and Jacob Weitering capable of doing a job. 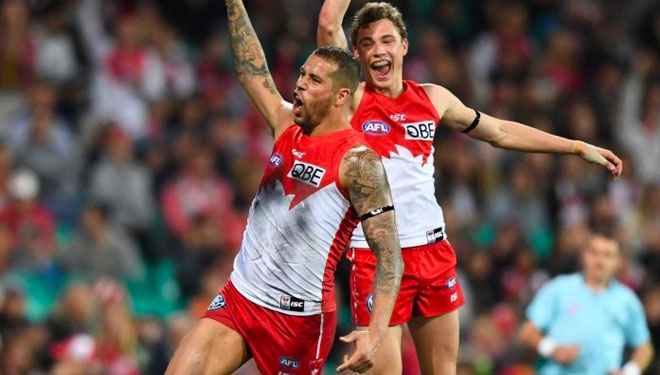 Dane Rampe versus Charlie Curnow
Charlie Curnow is an exciting young player and capable of hitting the scoreboard hard and fast. He’s a quick, athletic player that can take great marks and kick a bomb, but this week, he’s up against the best full back in the league. Rampe is in terrific form and will prove to be a worthy adversary.

1: Sydney hold an imposing record against Carlton since 2012, winning eight of their last nine matches, by an average of 43 points.

2: Sydney and Carlton met twice in 2017, Carlton winning the first clash by 6-points at MCG, while Sydney won by 81-points at the SCG in Round 23 to clinch a top-6 finals finish, with Franklin booting 10-goals to clinch the Coleman medal.

3: Carlton’s Patrick Cripps is the highest rated Blue on the AFL’s Schick Player Ratings, and the only Blue inside the top 25. Lance Franklin is the top-rated Swan at 3, while the Swans boast four players inside the top 25 – Josh Kennedy (12th), Isaac Heeney (24th) and Luke Parker (25th).

4: When the Swans win big, they thrash Carlton in the second halves of their clashes, booting 10 or more goals in the last four victories by 60-plus-points.

5: Carlton have struggled with possession of the ball all season, ranked 18th and 15th for average disposals and average contested disposals – the Swans are ranked 7th (381.5) and 6th (150.9) respectively.

6: Expect to see the ball spending a lot of time inside the Swans forward half of the ground, with Sydney leading Carlton in disposal efficiency (72-percent to 69-percent), rebound 50s (plus-5) and inside 50s (plus-4.6), as well as score differential (Swans plus-119, Carlton minus-380).

IT’S A BIG WEEK FOR…
Swans forward Gary Rohan was recalled after being dropped and publicly berated by Swans Head of Football Tom Harley for not working hard enough. He didn’t play in the NEAFL last week and will need to prove that he’s worth his spot in the side. 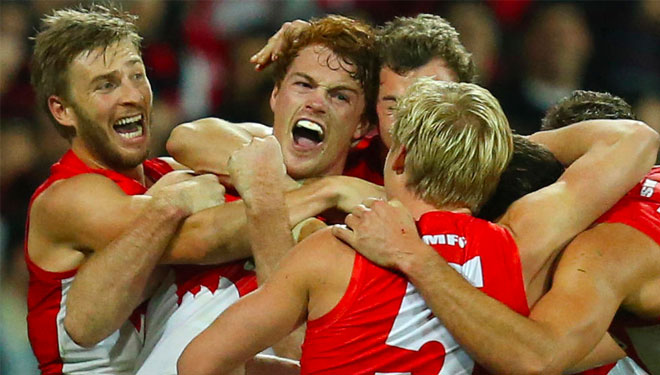 In a see-sawing battle at the SCG on Friday night, Sydney’s unanswered five goal burst in the third…