Well, we made it. Just. After looking like we might drop out of the eight altogether, the Swans pulled out a good bit of form, winning three from their last four matches - all against top 4 opponents. Our only loss was at the hands of the Hawks, without arguably our two best players in Lance Franklin and Luke Parker.

As good as ruled in by Head of Football Tom Harley on Tuesday afternoon, those two will definitely be playing against our little brother to the West, and we’ll need them. The Giants will be heading into the match with their own key personnel back, with Toby Greene, Brett Deledio and Zac Williams heading the list of possible ins.

Coming off a 45-point loss against Melbourne in the final round, they’ll come into this final with fire in their eyes, after losing the previous derby by 20-points in Round 22.

The term “do or die” gets thrown around a lot, but it definitely applies this week. Whoever loses at the SCG will say goodbye to their premiership hopes for season 2018, and hello to Mad Monday. The winner will look forward to playing the loser of West Coast and Collingwood.

KEY MATCHUPS:
George Hewett vs Lachie Whitfield
Fresh from a great stopping job on Brownlow-favourite former Swan Tom Mitchell - while collecting double-digit clearances and dominating, George Hewett looks to be set to cover another Giant this week. While he did an excellent job on Lachie Whitfield in Round 22, he could go to the more damaging Josh Kelly in his 100th game, or to one of Stephen Coniglio, Dylan Shiel, or even Callan Ward.

Dane Rampe vs Jeremy Cameron
The star Swan defender kept the Giants’ main target to just one goal and eight touches in their last meeting, but with Heath Grundy and Toby Greene back in this final, the matchups might be slightly different this time around.

Lance Franklin vs Phil Davis
It was a real arm wrestle between these two key players, with the tide turning for the Swans when Phil Davis went off with injury. Franklin kicked four goals in the second half playing on Jeremy Finlayson, Adam Tomlinson, and Nick Haynes as the Giants tried to curb his influence. Lance Franklin and the Swans can’t rely on another injury this time round.

THE SIX POINTS:
1: Both teams have crucial players returning for the match, but which team rolls the dice with changes could tip the odds in their favour. There's such a thing as too many changes, but with the Swans superstars Luke Parker and Lance Franklin near certainties to come in, the Giants have Toby Greene, Zac Williams, Sam Taylor, Matt De Boer, Brett Deledio, Ryan Griffen and Aidan Corr to pick from.

2: The Swans hold a strong advantage for accuracy in front of goal, ranked 5th in the league, compared to the Giants 14th. The Swans midfield and defence will need to restrict the quality of the Giants inside 50s to really add pressure, while the Swans small forwards apply massive pressure.

3: The Swans hold an advantage over the Giants in recent times, with an overall 11-4 record, winning their last three matches against the Giants. The only finals encounter was back in 2016 where the the Giants beat the Swans by 36-points in the 2016 qualifying final.

4: The match-up between Rory Lobb and Callum Sinclair could prove to be the deciding factor of the match. Sinclair has been on top in recent contests and proven influential. Both are decent ruckmen, without being in the same league as Brodie Grundy and Max Gawn. Both will want to use their contested marking to their advantage.

5: For the third time in the Swans' last four games, they're facing the No. 1 ranked clearance team in the league, with Callan Ward and Stephen Coniglio leading the way. While the Swans are ranked 9th in the competition for clearances, they beat the GWS Giants in clearances in Round 21 this year.

6. A Giant to keep an eye on is second year player Tim Taranto. He’s flown under the radar in a star studded Giants midfield, averaging 21.1 disposals, 6 tackles, and 5 score involvements per game. He was one of GWS’s best in Round 22, with 30 possessions.

IT’S A BIG WEEK FOR…
Well, everyone really. Neither team will accept a loss, and the pressure will step up another seven notches compared to previous performances. Players like Nic Newman will need to stay sharp, and not be in NEAFL mode where pressure is non-existent! 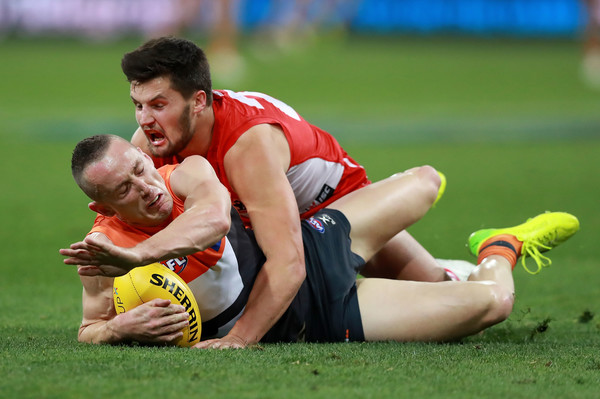 Prediction
The Swans have beaten more top eight sides than anyone else in the competition. It’s with that in mind that I tip the Sydney Swans by an optimistic 14 points.

You know that feeling you get when you go to KFC, you get the burger and chips, upsize it…

Well, that wasn't the way we wanted to finish the season off. Nothing quite like turning a 24-point lead…