The Swans have first shot at christening the newly named Marvel Stadium with another win against the Western Bulldogs on Saturday night.

Oliver Florent was the difference between the two sides in Round 4, 2018, booting the winning goal on the run in front of ruckman Tim English, while Luke Parker picked up the 3 Brownlow votes with 21 disposals and 3 goals.

The Swans went from strength to strength after their clash, entering the bye with a 10-3 record, before spectacularly crashing out of the top 8, while the Bulldogs struggled all year, finishing 14th with 8 wins.

Despite rarely training and nursing a heel injury, superstar Lance Franklin booted three second-half goals and was influential throughout, finishing with 16 disposals, 10 marks and 2 Brownlow votes.

Jack Macrae was one of the Bulldogs shining lights, picking up 34 disposals and regularly threatened to blow the game open, with Marcus Bontompelli bobbing up for 21 disposals and two goals.

The Swans will miss tough defender Nick Smith for the clash, but welcome back Sam Reid, Lewis Melican and Callum Mills, as well as debuts to Nick Blakey and Ryan Clarke.

Luke Parker vs Jack Macrae
Luke Parker's form throughout the JLT series looked close to his 2016 best, while Jack Macrae has improved every year. Both players are arguably their most important midfielder and will need to be at their absolute best if their side is going to win.

Aliir Aliir vs Tim English
The biggest surprise in the JLT Community Series for Swans fans was watching defender Aliir Aliir tear it up in the ruck. While he was never going to out muscle the bigger and stronger opponents, his leap and reach troubled his opposite numbers.

His ability to snap the ball out of the contest and sprint from the pack lead to a number of scoring opportunities for the Swans, and was reminiscent of former champion Adam Goodes.

Lance Franklin vs Easton Wood
The Bulldogs are short on defenders and Franklin is short on fitness. Will it make a difference for the big guy? If history is anything to go by, not a bit. Someone that can kick almost 60 goals while hardly training for an entire season is special, so Wood is going to have to channel his inner Phil Davis to have a chance here.

1: The last time they played, a 3-goal second-half burst by Franklin set the Swans up for victory. He had the unlikely match-up of Aaron Naughton in the first half, before blowing him away ten minutes into the third quarter.

5: Both Sydney and the Western Bulldogs struggled for hit outs in 2018, the Swans ranked 15th with 32 per game, while the Bulldogs were last with 27.8 per game.

IT’S A BIG WEEK FOR…
With such a bizarre team announcement, Aliir Aliir takes the reins as the named first ruckman, with Callum Sinclair enjoying his first run as a forward since 2017.

He's a supremely athletic player who showed glimpses of Nik Nat-like ability against the Suns, but can he do even better? He's going to have to against 205cm Tim English. 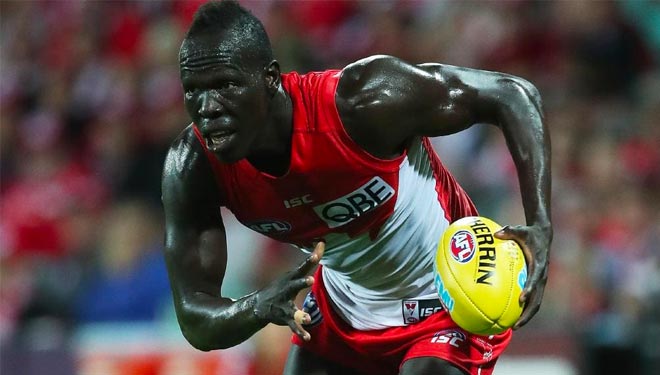