Good morning everyone, it’s Friday already and it’s time for another instalment of your favourite Sydney Swans weekend preview podcast, the SwansCast Extra.

We're back for our first episode of the year and it's a cracker, as we get Buddy Franklin in for the first game of the year, get our first real look at wunderkid Nick Blakey, and the usual suspects make their long awaited return.

It's a very different team this year. Dan Hannebery, Gary Rohan, Nic Newman and Dan Robinson all departed the club in the off-season, failing to survive the great Swans culling.

But not is all doom and gloom. The move to co-captains appears to have breathed new life into incumbent captain Josh Kennedy, who looked somewhat close to his best in the pre-season, while Dane Rampe and Luke Parker took it in their strides.

Luke Parker in particular looks to be chomping at the bit, his JLT Community Series form a particular highlight. Callum Mills impressed in the midfield after agitating for a move since his Academy days, while Isaac Heeney looks fit and ready for action.

It's a great change from the end of last season when the Swans were struggling to find fit players, let alone 22 that could stand upright.

Fittingly, we take on the Western Bulldogs on Saturday night who're sporting arguably the ugliest football guernsey of all time, embracing the Marvel theme of the so-called stadium.. erm.. Marvel Stadium. See it for yourself and decide. 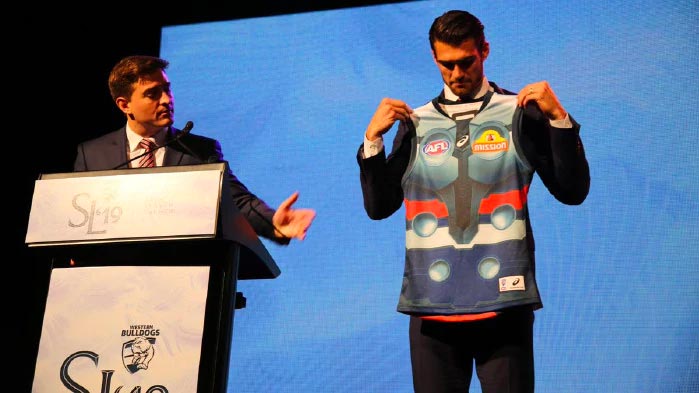 In case you haven't seen the team lineup yet, the Swans have gone for power in their forward line, calling down the spirits of giants and praying for a good showing.

It's been a long time since the Swans were able to field a competitive tall forward line, the last great one being 2014 with Adam Goodes, Lance Franklin, Kurt Tippett and Sam Reid.

Harking back to the good old days when the Swans would regularly score more than 60 points per game, they've gone into their season opener with Lance Franklin, Sam Reid, Callum Sinclair and Nick Blakey, all capable of kicking a bag.

Franklin and Reid in particular have a good record against the Dogs, with the pair combining for 10 goals in 2017, while Franklin claimed two Brownlow points in their last two clashes. If anything, he loves a feast and it looks like the Dogs have provided him ample protein to fill his belly.

But while we cast our eyes ahead to the eagerly anticipated clash, we should take a moment to pass on our commiserations to Richmond defender Alex Rance, who ruptured his left ACL on Thursday night against Carlton in his 200th game.

Richmond have been extremely lucky with injuries the last two seasons, Rance in particular, missing just two games through suspension in the last four seasons. Occasionally we all wish a bus would run him over for a quarter or two, but you never want to see a good player go down with an ACL injury.

He still has time and age on his size, and given his excellent track record with injuries over the years, there's every chance he'll make a successful recovery.

With our Swans watching hat on, we cast our eyes wide across the lands to St Kilda, where former Swans midfielder Dan Hannebery is plying his trade. One has to wonder if St Kilda is already regretting this trade, with coach Alan Richardson declaring that Hannebery won't be playing any time soon.

“He’s been getting sore anywhere to do with his legs," Richardson said on SEN on Friday morning.

“Particularly his calves and hamstrings, but as we’ve upped the load in terms of intensity, his body has just struggled.

“He’s had two years where he just hasn’t been able to put in the work.

“He’s gone out and played without great preparation because he’s been able to do that for a fair while, he’s a real warrior, he’s obviously been a champion player.

“I reckon it has caught up with him.

“To some extent he needs to be rebuilt."

“We knew that he had stints where he hadn’t played,” Richardson said.

“We knew about his training history, or lack thereof, that he’d really struggled to get the time in.

“Did we think it was going to be as significant as this? No, we didn’t.

“But we did know that we were getting in a bloke that we needed, to some extent, to rebuild. Probably not to this extent, but that’s OK.

“If it means he’s not with us for a month longer than we thought, that’s fine. We think overall he is going to be enormous for our group.”

In hindsight, it was one of the best trades the Swans have done since they've been in Sydney. You've really got to feel sorry for Hannebery and the Saints. He's a champion player and they desperately need him on the field, but he's so far off playing right now, 4 weeks in may as well be the moon for them.

In this weeks’ show, I'm joined by SwansCast regular, Steven Park. We preview the Swans match against the Bulldogs, discuss that horrific top, selections and AFL shenanigans, talk about what we're looking forward to, match-ups, key points, team changes, and give the weekend forecast.

It’s another great episode, so give it a listen, send us feedback, and if you love it, leave us a review on Facebook or Whooskaa, our podcast platform.

Enjoy the week and the episode! As always, hit us up on social media using the tag @theswansblog, or the hash tag #SwansCast and #SwansCastExtra.

Liked the show? If you would be so kind as to leave us a review or rating on iTunes, or subscribe, it would be greatly appreciated!

Enjoy the podcast and more to come this weekend.