The Sydney Swans turned in one of the performances of the season in 2018, in their thrilling 9-point, Round 21 win at the MCG.

Heeney's outstanding work off the ball, including taking what would become the Woolworth's Mark of the Year on top of Melbourne's spearhead Jesse Hogan, ensured the Swans came out on top in an epic final quarter struggle.

It wasn't as much of a tide, as it was a Melbourne avalanche in the final term, as the Demons went into the final break, staring down the barrel 28-point three quarter deficit.

They threw everything, including the kitchen sink at the ailing Swans, who were without defenders Alex Johnson (knee) and Nick Smith (hamstring) since quarter time.

Heeney's paltry numbers in the last quarter bely his impact on the game, taking four intercept marks, and keeping Demons forward Hogan to a single behind.

With the game on the line, his extraordinary performance earned him the 10 AFLCA Coaches votes, and the 3 Brownlow votes, one of coach John Longmire's master strokes.

Expected to challenge for the top-four again this season, the Demons have been one of the few teams to truly underperform, losing their three opening matches.

Anticipated to return to the winners list against the Essendon, they were utterly dominated in one of their worst first quarter efforts for some time, before hitting the front in a blistering second quarter.

Two more dreadful quarters has left their season on the brink, facing the Swans in a must-win Round 4 clash to keep their season alive.

After disappointing losses against the Western Bulldogs and Adelaide, the Swans bounced back with a hard-fought win against an improved Carlton.

Missing veteran Jarrad McVeigh (322 games) for the next 8 weeks and young forward Will Hayward (43 games, 1.3 goals per game) for the next 4 weeks, the Swans have turned to former captain Kieran Jack (248 games) and debutant Justin McInerney, playing his first game of football, to fill the gaps.

McInerney marks the 19th player to debut for the Swans in the last 3 years, with only the Brisbane Lions have more debutants.

Harry Cunningham vs Christian Petracca
While Christian Petracca was one of Melbourne's best players last season, he hasn't quite reached the lofy heights he set for himself. Averaging 16 disposals and a goal a game, it won't be long before he explodes back to form and Melbourne start winning games.

Cunningham has had many run-with jobs in the past, but few will be more important to ensuring victory. If Petracca gets the ball, Melbourne will be very hard to stop.

Tom McCartin vs Tom McDonald
Tom McCartin was the surprise move last week, but it was another one of coach John Longmire's master strokes. He was superb on Mitch McGovern and had a good game overall.

Normally, this would be a match-up for Dane Rampe, but with Jake Melksham in the side, Braydon Pruess and Max Gawn sharing full-forward duties, it has fallen to McCartin to take on Melbourne's talisman.

Lance Franklin vs Sam Frost
Sam Frost was superb the last time the two sides met. Lance Franklin was well and truly held out of the first half, before exploding to life in the third quarter. In the end, Franklin won the battle, but it was a hard one.

With Oscar McDonald down on form and slim pickings all round, Frost will need to be at his best to limit the influential Swan, who'll need to fire to guide the Swans to victory.

1: With the SCG turf under heavy scrutiny, it is vitally important the players pick the correct boots. Throughout 2018 and even in the first home game against Adelaide, the slippery turf up-ended too many players.

2: Lance Franklin has never lost to the Melbourne Demons, in all of his 15 games. The Demons have always been one of his toughest opponents, averaging just 2.8 goals per game.

3: The Demons recorded their best quarter of the season against the Bombers, kicking 7 goals-to-2 in the second quarter.

4: Despite failing to register a win yet this season, Melbourne are third for contested possessions, averaging 162.3 per game, with the Swans languishing in 15th (138.3).

5: Sydney beat the Demons last time played by keeping the ball off, recording 38 more marks. The Swans are ranked 5th in the league for marks (94.7 per game), while the Demons are ranker 18th (62.3)

IT’S A BIG WEEK FOR…
None other than Callum Sinclair who will take on the giant pairing of 208cm Max Gawn and 206cm Braydon Preuss. 200cm Sinclair will have his work cut out to negate their influence in the contests and around the ground. 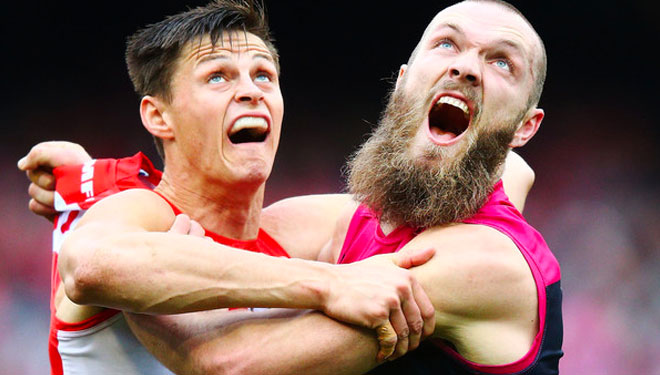